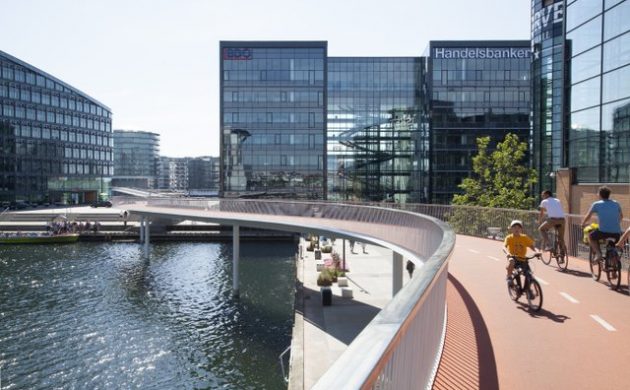 Cykelslangen bicycle bridge to get some company on Copenhagen’s waterfront (photo: Visit Denmark/Kim Wyon)
April 7th, 2021 11:30 am| by Christian W

Copenhagen has seen quite a few bicycle bridges pop up across its waterfront area in recent years.

And if it were up to Mayor Lars Weiss, another one will see the light of day in the near future.

The latest edition would stretch from Nordre Toldbod (behind the Maersk headquarters building) across to Refshaleøen on Amager.

“Copenhagen is the world’s best city for cycling and it needs to maintain that status,” said Weiss.

“A bicycle bridge between the city centre and Refshaleøen will help pave the way for cyclists on Refshaleøen and the coming district of Lynetteholm – and make it easier for Copenhageners to get around the whole city by bicycle.”

Evaluated by 2022
The first step for the new bridge is to investigate prime location options and potential costs associated with its establishment.

The evaluation is scheduled to be completed sometime in the autumn of 2022.

Refshaleøen has become an immensely popular destination in the capital in recent years – a development that will be further compounded when Lynetteholm is ready.

The massive Lynetteholm artificial island project is expected to house around 50,000 citizens and connect the two districts of Nordhavn and Refshaleøen with a harbour tunnel that will continue on to connect to the existing E20 Øresund Motorway.

Read more about it here.