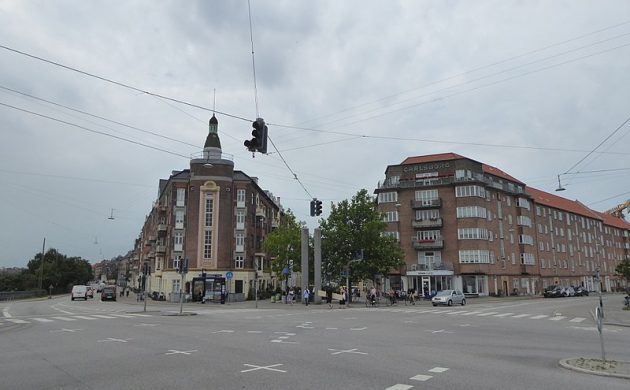 Since a costly 2019 upgrade – which replaced a traffic light and introduced a new, extremely wide cycle-path – the junction at Yrsas Plads near the Fisketorvet shopping centre has become a nucleus of chaos for cyclists and drivers.

And now politicians have had enough of all the problems and agreed to inject a further 3.5 million kroner into improving traffic safety at the intersection, where three streets converge to send thousands of cyclists across Dybbølsbro every day.

Diagonal direction
The City of Copenhagen’s Technical and Environmental Administration has confirmed that a two-way cycle path will cross the bridge diagonally. This ‘transverse path’ will be the first of its kind in Denmark.

The administration finally conceded that the layout of the Yrsas Plads junction, despite ongoing adaptations, has not proved to be “sufficiently safe and secure” for cyclists and pedestrians.

A report highlighted how the layout gave rise to “conflicts, unsafe situations, illegal road user behaviour and great dissatisfaction among road users at the intersection”.

Another  three years, then
As well as the new diagonal cycle path, the lights at the intersection will be changed and reprogrammed to give cyclists and pedestrians priority over cars.

An eight metre-high sculpture on Yrsas Plads by the sculptor Erik Heide will be moved to make way.

The original 100 million kroner development of Dybbølsbro was completed in October 2019,  and it is believed the new work will be finished by December 2022.

Lyngby residents advised to get tested after corona variant discovery
Lyngby-Taarbæk Municipality has advised anyone who have been near certain properties on Lundtoftegårdsvej in Lyngby to be tested for coronavirus – specifically addresses located between numbers 29 and 37. The Danish Agency for Patient Safety is investigating after a family on Lundtoftegårdsvej tested positive for an unidentified strain. It’s yet to be confirmed whether it’s the South African or Brazilian variant. Last week, residents in outer-Østerbro were encouraged to get tests after an outbreak of the Brazilian variant.

An easier way to sort waste
Some 750 new sorting points for waste are being placed around Copenhagen, a city whose green agenda hopes to see it become the world’s first CO2-neutral capital by 2025. Up to 34,000 homes in Copenhagen lack the space to sort waste, but it’s hoped that public sorting points will make it easier for Copenhageners to sort their trash and reduce the need for waste burning. Ninna Hedeager Olsen, the technology and environment mayor,  welcomes the prospect, which she sees as an important step towards the 2024 goal of recycling 70 percent of all household waste. Yesterday, the City of Copenhagen launched a website with an interactive map where Copenhageners can propose for themselves where the sorting points should be located. Construction work on the first sorting points is expected to start in early 2022.

Connecting the Metro to the S-train: The Østerport passage is open
One and a half years since the opening of the Metro, a passage between the Metro line and the old part of Østerport Station, where S-trains and regional trains run, has been completed. Additionally, new escalators connect the subway and the station at street level. At Østerport, there are two Metro lines: the M3 City Ring, which runs in a circle linking the bridge districts with Frederiksberg; and the M4, the line between Orientkaj in Nordhavn and the main railway station, which will be extended to Sydhavn in 2024. The Metro company described the difficulty in connecting the old, listed station to the new Metro – difficulties that were exacerbated by corona restrictions. Further work will continue on the station into the summer.

Short notice for Albertslund schools
Parents in Albertslund were not able to send their children to school yesterday, the municipality confirmed to TV2. Over Easter, the local incidence rate exceeded 200 infected people per 100,000 inhabitants – the threshold for concern. Albertslund Mayor Steen Christiansen moved fast to announce a program of emergency childcare at the schools for parents unable to provide care. From April 12, municipalities will have the final say on local school closures –  currently, the authority lies with the Danish Agency for Patient Safety. Schools are currently unable to open in the following Greater Copenhagen municipalities: Ishøj, Brøndby, Albertslund, Høje-Taastrup, Rødovre,, Fredensborg, Halsnæs and Vallensbæk. Helsingør, just north of the capital region, is also affected.

High transmission rate closes schools in Rødovre
Schools and leisure facilities in Rødovre Municipality had to close on Tuesday due to a spike in positive cases. The last week has seen 84 cases of infection in Rødøvre – taking the incidence rate up to 207.2 – which, on Monday, was the fifth highest in the country.