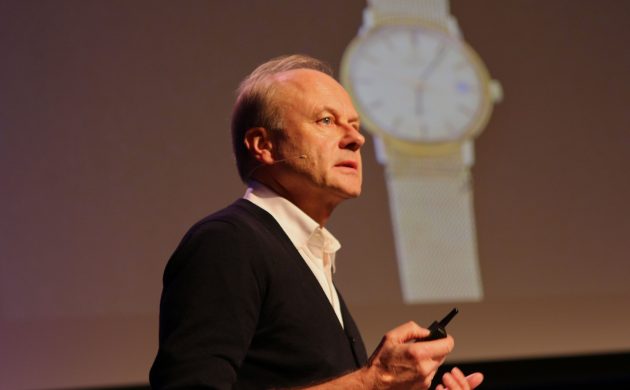 Is that the clock ticking on Finn Skårderud’s career as a serious practitioner? We doubt it! (photo: Flickr/Arbeids- og sosialdepartementet)
April 26th, 2021 12:00 pm| by Ben Hamilton

Ahead of ‘Druk’ winning the Oscar for ‘Best International Feature’ earlier today, the country’s biggest two news outlets, DR and TV2, were battling to see who could produce the best feature to whet the nation’s appetite for glory at the Academy Awards.

The pair took on a similar subject, namely how sound is the science behind Thomas Vinterburg’s ‘Druk’, but with wildly different approaches.

While TV2 went all-out gonzo, sending one of its journos on an almighty bender to see if her sterile writing might improve a bit when she was blotto, DR chose a more scientific approach, catching up with the Norwegian shrink whose research inspired the film’s main contention in the first place.

Seriously good for voxpops!
If TV2 journalist Amalie Rud Seerup’s boring introduction to her story is anything to go by, she must have sobered up by the time she wrote it.

Like the characters in the film, her editor strong-armed her into working her way through a day with a constant blood alcohol level of 0.5. Her first drink duly went down the hatch at 9 am – sorry make that two, as she drank a beer with a vodka chaser, taking her level up to 0.19.

“It felt almost like Christmas to drink alcohol in the morning: like a feeling of freedom,” she recalled.

Two more beers followed on an assignment outside the office (normal practice among journalists, surely), and a fourth back in front of her computer. Another half at 12:30 took her to 0.66, at which point she finally elected to eat breakfast.

Work meetings followed, and then finally the money shot: a voxpop on Strøget at 3 pm. Down at 0.46, she had a quickie at Rådhuspladsen before the onslaught. “I felt like I had better chemistry with the people I interviewed. I had no inhibitions and it was easier for me to connect with them,” she noted.

But back at the office, she bombed out until clocking off time at 17:30. Vodka, dinner, beer, vodka, even more vodka and football training then followed – with a beer hidden in a water bottle (we’ve all been there).

“It was insanely hard to play football. I couldn’t understand what the coach was saying, so I was really relieved to be going home,” she said.

But really, it was hardly Hunter S Thompson, was it.

Expert “enthusiastically misquoted”
Norwegian psychiatrist and psychotherapist Finn Skårderud, meanwhile, has once again insisted his claim that humans would function better if their natural blood alcohol level was 0.05 percent higher was never a serious theory.

He maintains the claim was something he wrote as part of a preface to a book on the psychological effects of wine around two decades ago – and that it applied to situations when some creative thinking might be required.

“After the first or second glass you understand what the real issue is. You could quickly conclude that humans are actually created with about minus 0.5 per thousand. Sad. After that ‘first and second glass’, everything falls into place,” he wrote.

It wasn’t widely reported at the time, but some years later, during the Norwegian cucumber season, a journalist happened upon the claim and wrote a story that quickly went viral. ‘Druk’ co-writer and director Thomas Vinterburg was among those to notice it on Facebook and the rest is history.

“I felt enthusiastically misquoted and very frustrated,” Skårderud told DR. “I am a doctor and psychiatrist who treats people with serious alcohol problems and often meets their families, so it’s a bit belittling to be referred to as some kind of alcohol prophet.”

However, his stance changed when he was sent the script for ‘Druk’ and invited to meet Vinterberg over a glass of wine in Copenhagen to discuss his thesis. He wasn’t about to poo-poo their entire film!

“I get sent this exciting manuscript, and we met in Copenhagen and drank a few glasses. I think we reached a per mille of 0.5,” he laughed.

“I think it’s a great movie. It’s rich, complex and has great acting performances, so right now I’m just proud to have been near the project.”