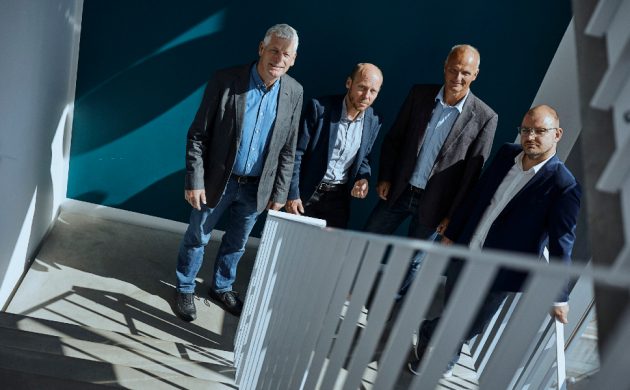 The team behind the research (photo: BioInnovation Institute)
May 5th, 2021 11:43 am| by Lena Hunter

Cancer researchers from Rigshospitalet and the University of Copenhagen have developed a chemo treatment that destroys cancer cells from within in a strategy pegged as a ‘Trojan attack’.

The promising new technology is being backed by a staggering 380 million kroner investment with the intention of beginning human trials.

The focus is on improving treatment of late-stage cancers with typically poor prognoses: cancers of connective tissue or bone, for example, which are notoriously difficult to treat.

All lab-mice cured
“The data is very promising. Early trials were surprisingly effective – in fact all tumor-bearing mice were cured after treatment with the first version of the drug,” said Behrendt.

“Our experiments show that the protein receptor we’re using was particularly active in connective tissue cancer cells and in certain subtypes of brain cancer,” said Engelholm.

“If our invention proves to be able to help people with these cancers, then all the years of hard research work would be worth it.”

New enzyme discovery combats high cholesterol, cancer and infertility
Researchers from the University of Copenhagen and the University Hospital in Bern have managed to control a group of enzymes that affect metabolism, paving the way for treatment of hormonal imbalance diseases such as high cholesterol, infertility and certain cancers. “We can activate or deactivate proteins with different functions – just like the conductor controls his orchestra. Imagine a violin that controls testosterone levels, a saxophone that affects cholesterol in the body, and the cello that is implicated in cancers – we can direct them now, “explains associate professor Nikos Hatzakis, who is leading the research project. The findings have been published in the journal Nature Communications.

Fish in a barrel: 6.4 million kroner sensor will monitor fish-farm welfare
A three-year collaboration between the Technical University of Denmark (DTU) and fish-farm equipment supplier Danish OxyGuard will develop a new sensor that can monitor the water quality in land-based fish farms. As land-based fish farm production increases worldwide, so too does the concern around microplastics and other impurities in seafood. In fact, many types of particle can be problematic for sensitive fish. “We hope the sensor will provide an early warning of even small changes in the water matrix,” said senior researcher Adam Hambly. The Innovation Fund has supported the project with 6.4 million kroner until 2023.

Researchers discover method to turn whey into food preservative
Researchers from the DTU Food Institute have grown a lactic bacteria on whey that can be used to generate the widely-used food preservative nisin. Nisin prevents the growth of microorganisms that spoil food – spores in canned soup, for example – without affecting the taste. The discovery means that the large volumes of whey that are a by-product of cheese production can now be recycled into nisin. Many dairies already extract protein and lactose from the many tons of whey they produce for use in breast milk substitutes and sports nutrition. Now the residual whey from those processes can be used too. There’s money to be made in the nisin business: the price per kilo for a commercial preservative, which contains 2.5 percent nisin, is approximately 300 kroner.

Mangroves and seagrasses absorbing dangerous amounts of microplastics
A new study by the University of Southern Denmark has thrown light on the extensive damage caused by microplastics in coastal zones. The research examined mangroves and seagrasses, which are found on coasts all over the world and which constitute an integral part of the ecosystem. The plants have been found to absorb and store microplastics with a mechanism similar to CO2 storage. Samples were taken from three coastal areas in China, where the mangroves and grasses are home to local varieties of fish, crabs, mussels and birds. “The denser the vegetation, the more plastic is captured,” said professor of coastal ecology, Marianne Holmer. Not only can microplastics cause suffocation, they can transmit bacteria, environmental toxins or pathogenic substances to living organisms. The study found microplastic concentrations in mangroves to be 17.6 times higher than is considered safe for dependent wildlife.

Denmark’s largest battery will store green electricity in stone
Construction is starting on a remarkable new energy plant that will store renewable energy in stone. The 35 million kroner GridScale plant will be Denmark’s largest electricity store, and is supported by the Energy Technology Development and Demonstration Program, EUDP. The electrical energy is stored as heat in the rock. The method involves super-heating and super-cooling crushed pea-sized basalt in insulated steel tanks. The heat can be stored in the stones for many days before being converted back into electricity. It’s cheaper and more efficient than storing electricity from solar and wind in lithium-based batteries, which can only supply energy for up to four hours. GridScale storage technology can supply energy for up to a week. It’s yet to be confirmed whether the prototype warehouse will be built in south or west Zealand or on Lolland-Falster.

First patient receives new treatment for prostate cancer
Aarhus University has carried out the world’s first treatment of a new type of radiotherapy called focal brachytherapy. In the pioneering procedure, plastic needles with a radioactive source are inserted directly into a cancerous nodule on the prostate using advanced scanning techniques. The therapy is being tested on patients with recurrent cancer. “Focal brachytherapy is a more accurate and gentle treatment than other forms of radiation therapy. Because the technique is so precise, you can reduce the side effects,” says Simon Buus from the Department of Cancer at Aarhus University Hospital. “External radiation therapy cannot be given to relapsed cancer patients again because the organs around the prostate cannot tolerate high radiation doses again,” explains Buus. “We hope that with brachytherapy we can cure 50 percent of relapsed prostate cancer patients.”