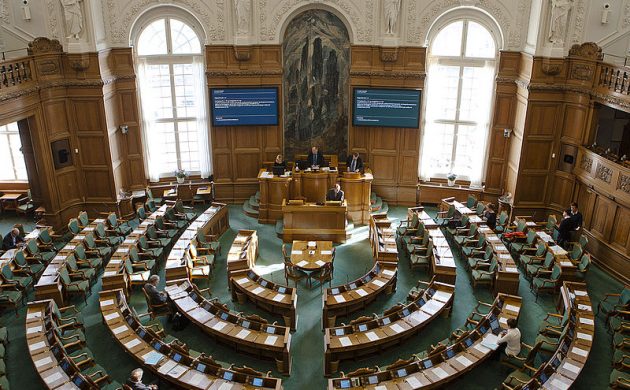 Expect today to be a busy one in the Danish Parliament as it is the final day of debate until it closes for the summer ahead of reopening in the autumn – the concluding day of the 2020-21 parliamentary year in fact.

We make it 103 speeches in total …
From 09:00 in a packed hall this morning, onlookers are expecting a huge free-for-all, with all manner of issue up for debate as, one by one, the political spokespersons of each party are given 10 minutes to address the hall. Responses mean each section can last up to 45 minutes.

The PM then speaks for 30 minutes, followed by a long period reserved for responses to conclude the ‘first half’ of the proceedings, and then the political spokespersons return, this time for five minutes with, yes, time reserved for more responses, before the PM gets another 15 minutes.

And on top of that, non-attached members get the opportunity to speak … twice.

Traditionally it is a day when not only does the government-led Red Bloc argue a lot with its Blue Bloc opponents, but infighting also has a habit of breaking out. Later in the day especially, expect Dansk Folkeparti to be at loggerheads with Nye Borgelige, and SF and Endhedslisten to come to blows too.

Corona: the neverending source of contention
Much should be debated about the coronavirus today.

CPH POST has heard that assembly rules could end up being revised a little this week, which could end up benefiting venues anticipating interest in the forthcoming Euro 2020 tournament, which starts next week on Thursday June 10.

The growing public discontent over the situation with the vaccines will be another hot potato. The debate today should give us a clearer idea of whether the discarded jabs might be adopted again to speed up the efforts to cover the whole country.

Regardless of what happens in that department, MPs will point out that the country is on course to fully vaccinate all over-50s by the middle of July – the point the PM, back in the spring, said would be safe to discontinue pretty much all restrictions.

Plenty of other issues up for debate
Also up for debate will be issues in the immigration sphere: the failed plans to establish a centre on Langeland for criminals marked for deportation and the insistence that Syria is safe enough to receive asylum-seekers who have called Denmark their home for over five years and counting.

The proposed shake-up of the benefits system, foreign policy including the recent espionage allegations, the climate arena and country vs city issues will also get a thorough airing.

The debate has a habit of continuing all day – often past midnight – so don’t be surprised if you wake up tomorrow to plenty of headlines regarding political in-fighting, possible corona restrictions breakthroughs and concessions that one course of action probably wasn’t the right one all along.