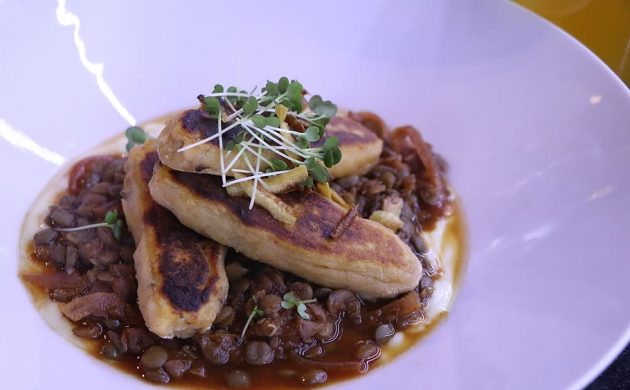 Researchers are close to recreating the coveted ‘crack’ of meat sausages in a plant-based, skinless alternative (photo: pxfuel.com)
June 11th, 2021 7:02 am| by Lena Hunter

The University of Copenhagen and DTU are working together to produce new categories of climate-friendly plant-based foods with protein from rapeseed, yellow peas and oats – crops currently used for animal feed.

A third of the world’s arable land is used to grow animal feed, but we could feed 4 billion more people without increasing land use or pollution if those same crops were used to feed humans.

“Animal protein has a really good nutritional composition, flavour and mouthfeel. Our plant-based alternatives must be as enjoyable as meat is to many of us,” said project manager Dennis Sandris Nielsen from the Department of Food Science at the University of Copenhagen.

From feed to food
The first project, PROFERMENT, ferments peas and oats to create the meat-like flavour and texture Nielsen describes. Meanwhile a combination of bacillus bacteria and various moulds will be used to increase their nutrient content and bioavailability.

The second project, SEEDFOOD, will research the basic properties of rapeseed to investigate how it could be used as a source of protein for humans.

“Many plant proteins lack the essential amino acids that we need, but the content is actually quite high in rapeseed,” explained project manager Marianne Nissen Lund from the Department of Food Science at the University of Copenhagen.

Cracking the vegan ‘crack’
DTU is also working with Copenhagen food producer Rootly on a recipe for plant-based, skinless sausages.

As any aspiring green chef will know, vegan sausages break easily during frying and lack the coveted ‘crack’ when bitten of meat sausages.

So far researchers have produced a prototype that holds its shape in the pan. The next challenge is to scale production up to a commercially viable level – without losing the crack.

Female voices perceived as less competent on video calls
Research by SDU and the University of Magdeburg suggests that women’s voices are perceived as less competent, expressive and charismatic than men’s on video conferencing tools like Zoom, Skype and Teams. Researchers analysed the social reactions of groups using the software, which is unable to transmit all audio frequencies – particularly affecting higher-pitched voices.

Babies exposed to parabens may have reduced fertility
A study from the Odense Children’s Cohort at SDU and Odense University Hospital (OUH) is the first to show that three-month-old infants who have been exposed to parabens in the womb have some measure of decreased fertility. Parabens – preservatives used in creams and cosmetics – are suspected of being endocrine disruptors that can also impact hormone levels. Some have been banned from use in cosmetics. Parabens were banned from children’s products in Denmark in 2010.

Drones catch porpoises hunting like lions
Porpoises are usually spotted alone, but new research by SDU suggests that they enter into a sophisticated collaboration when they hunt. The revelation is a result of 44 hours of drone footage from the waters around Funen, where porpoises were observed hunting in a manner that implies they share information and co-ordinate their actions by taking on different roles. Collaborative hunting is seen in lions, fossas, wolves and jackals, but the difficulty in observing sea-predators means researchers cannot confirm whether orcas and dolphins exhibit the same behaviour.

Current climate predictions affected by new ice-age data
A study of 20,000-year-old air bubbles trapped in Antarctic ice has revealed that temperatures were markedly different during the last Ice Age 20,000 years ago than previously believed. The University of Copenhagen played a significant role in the findings, which have ramifications for predictions of the rise of global sea levels. Current projections are based on reconstructions of past climate events. The new data will allow scientists to build more accurate climate models.