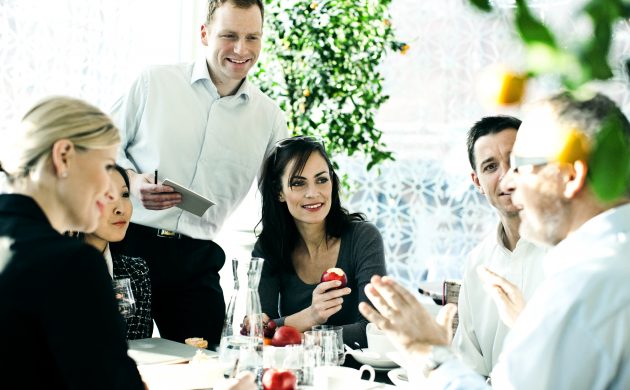 The first day at work in Denmark started for Holly from Australia with a tour around the office and ended with a trip to the canteen and the advice that “we all take the stairs down and up for lunch.” Now, she starts every day with a morning coffee chat, and on Fridays breakfast is served at work.

“It’s all extremely different to what I’m used to. I would have previously slacked off these kinds of habits, but it’s actually so lovely and made me feel super welcome.’’

The Danes are crazy about meeting and lunch is just another excuse to meet up, according to Gert Tinggaard Svendsen, political science professor at Aarhus University. ‘’With food, you have an excuse to meet. You meet at a regular time when you are hungry – the same time every day, which creates kind of a tradition.’’

More than a meet-up – it’s about trust
But Svendsen also says it’s more than just a lunch meetup. “Danes believe this tradition of having lunch – or occasionally breakfast or cake – makes you a better co-worker.’’

It’s all to do with the fællesskab – a new concept for foreigners, but extremely important for Danes. But what is ‘fællesskab’?

In answer, Svendsen returns to the high level of trust in Denmark – it’s the secret behind why Denmark is such a well-functioning country. In his book on the feeling of trust in Danish society, Svendsen claims to have solved the puzzle of Nordic success. His motto: “Control is good, but trust is cheaper.”

The fællesskab also has to do with trust. “It makes people feel safe. People will contribute and help each other. The feeling of fællesskab is togetherness. When you meet a Dane, you know he knows the common social understanding of the fællesskab norms, and that you can trust him,’’ says Svendsen.

Former prime minister Poul Nyrup Rasmussen once said that it is rare to see a Dane with a knife in one hand, without a fork in the other. The Danes at the office have rundstykker for breakfast, kanelsnegle with their coffee and lunch together in the canteen. Usually just a quick sit-down, but enough time to ask how your co-worker is doing.

And that’s what is most important about the fællesskab – the small talk with your co-worker. The ultimate fællesskab feeling makes you feel comfortable and safe at work – like you can talk to everyone. It creates a better working atmosphere because colleagues co-operate better.

Unwritten rules
But these social norms are unwritten, and can be hard to understand – let alone find out about – for a foreigner, because the Danes are on autopilot when it comes to fællesskab.

That was what Judita found when she was a guest teacher at Aarhus University. “I spent most of my time in the office, so my trajectory was office, kitchen, coffee, office. I always ate my lunch in the office. Nobody told me to “come with us to the canteen”.

“In December I met one Danish colleague – I saw her before several times – and she was very surprised. She said ‘wow, you are here? I thought you were already gone weeks ago as I didn’t see you in our canteen! Where have you been all those months?’”

For other expats the ‘lunch rules’ were spelled out, like at Kleo’s office. “I was told that I always need to spend my lunch break with colleagues and that I shouldn’t look at my phone during lunch, because lunchtime is meant for socialising.”

Bogi from Hungary experienced that she needed to take the initiative when it came to lunch. “Just ask if you can sit with them for lunch and if they want to speak English with you, they will always say yes. Danes are the nicest and most helpful people I know.”

Actions speak louder than words
“It’s not something you can write down and study. It’s something you need to experience,” says Svendsen. His best tip is to surround yourself with Danes: Not only to find out about what the fællesskab is and why this feeling is important in Danish society, but also because it’s important to do stuff outside work.

‘’That’s how I got recommendations to buy a SUP board, for example.” Sport is usually a sure conversation-topic, he says.

And if you want to become really popular at work, Svendsen has a good tip: bring cake! In creating the fællesskab-feeling, actions speak louder than words – especially if it involves food.

“It’s a signal that you’re giving something to the common pool, which ties the group together. You are not the one bringing cake every day. You do something one day, something else another day. In this way everyone will provide collective goods for the group.”

No forced hygge
But it’s important to keep in mind to do it because you like it. “The fællesskab-feeling will only be there as long as it’s voluntary. “Nobody should force you,” says Svendsen. “If you have forced fællesskab, then you don’t have hygge. It won’t be nice.”

Fællesskab is a broad concept. “Give yourself some time to get to know it – maybe within a year you’ll know what the feeling is like. In the meantime join the lunches at work and remember that trust and togetherness are key,” he concluded.