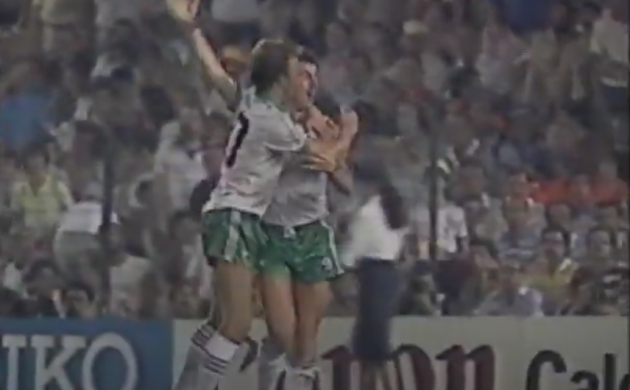 The ongoing European Championship throws my mind back to a holiday I spent with my Danish in-laws in Mayo during the 1982 World Cup.

Behold the sun of Mayo
Given that most Danish summers are more Mr Monsoon than Scorchio Scorchio, it’s no surprise that most Danes are secret sun worshippers.  It’s a religion. They may pretend to go to a Christian church, but their true god is ‘Sol’.

When my wife Hedi went anywhere, it was to the sun. So when she agreed to check out some Irish palm trees, it was going against her religion.

She was giving up her guaranteed sunny holiday and going to ‘Tir Na Nog’: a place of magic, mystery … and heavy rain.

Like Xmas but no telly
So we were off. To a pair of custom-made Irish cottages and the ‘Wild Atlantic Way’. To ‘Majestic Mayo’. To ‘Ballycastle in the Sun’.

The June weather was rough. We are talking nothing but black skies overhead. Without a radio or television, the turf fire became the focal point of the holiday.

Singing Christmas carols did not endear me to the sun-worshippers. It rained and howled constantly. The wind whistled through the newly-built cottages.

The mood darkened to such an extent that I’m sure Scott or even Shackleton could have rescued the moment with a witty story of survival among the heavy ice drifts and perilous polar landscape.

Firelight fables of old
I regaled my wife with legends about Belmullet Peninsula, where it was said dinosaurs still roamed, watched by the last known holdout of Irish cavemen.

I told her how it was an intrepid Irish monk called Columbanus who had discovered America.

And how it had been scientifically proven in California that Irish monks not only saved European civilization, but also taught the Vikings how to sail.

This last story went down like suntan lotion in an Arctic storm.

As punctual as the flu
But Hedi was not a bit interested in Celtic legends, even if they were told by the flames of a romantic burning turf fire. She was also uninterested in pubs, pints and places to have a cup of black, sugar-free tea. How anyone could spend hours sitting in those dark dens of iniquity defied all sense of her logic.

Hedi was up at 6am-sharp to do her housework. Lunch was at 12 noon-sharp, dinner at 6pm-sharp. She also had no detectable sense of humour. Okay, she did have one joke – one that ended with the punch-line “You drive me Cheese.”

You could say that Hedi was made to order for the slip-sliding lifestyle that is holidaying in Ireland.

Oh Gerry, Gerry
This was to be put to an extreme test during the Ballycastle Fair on the day when Northern Ireland were playing Spain in a crunch World Cup game.

The Mother-in-Law bought fish for a very special dinner, and the girls went home to cook the fish with promises, sworn in blood, that we would be home for dinner at 6pm … sharp.

Samuel Goldwyn once said that a verbal contract is not worth the paper of pub piss it’s written on. This is a golden truth. Our blood-sworn, piss-soaked promises evaporated under the dual attack of Gerry Armstrong on the front-line of the Northern Irish football team and Arthur Guinness in the back bar of Polkies.

Spain put to the sword
If pulling pints of Guinness is a form of poetry, then drinking them must be art in motion. As we watched Northern Ireland win the match, we disregarded the clock.

There were a lot of angry young mountain men in the town that night, and a Dublin accent wasn’t the best one to have on such occasions. So Peter, the bold Danish Father-in-Law, was pushed up to order our pints. This went down very well with the natives. He didn’t talk like a Dub. So he must be … okay.

It was hitting 2am when I dragged him away-sharp I reminded him we still had to go home and face the fisher-women. We bought a couple of bottles of Snowballs and peanuts.

Bonding, cold-shouldering
This I explained was the peace offering: a cunning ploy I learned from my Dad. It worked every time. Our story, though, was caught up in the magic of the moment, and we could not break the spell nor leave our new friends.

When we eventually poured into the cottage, the two women were sitting in silence poking the dying embers of the turf fire. I delivered our peace offering without breaking anything or falling into the fire. I retold our story. Including the heroically graphic details of a truly wondrous and soul-bonding night. Peter had made friends for life.

We were given the hard, cold shoulder and sent hungry to bed.

Time to save the Titanic
Next morning we were suffering, as I explained to Peter, from what is known as the bad pint syndrome. It’s an imperfect world, and among all those creamy works of poetry we consumed last night was hidden ‘The Banger’.

The only known antidote, besides hitherto undiscovered exotic herb plants deep in the South American Jungles, was of course to go back to the scene of the crime and consume more creamy works of art and just hope for the best.

It was at this moment, as our Titanic Irish holiday of a lifetime was fast approaching its submerged iceberg of discontentment, that I decided to introduce Hedi to one of the true wonders of an Irish summer: a glass of cider.

Tourist-targeting travellers
Cider has a much ill-deserved reputation as the preferred drink of the travelling people of Ireland: those carefree children of the road who always seem to drive around in brand new white Ford vans, whose only visible means of support seems to be grubby women and even grubbier kids with no dress sense.

They speak their own language, which sounds like a mix of Chinese and Esperanto, but isn’t, tormenting tourists with their immortal phrase “Spare a few ould Cop-purrrs, for the Baaaa-bee.”

These are the people who have made cider infamous – a drink with a kick as strong as a ‘Knacker’s Armpit’.

With a few ciders inside her …
A glass of cider was just the thing, I thought, for my Mother-in-Law. It’s just what she needs: a cool summer drink on a cool summer’s day.

I slipped out and stocked up on a few bottles of Bulmer’s and Hedi began drinking. “Mmm,” she said. “Apple-juice.”

“Yes,” I said. “Of a sort.” By the time I remembered its ‘Knacker’s Armpit’ potency, both had downed a few glasses, as I watched on horrified, witnessing the total disintegration of my beloved Mother-in-Law.

We immediately packed her off to bed.

Slept like an Irish wolfhound
Next morning Peter informed us she had spent most of the night running around on all fours, trying to eat the wallpaper off the walls.

From that day onwards, she slept in late and became, dare I say it, more Irish. She learned the tricks of holidaying in Ireland: like keeping your coat on when you visit people in Dublin, either to stay warm or ready to head for the pub.

She reluctantly admitted to me, years later, that she actually enjoyed her time in Ireland.

I’ve often wondered what changed it for her. Was it ‘The Wild Atlantic Way’, ‘Majestic Mayo’, ‘Ballycastle in the Sun’, or even ‘Dublin’s Fair City’.

More likely, it was ‘The Whiff of a Knacker’s Armpit’.