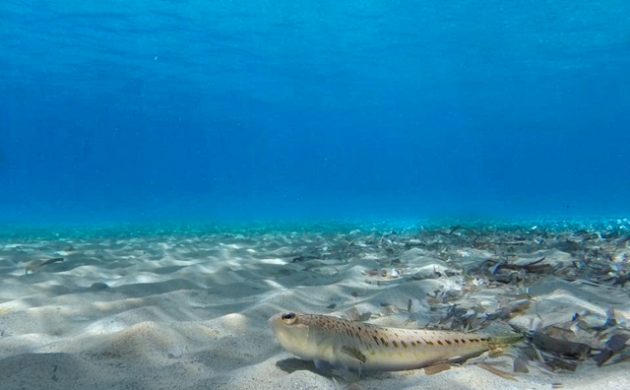 The fish often digs itself into the sand, so it’s almost impossible to see. (photo by: Filippo Fratini)
July 15th, 2021 3:06 pm| by Kasper Grandetoft

While the hot summer weather invites for a dip in the ocean, authorities warn swimmers to be careful of the large invasive greater weever – a large poisonous fish that can hide beneath the sand.

Large amount this year
The number of fish that have been spotted this year has been unusually high – especially in northern Zealand near the shores of Øresund and Storebælt.

“If you visit the shores of northern Zealand and walk into the ocean at the right time, within a few metres you’ll be able to see hundreds of greater weevers lying closely together in the sand,” said marine biologist Jens Peder Jeppesen, the head of the Øresund Aquarium.

“So, the amount of fish is pretty extreme compared to previous years.”

“If you’re stung, it will be exceptionally agonising. Sometimes, swimmers in deep waters can get so shocked by the pain, they almost drown,” said Jeppesen.

Since the fish often digs itself into the sand, it can be practically impossible to notice.

Take precautions
The authorities encourage people to learn about the greater weever’s behaviour and to take precautions before jumping into the water.

“When a foot is above the fish, it’ll raise the spikes so they go into the foot if you step on it. A good method to avoid it is to buy a pair of bathing shoes,” said Jeppesen.

The greater weever tends to be scared away by activity in the water, so it might also be a good idea to not be the first to go in.

A sting from a greater weever is rarely serious, but results in intense pain.

Heat decomposes the poison. In order to ease the pain, therefore, the stung area should be placed in hot water (40-45 degrees) for about 30-60 minutes.

The spikes should be removed and the wound washed thoroughly with water and soap to lessen the chance of infection.

Sometimes the spikes contain bacteria that will need treatment with antibiotics, if an infection occurs in the days after the sting.

The pain can remain for up to 24 hours and swelling can last for several months.

If the symptoms continue, seek the help of a doctor or call the poison hotline, Giftlinjen, at 82 12 12 12.