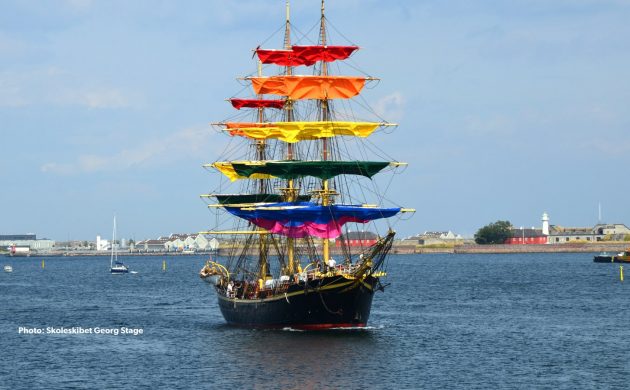 Anyone who’s ever read the HC Andersen tale ‘The Emperor’s New Clothes’ knows that looking your best in public is not something you can take for granted in Denmark.

Energy company Ørsted thought it had won the unofficial Copenhagen 2021 beauty competition when it adorned three turbines in the colours of the rainbow flag.

READ MORE: Copenhagen 2021: If we could turbine good times!

The Øresund Bridge then upped the ante by lighting up its 203.5 metre-high pillars in rainbow colours to “help illuminate the strength of diversity, cross-border co-operation and everyone’s right to love whoever you want on both sides of the strait”.

Yeah, just in case anybody on either side of the strait was in doubt that a major 11-day LGBTI+ festival was going on in their midst!

You’ve got this ‘Bridge People’!

Flattering horizontal stripes
But they hadn’t reckoned on the owners of Georg Stage, a Danish vessel that has been providing maritime education to young people since 1935, and now diversity guidance to a much wider audience.

Over the last week, docked in Islands Brygge near the Sports Village, the fully rigged, steel-hulled sailing ship has served as the figurehead of EuroGames.

And for the occasion, the owners were delighted to allow her to be decked out in horizontal rainbow colours.

Normally on the flag, the colours run vertically, and in fashion circles, the jury’s still out on what looks more flattering.

Georg Stage wasn’t complaining, though: in that outfit, she was the undisputed queen of the entire festival.

Tragedy in water polo tournament as French player loses his life
The opening day of EuroGames on August 17 was mired in tragedy when a 35-year-old French water polo player died shortly after playing a game. Etienne Burguy was given immediate medical help at the pool in Bellahøj and then transported to hospital where he died. Following lengthy consultation with the other players, it was decided to continue with the tournament in honour of Etienne, who one Twitter user described as “one of the greatest and kindest persons I have ever met … who helped and coached beginners at Paris Aquatique like no-one else”.

Largest LGBTI+ rights event since the beginning of the corona pandemic
The recently concluded WorldPride 2021 Human Rights Conference in Malmö and Copenhagen drew the largest attendance for a LGBTI+ rights event since the beginning of the corona pandemic, reports Washington Blade. More than 1,000 LGBTI+ activists from around the world were in attendance. “We have activists coming from all over the world to this conference,” confirmed the WorldPride 2021 director of human rights, Aron Le Fevre. “My team has worked tirelessly to create one of the largest LGBTI+ human rights forums in the world.” Furthermore, the conference was the first in WorldPride history to dedicate a full day to the challenges facing LGBTI+ refugees, borders and immigration. In total, 215 of the activists received scholarships in recognition of their efforts.

Football coach honoured by LGBT+ Danmark for Euro 2020 comments
Kasper Hjulmand, the Danish national football coach, has been named ‘Årets Laks’ by LGBT+ Danmark in recognition of his defence of human rights during Euro 2020. Hjulmand’s comments followed complaints by the Hungarian government after the Allianz Arena in Munich, the venue for Germany vs Hungary, was lit up in rainbow colours. UEFA appeared to take Hungary’s side, but not Hjulmand. “We are born equal, and we celebrate diversity, and we celebrate that everyone is equal,” he said. LGBT+ Danmark praised the coach for his “unequivocal support for and defence of the right to be who you are”, and Hjulmand responded by saying he was “happy and proud to receive the award, but it means even more to me if it can focus on the challenges we have, help and make a difference”.

Generous Nordea-fonden makes the difference
Nordea-fonden handed over a grant of 1.455 million kroner to support the recently concluded EuroGames, one of the two main components of Copenhagen 2021. The funds helped support both the program, which included 70 public sports events, and the Sports Village, which inhabited Islands Brygge. Held under the banner ‘Sports to the People’, the games were contested by over 2,000 competitors. Meanwhile the public could try their hand at the likes of pitch and putt, dodgeball, boxing, petanque and kayak polo near the Sports Village.