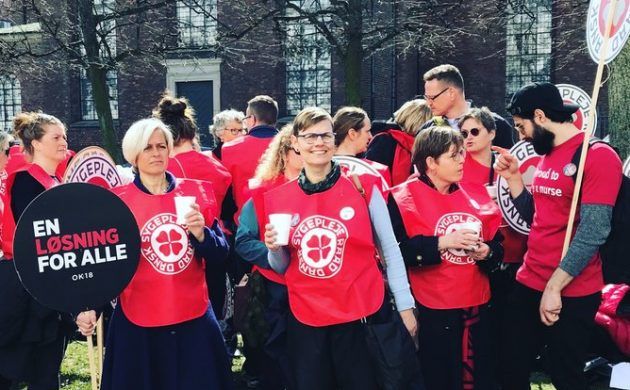 A little over a week has passed since the government intervened to end the nurses’ strike over wages and working conditions. But dissatisfied healthcare workers continue to stage walkouts in defiance of an agreement that they say makes no meaningful change.

READ MORE: This Week’s Editorial: Soldiers out, nurses back

In March, nurses rejected a government offer of a 5.02 percent wage increase over three years. On June 13, they rejected a mediation proposal that would maintain the current pay scheme but work towards a committee to examine wage structure in the wider public sector.

On June 19, 5,350 nurses – around ten percent of the workforce – went on strike in protest of the pay deal. The strike lasted ten weeks.

But despite the government stepping in to end the strike, nurses at Rigshospitalet will continue to take a stand. From Monday to Wednesday between 07:45 and 08:45, nurses from various wards will refuse to work.

The nurses at Rigshospitalet are not the only ones to continue to protest after the official end of the strike.

On Monday and Tuesday last week, nurses at Aarhus University Hospital also stopped work for an hour. On Friday, hospitals in Roskilde and Horsens followed suit.

All risk, no reward?
Although hospitals all over the country have shown solidarity, there are now higher stakes for nurses who choose to take a stand.

“At first they risk getting a fine and, if they continue, an even higher fine. If they keep on striking they could be fired,” said Bent Greve, a labour market professor at Roskilde University.

That’s because, in Denmark, you cannot simply refuse to work. A legal agreement called ‘fredspligt’ (duty of peace) prevents employees from doing so “unless they have a legal basis for it in their collective agreement”.

Essentially, both employer and employee agree not to rock the boat.

“Therefore, nothing can come of these new walkouts. There was an official labour dispute, it is over. Parliament has intervened. In that situation, one must expect everyone to abide by the agreement reached,” said Greve.

He went on to highlight that both the Danish Nurses’ Council and union representatives have a duty to encourage employees to resume work.

Growing rifts
Though Kristina Robins, chair of the nurses’ union Danske Syplejeråd (DSR) for the Capital Region, understands the nurses’ frustration, she distanced herself from the strike.

“I have to strongly dissociate myself from the fact that the nurses are making non-contractual strikes,” she said.

An email response from the body that employs the nurses, Danske Regioner, was yet more condemnatory.

“The strikes in breach of the collective agreement are a great inconvenience to the patients. If they continue, we may take the case to the labour court to have the people in question sentenced to a fine,” it read.

Staying strong
Despite the message from Danske Regioner, Pristed maintains the strikes from Monday to Wednesday should proceed.

“Of course we expect to get the fine, but I can’t imagine that Rigshospitalet would fire those who show up. We simply cannot play by the rules any more. We tried to use the Danish model to strike and fight for better conditions and better wages. It has not worked.”

Disappointed nurses go back to work
But Greve is less optimistic, pointing out that breaching agreements has not historically been an effective way of contesting working conditions.

“It is not going to change the decision that has been made,” he concluded.

On August 27, when Parliament forcibly ended the strike, the previously rejected proposals were imposed: nurses will receive a 5.02 percent wage increase over the next three years – the same deal as all public sector workers – and a committee will examine general public-sector wage structure.

Following the strike, the DSR decided to increase membership fees for members to “cushion the organisation for future collective bargaining negotiations”.

For many of Denmark’s nurses it’s a disappointing return to work after months of protest in which little has been done to assuage feelings of anger and injustice in the healthcare sector.