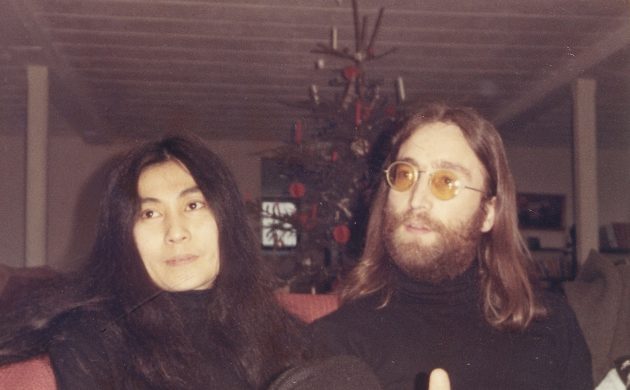 Yoko and John and the Danish Christmas tree they danced around
September 7th, 2021 10:20 am| by Ben Hamilton

The year of 1969 was coming to an end, and it had been eventful.

Man walked on the Moon, the world of music bid farewell to Judy Garland and Brian Jones, followers of Charles Manson murdered Sharon Tate, the wife of film director Roman Polanski, and several others in the Hollywood Hills, and Ted Kennedy took ten hours to report an accident on Chappaquiddick Island in which a young woman lost her life.

The Beatles were still together, but only just. Taking a break from the music,  John Lennon and his new wife Yoko Ono quietly travelled to Denmark on an unannounced visit to track down the Japanese artist’s five-year-old daughter.

The long and winding road
For all their music, in-bed peace protests and art film collaborations, a great proportion of Lennon and Ono’s life together was spent trying to track down her former husband Anthony Cox and their daughter Kyoko.

While Lennon and Ono successfully located Kyoko near the remote north Jutland town of Thy in December 1969, this wasn’t the Hollywood ending either might have envisaged.

Cox would continue to disappear underground, at one point into a cult, to the extent that Ono’s 1971 meeting with her daughter would be her last for 27 years – and her step-father’s the final one of his lifetime.

Imagine if it hadn’t snowed!
For Jesper Jungersen, a 16-year-old Dane living in the area, Lennon was not only a pop idol but the voice of his generation, and when he and three friends discovered he was staying nearby, they knew they had to act.

Sure, if this was an American film, the kids wouldn’t have got permission from the headteacher at their school, Skovgårdsskolen near Brovst, and just sneaked off under some pretence to interview the “filthy long-hairs’, but this was Denmark, and their plans were utterly endorsed.

They paid a local van driver 30 kroner to take them to the isolated farmhouse where a press conference had been called for 5 January 1970, but a last minute change of location, to a venue 70 km away, and an unexpected blizzard, delayed them somewhat.

It turned out to be their advantage.

Come together
Confronted by the late schoolboys, Lennon and Ono were only too happy to oblige them with a lengthy, informal interview – and later this month, on September 28 at 16:00, Bruun Rasmussen Auctioneers will be selling the tape recording along with a collection of photos of the occasion, which were taken by Jungersen.

The 33-minute recording includes fragments of two songs. One is ‘Give Peace a Chance’, the couple’s mantra of the moment, and the other is a never published song entitled ‘Radio Peace’.

Additionally, Lennon and Ono can be heard humming along to Danish Christmas songs as they dance around a tree with the boys.

Across the universe
“This is the first time ever that an interview by John Lennon and his wife Yoko Ono has come up for Live Auction, and we expect a great interest in the collector’s item,” predicted Alexandra Nilsson, a valuation specialist at Bruun Rasmussen Auctioneers.

“For me personally, it has been surprisingly moving to hear Lennon’s voice. It feels incredibly present and not as if it was recorded 50 years ago. Unfortunately, his message about world peace is still very necessary, and one can only imagine that today he would be spreading the same message if he were alive.”

Lennon’s message about world peace in the recording is simple: make local efforts.

Will you still need me … when you’re … 68
The Beatle was responding to a question from the ‘journalist’ Karsten Højen, who went on to write an article about the interview in his school magazine, which is also included in the lot.

“Back then, we were not as preoccupied with fame and famous people as young people are today. Instead, we saw John Lennon and Yoko Ono as political prophets and symbols of peace. The two celebrities shaped our generation and the entire counter-culture movement,” recalled Højen, now 68, about the day.

“All four of us split up after completing our education at Skovsgårdskolen, and our shared experience slipped a little into the background of our memories. Now we are all quite a bit older – and tapes and pictures do not have as great a value for our children and grandchildren. Therefore, we decided that it should be sold at auction to someone else who will appreciate it.”

Not exactly instant karma
In total, Lennon and Ono stayed for a month at the farmhouse near the village of Vust. As well as their interest in discussing the future of Kyoko with her elusive father, they were affiliated with the experimental ‘Æ Verdensuniversitet’ program in Skyum Bjerge – the town the interview was moved to.

It was only six days into their visit that rumours began to spread that they were here. And once a local newspaper in Fjerritslev confirmed the story, the area was besieged by the world’s media.

The couple accordingly agreed to hold an official press conference. And had it not been for a timely blizzard and rescheduling, four 16-year-old classmates would have sat at the back and missed out on the experience of a lifetime.

Since 2002, the tape of the recording has sat in a bank vault waiting for a rainy day.

Give Peace a Chance: John Lennon and Yoko Ono in Denmark from Bruun Rasmussen Kunstauktioner on Vimeo.