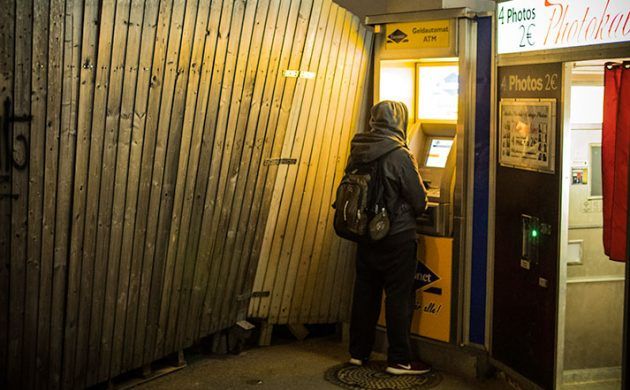 What do you see? A criminal with a hoodie committing card fraud, or a nervous student hoping he doesn’t get mugged straight after? Always the former, say the residents of Nordvest (photo: Sascha Kohlmann)
September 9th, 2021 3:34 pm| by Ben Hamilton

A study carried out on behalf of Copenhagen Municipality among young residents in Nordvest reveals that most of them tend to overestimate how many gang members aged 15-18 are living in the city district.

Not in gangs, not always on the streets
On average, the participants in the survey estimated that 20 percent of the age bracket are in gangs. In reality, just 2 percent are.

Additionally, they estimated that over 50 percent of the youngsters spend most of their free time on the streets. In reality, only 9 percent do.

They also underestimated how many were still in the education system (51 vs 76 percent).

Risked normalisation of gang membership
The study’s author, sociologist Aydin Soei, was both vindicated and disturbed by the results.

“When, for example, there is a perception that 20 percent of the peers in the district are gang members, it can constitute a risk factor in relation to the normalisation of gang membership,” he said.

“Although prejudices say otherwise, young people in the Northwest actually have a rich leisure life. They educate themselves, take care of their jobs and pursue leisure activities, but if no efforts are made to improve the young people’s self-understanding, myths and negative expectations can easily become a reality.”

She said the prejudice is “contagious to young people’s perceptions of themselves” and earning the area “an undeserved bad reputation and a stigma”.

She warned that political action is needed to ensure “negative prejudices do not turn into a self-fulfilling prophecy”.

Plans to pedestrianise climate quarter in Østerbro hit stumbling block
A few blocks off Lyngbyvej in the direction of Østerbrogade, just along from where Jagtvej takes a right to follow the perimeter of Fælledparken, you’ll find the Sankt Kjelds Kvarter – the so-called Klimakvarteret (climate quarter). City Hall wants to close the area off to traffic – initially as part of a pilot scheme until 2024. However, opposition is mounting from the right-wing parties, as the area provides a useful shortcut to motorists and they fear closing off the area will cause traffic jams. Ironically perhaps, but right at the heart of the Climate Quarter is a roundabout!

Østerport Station: the Metro stop that has never properly opened
Metroselskabet has defended the time it has taken to fully realise the plans of the new Metro City Ring stop at Østerport Station, which opened to the public in the autumn of 2019. Its proposed pedestrian tunnel has still not been completed, whilst detours and diversions are still the norm for most passing through the area. One of the difficulties, explained Metroselskabet employee Helle Dahl Andersen, the construction site manager, to TV2, is the difficulty of working in such a “small, narrow construction site” made worse by the “S-trains speeding past just outside”. Corona didn’t help either. But now it looks like the ground level work could be completed by the autumn holiday.

Tweaking the traffic to optimise the trip for Lynetteholm-bound trucks
Copenhagen Municipality and By & Havn want to improve conditions for vehicles passing over from the city centre to Amager in anticipation of a huge increase in heavy goods traffic in 2023. In that year, an estimated 314 trucks a day will cross Langebro, along with 184 trucks across Knippelsbro – an annual toil that won’t stop for decades as the earth needed to build the man-made island of Lynetteholm is transported over. The authorities want to encourage the trucks to favour Langebro over Knippelsbro and will accordingly rejig traffic lights, widen lanes and make more lanes available at the Christmas Møllers Plads and Uplandsgade/Vermlandsgade intersections.

New hotel to open in former home of Nordea and B&W
A new five star hotel has opened at Strandgade 7 by Knippelsbro in Christianshavn. Until 2017, the NH Collection Copenhagen served as the headquarters to Nordea, but it has now been renovated: 4,000 sqm have been added, including a new seventh floor, an expanded ground floor and a restaurant facing the harbour. Owned by ATP Ejendomme, the original 33,000 sqm building was constructed between 1957 and 1962 based on a design by architect Palle Suenson. It was originally the HQ of B&W.

Bird-proof bins could rectify scenes of litter Armageddon
It’s easy to presume that Copenhagen is a city full of litterbugs, such is the mess that often greets early morning commuters. But very often, the culprits are neither teenagers nor drunks, but birds. Most are searching for food, but some have other motives: in some cases, swans have built entire nests out of trash! City Hall’s Technical and Environmental Administration intends to rectify this by placing protective wiring on the bins. The bird-proof bins will hopefully be in place midway through 2022.

Fatal stabbing in Nørrebro on Tuesday evening
As of Wednesday, police in Nørrebro had been unable to inform the relatives of the victim of a fatal stabbing on Tuesday evening some time after 22:00 on Hans Tavsens Gade in the city district. They have therefore released a description. The man was 26, Syrian, and almost bald with a full black beard. He was wearing a gold necklace, black Nike trainers, blue jeans and a black Levis t-shirt. The police are appealing for witnesses. It is believed the man was an asylum-seeker.

No more free corona tests for commuters entering Sweden
Commuters entering Sweden from Denmark will no longer be able to access free corona tests once they cross the border. They will either need to be fully-vaccinated, to have been infected in the last six months, or have taken a recent test in Denmark. Under-15s are exempt. The free tests in Sweden have cost Region Skåne more than 100 million Swedish kroner since the pandemic began.