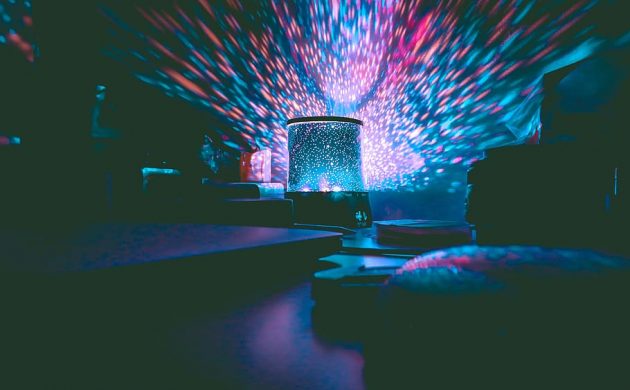 Make no mistake: ‘English Speakers’ is an intelligent script. And there were elements of its staging that were borderline ingenious. I have no doubt it will be heard by a much wider audience, either as a podcast, or potentially as the script for a piece of animation.

But in Lille Scene at Skuespilhuset on Thursday night, most of the duration of this 75-minute pre-recording was endured in the dark. Bar the odd flashing light, the experience is 95 percent audio-sensory.

For a similar experience, you could just sit at home and listen to the podcast with your eyes closed.

A little dizzying
Of course, at home, it would be hard to surround the audience with ten speakers, each with their own light display and performer.

Five minutes into the performance, the actors start to count to ten (each assigned their own number) in different variations of old Norse, charting the development of the language into modern day English.

As the voices circumvent the room, the effect is thrilling, albeit a little dizzying. It underlines the potential of what’s coming: perhaps the complete absence of physicality won’t hold it back, and it will create its own dynamic.

Not for the squeamish
Nine or other ten words are given the same treatment as the numbers. There are insights and music, and occasional moments of humour, but not much.

Perhaps the subject matter is too good to belittle with cheap laughs. The circulatory delivery of the actors is so powerful at times, it’s like we’re hearing our ancestors utter these common-place words for the very first time: ‘Wife’, ‘Husband’, the integral words of our existence that end in ‘th’, the most offensive word in the English language …

Among the voices, Sue Hansen-Styles as the narrator and David Bateson as the chief agitator stand out, but it’s only half a performance in the dark.

Perfect for the pandemic
Sara Hamming should be applauded for her creation, but I’m not sure this staging is worthy of your time, when you could just switch on the podcast at home.

The subject matter is certainly thought-provoking, but at no point did it feel like the audience was as gripped as they might be by a visual display.

Podcasts are getting more popular, of course, but how many would we bother with if pressing play first involved rushing to the theatre and then traipsing home in the dark.

This was one theatre performance that needn’t have waited for the lifting of the restrictions.