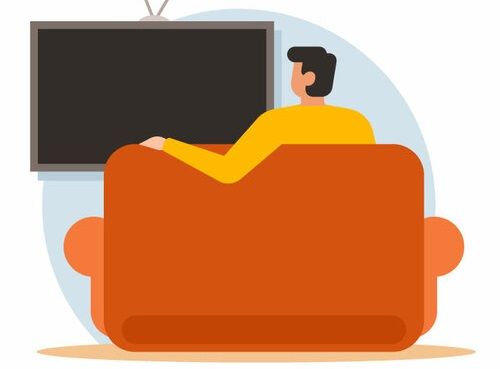 Over 40 percent of households sat in front of screens for over six hours every day during the lockdown (photo: publicdomainvectors.org)
October 1st, 2021 5:10 pm| by Ben Hamilton

The consumption of sweet items and soda drinks jumped by 40 percent during the first corona lockdown, according to a new DTU Food Institute study. The amount of screen time also soared.

The study compared its findings with those of DANSDA, which similarly monitored the Danes’ diets and physical activity before the lockdown.

Working at home not a problem, though
Data obtained from supermarket owner Coop confirms that sales of candy, chocolate, sodas, flour and sugar all soared in March and April 2020 compared to the same period the year before.

Nevertheless, there was nothing in the findings to suggest that people who work at home eat more unhealthily than those who travel to work.

In general, those at home are more likely to have stayed longer in education and have a high household income, and this balances the results out.

Almost a half managed six hours of screen time a day
The unhealthiest people in the survey ate 85 percent more sweets and snacks than the healthiest, and 60 percent fewer grains.

This is the equivalent of the unhealthiest eating 13 kilos more sweets and snacks every year than the healthiest.

Screen time is a problem across the board, though. More than 40 percent confessed to spending more than six hours of their free time in front of a screen during lockdown – up from one in ten in the DANSDA results.

Study: understanding how we are able to predict something is about to end
An Aarhus University study has been using music to understand how human beings are invariably able to predict something is about to end: such as a movie, dance or, indeed, a song. The study suggests humans store information about endings to the extent the brain is able to read the signs. Professor Niels Christian Hansen hopes his findings, which have been published in Psychological Science, will be used to optimise communication and interaction between people.

Danish tree species safe despite worldwide extinction threat
No Danish trees are in danger of extinction despite a new report that claims a third of the world’s 58,497 species are under threat. In total Denmark has 43 different tree species. Plant expert Johan Dahlgren, an associate professor at the University of Southern Denmark, was surprised by the magnitude of the threat, which according to the report has already accounted for 142 species of late. “If a single tree species disappears, there is a risk of losing the other species that live off or in that tree, and so it can start an avalanche, which can affect the entire ecosystem,” commented Dahlgren. Trees cover 31 percent of the earth’s surface. Three centuries ago, they covered about a half.

Researchers warn of the perils of taking paracetamol during pregnancy
Researchers at Rigshospitalet accounted for a team within an international expert group that reviewed 25 years of studies concerning the use of paracetamol during pregnancy, concluding that expectant women should be cautious about taking the painkillers. Excessive consumption could harm the unborn baby – for example, it could cause a malformation of the genitals or neurological diseases such as ADHD and autism – so paracetamol should only be taken after consultation with a doctor, they believe.

Astronomers determine that distant galaxies die because they run out of gas
Astronomers at the Niels Bohr Institute at the University of Copenhagen and DTU Space have observed how six distant galaxies mysteriously died at a time when they should have been at their peak. The galaxies in question may be 17 billion light years away, but astronomers have been able to study their demise, around 2-4 billion years after the Big Bang, in great detail, concluding that they simply ran out of gas. The findings could change our entire understanding of star formation and galaxy evolution.