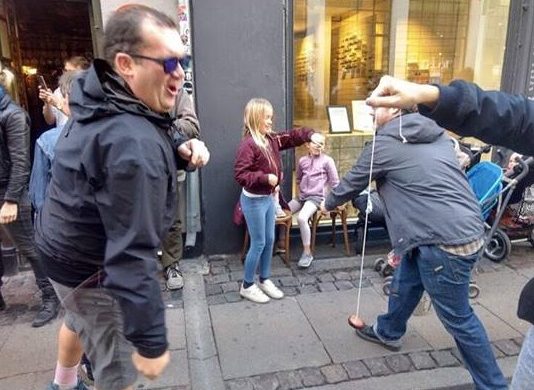 English Comedy Night
Oct 16, 17:00 & 20:00; 1420 Bar, Griffenfeldsgade 20, Cph K; 125kr, only online advance sales, email cph@internationalcomedians.com
CPH POST columnist Adrian Mackinder returns to host another night of English language comedy, this time headlined by Dave Thompson, a British comedian who is perhaps best known for playing Tinky Winky in The Teletubbies. Acclaimed as “mad comic brilliance” by none other than Ben Elton, he is one of Britain’s top stand-ups. He will be supported by Copenhagen-based comics Dennis Vansant (the co-owner of 1420) and Joe Eagan. (BH)

Christiania 50 år
ends Nov 14; Kunsthal Charlottenborg, Kongens Nytorv, Cph K; 90kr, kunsthalcharlottenborg.dk
Since Christiania was first proclaimed in 1971, it has been half a decade. That’s enough of a reason to celebrate its art and posters in the halls of this Charlottenborg art museum. (MB)

Concert: Sulka
Oct 1, 20:00; Studiestræde 52, Cph K; 150 kr, pumpehuset.dk
The 21-year-old rapper is at the top of the Danish rap scene. Her debut album ‘Epoker’ proved her technical writing skills. Sulka is directly reminiscent of classic rap, but manages to take the listener into a dizzyingly lyrical world that sometimes borders on poetry. The tone oscillates between softness and harshness. (MR)

Buster Film Festival
ends Oct 10; various venues; buster.dk
The festival offers a wide range of films to children, from toddlers to teens. From Ireland to India, from history to climate and from fiction to documentary, the event has no limits. Expect ames, rock for kids, dance and many other fun events. (MR)

Globe Quiz
Oct 7 & 21, 19:15; Globe Irish Pub, Nørregade 43-45, Cph K; 40 kroner per person
Game night’s on at this pub Nørregade! Gather your four best informed friends and secure a spot in the pub before they’re all gone. The winners will be awarded 1,000 kroner, and there are plenty of spot prizes too. (MB)

Verden er I dig
ends Jan 16; Kunsthal Charlottenborg, Kongens Nytorv 1, Cph K; 90kr, kunsthalcharlottenborg.dk
A ‘doctor’ from the city’s medical museum is making a house call. In his luggage he carries an exhibition featuring both historic and contemporary art. The visitors will get a glimpse into how our bodies are linked to the world around us. (MB)

Events at Gravens Rand
Gravens Rand, Søndre Fasanvej 24, Frederiksberg; open week days from 13:00; weekends from 12:00, closes at 02:00 Fri & Sat
After their opening on September 26, the Anglophone team at the pub Gravens Rand are busy planning the schedule for this October. Make sure to note October 12 as quiz night and October 30 as the Halloween Party. Each Sunday, there are acoustic sessions from 15:00. Look out for our feature in the next issue. (MB)

Nordatlantiske Filmdage
ends Oct 10; Nordatlantens Brygge, Strandgade 91, Cph K; 60kr, nordatlantens.dk
Alongside its Danish language movies, this north Atlantic film days event also has something up its sleeves for English-speakers. Visitors can experience Greenland, the Faroe Islands, and Island while in Copenhagen. How convenient! (MB)

Concert: Baest
Oct 9; 21:00; Studiestræde 52, Cph K; 170 kr, pumpehuset.dk
The death metal band formed in 2015 in Aarhus will perform their latest album ‘Necro Sapiens’. With two GAFFA Awards received earlier this year, Baest are one of Denmark’s most promising metal names. They are known for their furious, energetic sound. (MR)

Concert: Eivør
Oct 5, 21:00; Store Vega, Enghavevej 40, Cph V; 1,570 kroner, viagogo.com
The Faroe Islands’ answer to Björk will perform her latest album ‘Segl’, which was released in 2020, at Vega. A mix of jazz, folk, rock, and country performed by a soprano voice in English, Faroese, and most other Scandinavian languages, it is inspired by the singer’s native landscapes. The last time Eivør Pálsdóttir came to Denmark was last year in Aarhus. (MR)

Dairy-inspired menu
Oct 31, 15:30; Restaurant 56 Grader, Krudtløbsvej 8, Cph K; 575kr, restaurant56grader.dk
Installed in an old ammunition building from 1744, 56° will welcome you in Shakespeare’s language for a culinary encounter with dairy products. While head chef Jake Vousden will cook a menu of four different dishes, enjoy English-language presentations of the products – organic eggs, fresh cheese, milk, full fat yoghurt, dairy cow – which have all been produced from animals at the Søtoftes Jordbrug & Gårdmejeri farm in Ringsted. (MR)

Blabla language exchange
Oct 7, 19:30-22:00; various locations in Cph; online; free adm
“Exchange your language, meet new people, make friends, travel the world.” In the bars of the Danish capital, expatriates will be able to gather around what brings them together: their languages. In 2021, the community is active in more than 100 cities around the world. (MR)

Robin Hood
Oct 8-24; Glassalen, Tivoli, Vesterbrogade 3; 185-345 kr, billetter.eventryrteatret.dk
In the heart of Tivoli’s Glassalen, the children’s play Robin Hood is taking centre stage. Although it’s in Danish, young ones invariably speak both languages, so don’t deny them the pleasure of seeing this. After all, it can’t be worse that Lionel Bart’s ‘Twang!’ (MR)

Concert: RA The Rugged Man
Oct 1, 21:00; Sydområdet 4B, 1 sal, Cph; 220kr, loppen.dk
The American rapper from Long Island returns to Europe after releasing his last album in 2020, ‘All My Heroes Are Dead’. As one of the most intriguing figures in US rap, he has collaborated with the greatest: Mobb Deep, Biggie and the Wu-Tang Clan. He will be joined on stage by Milez, KCL and SkyggeSiden. (MR)

King of Dinosaurs
ongoing, ends Dec 31; Natural History Museum of Denmark, Oster Voldgade 5-7, Cph K; 50-105 kroner, snm.ku.dk
It’s probably everybody’s childhood dream to see a T-Rex. Four metres high, 12 metres long and 66 million years old, ‘Tristan Otto’ is one of the most complete T-Rex fossils in the world. In resplendent black, and almost all his teeth intact, there’s no disputing that this is the ‘King of Dinosaurs’ exhibited in all its skeletal glory.

The Visit
Oct 29-Nov 27, Mon-Fri 19:30, Sat 17:00; Krudttønden, Serridslevvej 2, Cph Ø; 175kr, teaterbilletter.dk
The team from That Theatre are taking us back to 1857 to the very home that Charles Dickens lived in. Director Barry McKenna and lead actor Peter Holst-Beck have penned an imagining of what it was like when HC Andersen came to visit and ended up staying for six weeks. First performed in the spring of 2020, but cut short by the pandemic, this is a chance to see a very special performance that CPH POST awarded six out of six stars to. That Theatre artistic director Ian Burns takes on the role of Dickens.