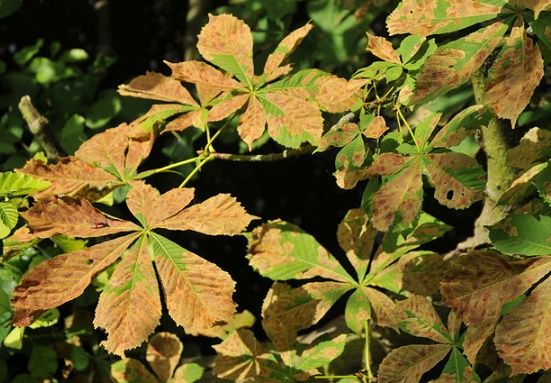 Horse chestnut trees are looking increasingly browned off these days – and it is all due to the activities of a pesky moth (photo: Philip Halling)
October 5th, 2021 1:55 pm| by Ben Hamilton

It has been a problem in the making for many years due to a siege of moths whose larvae are disastrous for horse chestnut trees.

Every autumn they shed their nuts to give children conkers to make little men out of, and inspiration to Nordic Noir writers, but now the order has come: 13 trees will be felled this month at the City Lakes, while others will be subjected to some serious pruning.

Recent windy conditions have demonstrated the trees are getting weaker with every passing year, and the time has come for action, rules City Hall’s Teknik- og Miljøforvaltningen.

Some 13 replacement trees will be duly planted.

READ MORE: Culture Round-Up: The notion that TV kills is an old chestnut for good reason

Pesky moths
News first broke of the condition affecting the trees in 2018. It is caused by a significant increase in horse chestnut leaf miner moths due to recent warm summers.

The moths lay their larvae on the trees, turning the leaves brown and dessicated.

The pests are almost impossible to eradicate, according to associate professor Hans Peter Ravn, an entomologist at the University of Copenhagen’s department of geosciences and natural resource management.

When the moths come in large waves, predators can only account for 10-20 percent of the numbers.

Shortage at capital’s 112 emergency number centre
A quarter of the staff at Hovedstadens Akutberedskab, the 112 emergency number centre for the capital, have stopped working over the last year, reports Berlingske. Some 144 out of 600 employees have left, meaning that emergency callers often have to wait in a queue. This summer alone, which experienced an increase in calls as the reopenings accelerated, 4,677 calls to 112 were answered with a delay of at least 23 seconds in the Capital Region.

Recognition for excellent upkeep of Naturpark Amager
The municipalities of Tårnby, Dragør and Copenhagen, along with Naturstyrelsen and By & Havn, jointly received the award for the City’s Best Experience on behalf of the partnership they have formed to realise the potential of Naturpark Amager. Chosen by the readers of AOK and Berlingske’s readers, the award recognises the special role the 3,500-hectare area plays in the lives of Copenhageners. Among the park partnership’s most recent initiatives is ‘The Armamino’, a 27 km hiking trail through the park.

Nurses now striking against staff shortages
Nurses at Amager Hospital today staged a one-hour strike to protest against their shortage of colleagues. Around 70-80 stopped work for an hour until 08:45 in the knowledge they would be docked an hour’s pay and fined 86 kroner each – the going rate for striking without due notification. The action follows many nursing strikes across the country – mostly to voice dissatisfaction at a proposed 5 percent pay rise over the next three years, which they contend is well short of what they deserve. At present, only 53 percent of all advertised nursing jobs are filled, according to DR, compared to 77 percent two years ago.

Amager artificial lake was illegally built and must be filled in – ruling
An artificial lake created in 2016 in Naturpark Amager next to Kalvebod Fælled will shortly be emptied and filled in, according to Danmarks Naturfredningsforening. The directive to fill the lake has been issued in accordance with a July 2020 ruling from Miljø- og Fødevareklagenævnet that the creation of the lake was illegal.  Eventually, it is hoped, the area will become beach meadow and the removal will make it possible to establish a path linking Kalvebod Fælled School to Kanonvej.

Treacherous crossing area on Østerbrogade to be addressed
Work will finally begin on establishing an island in the middle of Østerbrogade by Sionsgade to make it easier for pedestrians to cross the road – some seven years after funds were found to make it possible. During Week 42, the autumn half term holiday, slabs will be laid down between the cycle lanes and the road, and then in the middle of the road itself, which will be reduced from four to two lanes. Located around 250 metres away from the Jagtvej intersection, pedestrians can often be seen on the stretch of busy road struggling to cross it. The work should be completed by mid-December.

Princess gives a sod about new French school premises
On September 30, Princess Marie was at hand to shovel the first sod of earth at the 11,200 sqm site where a new Prince Henrik’s School will relocate in 2023 at a cost of 420 million kroner. Located on the corner of Rolighedsvej and Bülowsvej in Frederiksberg, the international school’s new home will be large enough to accommodate 800 students from kindergarten to high school age. Lycée Français Prins Henrik was founded as a French school in 1954, but today it caters to 30 different nationalities.

Mountains of earth growing day by day in Nordhavn
There is enough earth in place to build the planned expansion of the Copenhagen district of Nordhavn, but more continues to arrive by truck every day. To be specific: 12,000 tonnes per day brought by 350-375 trucks carrying up to 38 tonnes each. The earth, which is mostly sourced from construction sites in Copenhagen and Frederiksberg, is creating temporary mountains. The surplus will eventually end up being used to build the proposed island Lynetteholm, on which work could begin as early as next year. However, both Klimabevægelsen og Danmarks Naturfredningsforening have complained to the EU’s civil complaints committee about the potential environmental damage the island might cause to existing maritime life.