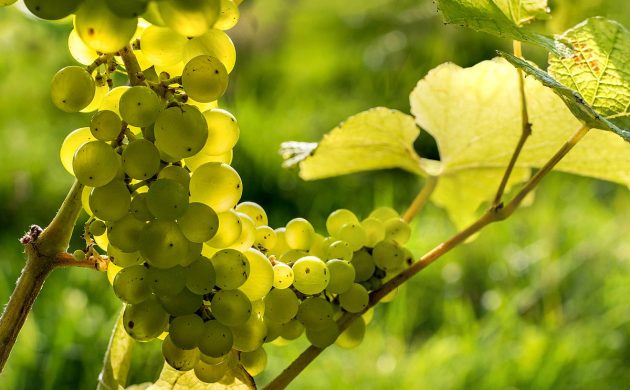 Solaris grapes: one of Denmark’s best-known varietals. But the Danish wine portfolio is about to get a lot more diverse (photo: W. Carter)
October 13th, 2021 5:15 pm| by Lena Hunter

We were warned: global weather abnormalities wrought by climate change are manifesting in the forms of extreme winds, flooding, forest fires and sea-temperature changes.

These upshots are vast, varied and often dangerous. In Denmark, a country shielded by its relatively high latitude, we are yet to truly experience the latter.

But Denmark’s less headline-grabbing weather changes are nonetheless having a big effect on agriculture.

Notably, warming climes have supercharged grape growth on Danish vineyards and dredged the native wine scene out of obscurity into the international limelight.

France, Italy, Spain … Denmark?
Denmark’s history as a wine-country is relatively short – commercial wine-production was only ratified by law as recently as 2000. Compare that with France, where the list of native grapes is almost as long as the centuries-old winemaking tradition itself.

However, in the past 20 years the number of commercial Danish wineries has increased from around 10 to 100, spanning over 90 hectares and producing 100,000+ litres of wine per year.

It’s nothing on Italy’s 4,250,000 litres – or even neighbouring Germany’s 746,200 –but Denmark’s harvest is already becoming markedly more bountiful as summer temperatures creep up.

Temperature + hours of sun = wine
The growing season for Danish grapes runs from April to September, and during this period the average temperature in Denmark has increased from 13.0 degrees between 1961 and 1990 to 13.8 degrees between 1991 and 2020.

That’s a national average – so some areas have experienced much sharper temperature increases that put them well within the usual range of well-known European wine areas. The same period has also seen about 15 percent more sunshine – a crucial factor in grape cultivation.

“There will be several coming years when it is very hot, which will be very beneficial for the grape harvest. Though there were fluctuations in the past, Denmark rarely achieved an objectively good grape harvest because the overall temperature was lower,” explained Jørgen E Olesen, a professor at the Department of Agroecology at Aarhus University, to TV2.

Case study: Vejrhøj Vingård
At Vejrhøj Vingård, where the vineyards occupy a coastal hillside overlooking Nekselø Bay in northern Zealand, the 2021 harvest started at the end of September.

Co-owner Niels Fink says it’s turning out to be a good vintage. “We look forward to a good harvest with a good yield, somewhat larger than last year. The maturity of the grapes is very satisfactory,” he told TV2.

According to Fink, the hilly location is ideal for the vines, with the slope exposing the grapes to more sun and less frost than flat fields.

Additionally, the majority of the Vejrhøj wines are white wines, made from grapes suited to the northern climate, which have a natural resistance to mildew.

“This means that we do not have to spray with anything, and that we can keep production 100 percent organic,” says Fink, whose bottles have even made it onto the wine list of Geranium – recently ranked as the world’s second best restaurant after Noma.

What can we expect?
Right now, the lion’s share of Danish wineries are growing hardy, native white grape varieties like Solaris. Danish red wines are generally regarded as ‘thin’ and unsuccessful – though some recent homegrown rosés are bucking the trend.

However, as temperatures rise, the narrow Riesling Belt – encompassing Trier in western Germany and Alsace in northeastern France – will move further north, and it’s likely that in a couple of decades Reisling will comfortably grow on Danish soil.

In about 18 years, Denmark may have the same average temperature as the Mosel area had 30 years ago.

In a few decades, Fink predicts that Danish red wines might start making an appearance on Michelin-star menus.