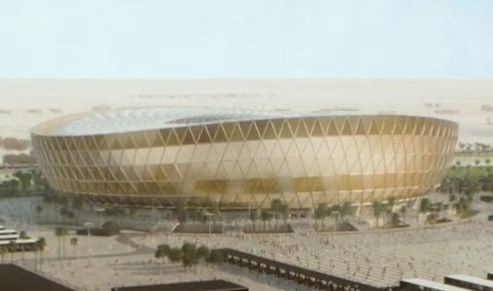 The proposed venue of the 2022 World Cup Final, unless Enhedslisten gets its way (photo: AFL Architects on Vimeo.com)
October 14th, 2021 10:57 am| by Ben Hamilton

Amid the deliriously happy fans at Parken on Tuesday night following Denmark’s qualification for the 2022 World Cup in Qatar, which starts in 13 months’ time, was a more solemn figure: a fan holding a Dannebrog aloft bearing the words “Boycott Qatar 2022”.

DR spoke to Daniel Niebuhr, the man with the Danish flag, because he was asked by security guards to take it down at Parken, the national stadium of a country that takes pride in being a bastion of free speech.

One rule for the Mohammed Cartoons?
The orders apparently came from the DBU footballing body, and Niebuhr initially refused to comply.

“We did not take it down because we could not understand what rules we had broken. But then another security guard came,” he explained.

“It’s not because the situation became confrontational, but we were told that if we did not unpack the flag, we would have to leave the stadium.”

Enforcing the rules of UEFA and FIFA
It was later explained to Niebuhr that he had violated the rules of UEFA – the same legislation enforced during Euro 2020 when Munich’s Allianz Arena was lit up in rainbow flags, and also during the quarters in Baku when a Danish flag waved a rainbow flag – and also FIFA’s

“FIFA’s rules are that you must not have political messages on banners and flags for the matches. It was judged to be a political message,” explained DBU spokesperson Jakob Høyer, according to DR.

However, approval was granted for Amnesty International to raise a temporary yellow banner during the game with the world “Human rights for migrant workers”.

It also turns out that Niebuhr hoisted his flag at the game in Moldova last weekend and that it was confiscated by security officers and handed back to him after the game.

Most political parties against boycott
A day after qualification, Ane Halsboe-Jørgense, the culture minister, took part in a consultation in which she was asked whether it was time Denmark had a national strategy regarding contentious hosts of sports events.

Halsboe-Jørgense answered that such a matter was for the sporting bodies, maintaining that Denmark would absolutely not be boycotting the World Cup in Qatar.

A quick survey conducted by DR of the political parties revealed that Enhedslisten is the only one in favour of a boycott, but only together with others to force FIFA’s arm into finding an alternative host. SF, meanwhile, would not rule it out, so advocates more consultation with the other parties.

All the other parties support Denmark going, but only Venstre and Dansk Folkeparti were adamant that official representatives should attend.

Frie Grønne called out for a better international strategy, as contentious hosts are a recurring problem.