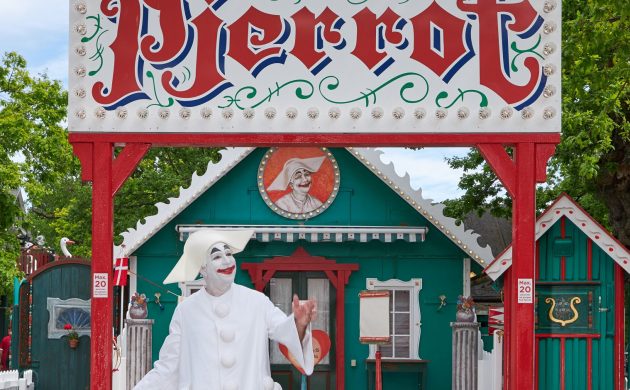 Did you know that the Dyrehavsbakken theme park, which is more commonly referred to as Bakken, opened in 1583, making it the world’s oldest themepark?

This means it could quite legitimately have been mentioned in a Shakespeare play (but not Hamlet, as that’s set in around 1400), or had its opening day painted by a young Rubens.

Clown after our hearts
Its clown Pierrot is similarly ancient. He was born in 1800 and for over 200 summers he has been delighting the children of Denmark with his antics: these days between 15:00 and 16:00 in front of his little greenhouse.

Bakken is something of a gardener, and he’s just got the harvest in, so expect copious bales of straw for him to fall over to universal hilarity.

“Pierrot, Pierrot come out now,” the children shout, and a few adults too, and his storytelling never fails to disappoint them.

“I feel like a part of Bakken’s heart,” Pierrot says.

Rides don’t get more rickety
If that’s true, let’s hope Onkel Reje doesn’t cut it out because he’s a pirate. Aimed at slightly older kids, his shows are pretty riotous.

Pierrot hasn’t got a monopoly on the straw either, as Friluftsscene is a huge maze built out of the stuff. Families are challenged to negotiate their way out of it in the quickest time possible. The tip is to remind them of the 200 kroner two-course meal on offer at selected restaurants.

Almost as old as the clown are some of Bakken’s rides, such as its famous wooden rollercoaster ‘Rutschebanen’. You might suspect the rickety ride dates back to the 1580s, but it was in fact opened in 1932.

Until very recently, brakemen used to ride the coasters, responsible for reducing its speed around corners. But while that thrill has been discontinued, lots of new rides have been added over the last 20 years to bring Bakken kicking and screaming into yet another century.