As a medieval historian, I would love to watch films true to historical reality. But strictly historically accurate films set before 1500 would require a lot more scenes involving ploughing than Hollywood is currently willing to indulge.

So what I won’t be doing here is cataloguing  the inaccuracies in the recent Margrete flick. Rather, I want to mention some of the exciting historical details left out.

A dollop of Dumas
In the year 1402, Margrete stands as regent of Denmark, Norway, and Sweden. She has no direct heir, since her only son, Óláfr Hákonarson (henceforth Olaf), died in 1387 aged 16. Therefore Margrete has appointed her sister’s grandson as her successor: Eric of Pomerania. Suddenly a man appears claiming that King Olaf in fact never died. Indeed, the man proclaims he is Olaf in the flesh.

So far, the film and the historical sources agree. But they quickly diverge. In the film, the pretender is the real Olaf. The nefarious Bishop Peder Lodehat faked Olaf’s death, it transpires, and the king was imprisoned in a monastery in Prussia. Like ‘The Man in the Iron Mask’, he was held in terrible conditions for 15 years, before being released by a Swedish nobleman intent on destroying Margrete’s realm from within.

Enter a Prussian peasant
In reality, the False Olaf, as he became known, was not Margrete’s long lost son. A north German chronicler, Johann von Posilge, wrote in around 1420 that “he was found to be incorrect in all things, as he was not born in the country, and he also could not speak the language”.

Von Posilge did not have much love for Denmark, so one might expect him to paint the pretender in the best possible light. False Olaf, he wrote, was a “Prussian peasant” who had been living “in a village near Grudziądz” (today in Poland, then in the State of the Teutonic Order) when some traders noticed he resembled the dead king.

A mysterious merchant, Tyme von der Nelow (or Velow), escorted the False Olaf to Gdańsk, where he was set up with a court. He received a royal seal, herald and scribe, and kingly correspondence was issued in his name.

Margrete could not tolerate this, but while the imposter remained in Gdańsk, he was beyond her grasp. The Order arranged for the impostor to be delivered into her hands – probably as part of negotiations over control of the island of Visby.

Rooting out the mole
There are fun folkloric stories about how Margrete supposedly deduced that the pretender was not her son. The Danish Chronicle by Christiern Pedersen, written in the 1520s, records how Margrete examined the man for “a little mole between your shoulder blades which you were born with”. No mole = no claim to the throne. The same story is repeated by Arild Huitfeldt in 1595.

Simon Grunau, one of the most impressive bullshit merchants of the early 1500s, tells a tale of how Margrete invited the impostor to share a room with her while he slept. When the impostor nodded off, Margrete grabbed him by the neck, lifted up his shirt, and gave his belly button a good grope, because “the true king had a navel that protruded like a hen’s egg”. The False Olaf had an innie and was duly executed.

Wet behind the ears
To most people it must have been obvious from the start that False Olaf was a scam. The north German humanist Albert Krantz, writing in 1545, reveals that False Olaf was able to give some authentic details about the workings of the Danish court during his questioning.

Krantz offers the story that the impostor was coached by the real Olaf’s wet-nurse (Huitfeldt slurps this up). This, by the way, is half of the explanation of the non-sequitur appearance of an Icelandic wet nurse called ‘Hildur’ in the film … the other half must be the Icelandic co-producers.

But our man Posilge, writing much nearer the time, depicts a wholly uncoached Olaf. Moreover, he seems to have quickly admitted that he wasn’t the king during questioning. Posilge appears to have had access to a confession (such documents were commonly issued in cases of imposture).

The False Olaf tells us the names of his parents (Wolf and, ironically, Margrete) and that he was an immigrant to Prussia. He was born on the banks of the river Ohře, making him a Saxon or a German-speaking Bohemian by birth.

Fire solves anything
I find the historical reality more arresting than the Man in the Iron Mask motif used in the film: a poor Prussian peasant is plucked out of obscurity and trapped in a plot beyond his understanding. We will never know who exactly orchestrated the imposture, although disaffected merchants from Stralsund and Gdańsk, upset that their fellow cities in the Hanseatic League had made peace with Margrete, are likely suspects.

At the climax of the film, Olaf is burnt at the stake. We see some scrolls tossed onto the fire, while subtitles tell us that “all of the legal documents associated with the case were burnt”.

But this is a severe misunderstanding of the primary sources, which conceals the horrible drama of what really happened. It was not legal documents that were burnt with the False Olaf. Indeed, Posilge seems to have had access to a confession some 18 years later. Instead, what was burnt were the letters that the False Olaf had issued while he was ‘king’ – now fashioned into a mocking crown upon his head, and also threaded together like a necklace, draped around his neck.

Medieval violence could have a spectacular genius for symbolically laden cruelty. Legal thinking at the time stipulated that forged items were to be burnt. His letters were forgeries, yes, and perhaps the man himself was to be considered a forgery of a type.

Caught in a power play
The film ends with Olaf screaming, then falling silent as he expires (presumably, in the interests of good taste, the film does not include the pyre being primed with pitch, sulphur and urine, as the Chronicle of North-Elbian Saxony from the 1480s has it).

But the story did not end there. Our North-Elbian chronicle records that once the embers cooled, “many Danes collected his bones, whatever [of them] they could obtain, and considered them to be great relics”. Some who watched the False Olaf burn didn’t care that he spoke no Danish, nor knew anything about Denmark.

Of course, we can never truly know what was going through the minds of the False Olaf’s supporters as they picked through the ashes. But I wonder if some explanation might be found in the thrill of believing something that the authorities do not want you to believe – not an untimely thing to ponder in an age of florid conspiracy theories.

Some become victims, like False Olaf, and some become spectators. They seize upon what they see with political desires that are hard to understand, but which have a tendency to escape the control of the powerful. 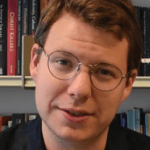 Richard Cole is an Assistant Professor of Medieval History at Aarhus Universitet. His recent studies on the False Olaf will be published in Viking and Medieval Scandinavia (2022) and Scandinavian Studies (2023). His book, The Death of Tidericus the Organist. Plague and Conspiracy Theory in Hanseatic Visby was published by The Viking Society for Northern Research in January 2021 (£10.00)