Cans of beer flew upwards like little rockets as ‘Sweet Caroline’ echoed out across the expanse. It could have been a scene from a Neil Diamond concert at some grand music festival somewhere – in reality the surroundings were considerably more modest.

They had just witnessed their flagship team win the top DAI Mesterrækken division for the first time in the club’s history, and the worn-out pitch tucked away in a corner of Ryparken wasn’t about to put a damper on celebrations.

In fact, the fun had commenced already in the first half, when it quickly became apparent that the hoops were going to dominate the opposition. Goals came quickly and often, with the foe rarely threatening.

Ending the curse
It all ended in an emphatic 7-0 trouncing, which finally put the club’s Mesterrækken curse to bed, almost 40 years after the club was founded back in 1982 by Irish and Scottish expats.

A lot of water has run under the bridge since then, including quite a few moments when past Celtic teams got tantalisingly close to winning the title, only for glory to slip away at the final hurdle. Well not this time!

“To do it in this fashion is an absolute pleasure. We’ve been grinding it out, I think it was five years ago since I joined the club, and we’ve had many years of hurt when we’ve been on the other side of a game like this,” said Nils Bittmann-Myers, the captain of the team.

One person who has no doubt witnessed more club moments of woe than most is icon and co-founder Aiden Coogan.

What made the day even sweeter for him was that his son Sean was out there on the pitch helping to bring home the trophy that eluded his dad for so many years.

“This is history being made and it’s great to see so many old faces down today. We could never play to a standard like this in my day. We were a pub team. It’s just fantastic to see these lads. We’ve so many teams now and it’s great the way the club has evolved,” said Coogan.

“The club has gotten much more serious now. Back then we never trained or anything, we were just happy-go-lucky.”

A cultural cauldron
Coogan hailed the direction the club has taken, underscoring the changed dynamics of Copenhagen Celtic today.

From Aarhus and Buenos Aires to Cork and Dundee, the club reflects Copenhagen in many ways and has transformed into a cultural melting pot.

Chris Myers, another club stalwart with 20 years at the club (including five as manager) under his belt, echoed the sentiment.

“The club’s got stronger, bigger and has history now. It’s much more connected, thanks in part to social media,” said Myers.

“Everybody knows everybody. It’s a bonding family type club for internationals over here. I’ve watched these guys a few times now and it’s probably the best 11s side we’ve had in history, which is impressive considering the good teams we’ve had in the past.”

Myers plays for the Supervet’s 7-a-side team, one of ten squads spilling across numerous age groups and skill levels.

That was reflected by the crowd that braved the weather conditions to come down and watch the game.

All age groups were represented. There was even an infant watching his dad keep the clean sheet in goal.

The club is constantly working to evolve and one of its next projects is seeing if they can start up a women’s team (so ladies, get in touch if you’re want to get involved).

A blossoming community
Over the years, the club has helped many internationals to settle in Copenhagen, and Ray Leighton, another long-serving club servant, contends that much has changed in the past decades.

“It brings a tear to my eye. Today we’ve taken the club to a different level. We play football at a better level now than we’ve ever done. It’s probably the best team we’ve ever had,” said Leighton.

“In the old days it used to be about the ‘kammeratskab’ and now it’s all called integration. We’re all integrated and we’re all functioning socially as Danes, if you want to call it that. It was a lot harder in the old days. Social networks are totally different and the way you look after yourself has totally changed as well. People want a better quality of life and we’ve got that in Denmark.”

Back in Ryparken, the beer cans had finally settled and the champs headed off to Sean’s place, before going into town for dinner, drinks and some well-earned shenanigans

Coogan watched them depart with a grin widening on his face.

“The difference between now and back then is that we would have been doing this before the game,” he bellowed with a laugh. 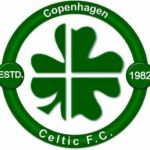 – Founded in 1982, it is the biggest international football club in Denmark with over 100 paid-up members

– Find out more at copenhagenceltic.com or sign up for training via Facebook on the Training Copenhagen Celtic page