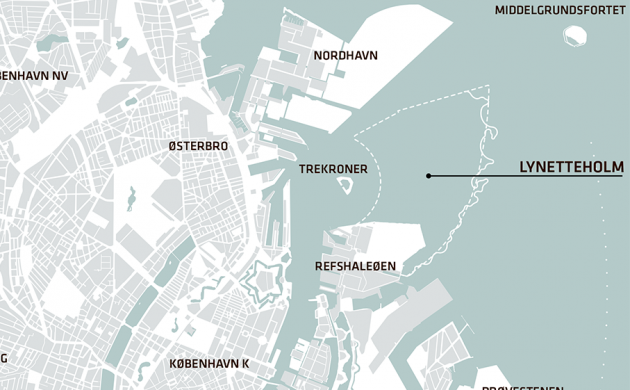 The Klimabevægelsen climate organisation is suing the Danish government over its plans to start the construction of the Lynetteholmen man-made island in Copenhagen next year without carrying out an adequate assessment of the effect it will have on the environment.

There is a good chance the legal action will delay the start of the work, which was due to start next year and continue until 2070.

“We can’t just sit on our thumbs”!
“We cannot sit here in 2021 and listen to politicians talk about how they want everything green for the sake of our children, and then let them launch the largest construction project in Danish history without even investigating how it will affect the climate and the environment,” Klimabevægelsen spokesperson Frederik Roland Sandby told Politken.

“It simply does not work.”

Think-tank suggests master’s students should pay their own way
The Arbejderbevægelsens Erhvervsråd think-tank has suggested students studying for a master’s should not receive SU support from the government, reports Børsen. Instead they should be offered interest-free loans. The money saved can be spent on improving education, it reasoned.

Corona rate continues to climb
The corona infection rate continues to climb. On Friday afternoon, 1,270 cases were declared for the previous 24 hours – up from 1,247 on Thursday and 1,127 on Wednesday. Some 144 people are in hospital, of which 16 are in intensive care – a net increase of 24 admissions over the last three days. There were no deaths, but six died over the two days prior.

Criminals targeting elderly with bank card fraud scheme
East Jutland Police is investigating two cases of bank card fraud against the elderly in the same town. In the first, a man described as foreign obtained a 84-year-old woman’s Dankort and code by deception at her home in Risskov. An hour later, an 88-year-old woman handed over her card and code to a ‘bank employee’ who visited her home 30 minutes after a call arranging the transaction. Both women have had thousands of kroner stolen.

Good response from farmers to state’s invitation to plant forests
The nation’s farmers have submitted 381 applications to have their fields converted into forest. In return they will receive a subsidy and be helping the government’s goal of converting more arable land into areas of nature. Should most of the applications be approved, the country will gain around 2,000 hectares of new forest. The subsidies are derived from a EU pool of 70 million kroner. Farmers can get up to 28,000 kroner per hectare.

Employment rate increased again in August
In August, the employment rate made another net gain: this time of 15,000 jobs. It marked the seventh monthly increase in a row, and today there are an all-time record number of 2.869 million people in work, according to Danmarks Statistik.

Only half getting through to Denmark’s answer to the Samaritans
Of the 165,732 calls received last year by the Livslinien, the Danish equivalent of the Samaritans, which counsels people who might be considering harming themselves, only 14,328 were answered. According to Livslinien, this corresponds to half the callers not being answered, as many would have simply rung back again. Livslinien blames a shortage of professionally trained personnel.

Two more banks follow Nordea’s link and increase negative interest rate
Dankse Bank and Jyske Bank have followed Nordea’s lead and raised the negative interest rate on holdings of over 100,000 kroner. From Monday, it will be adjusted from -0.6 to -0.7 percent. For those holding an account that is not their NemKonto, their preferred channel of receiving salary and benefits, the first 100,000 kroner is also subject to the interest.

Captain of ship that ran aground charged with being drunk
The captain of a Dutch cargo ship, the Beaumaiden, which ran aground near Bornholm on Monday evening, has been charged with commanding a ship whilst intoxicated. Bound for Tallinn on its journey from Antwerp to deliver a consignment of manure, it hit trouble off Sorthat-Muleby but was then set free. Subsequently it docked at Rønne for an assessment of the damage, where it was ruled that none of its load had polluted the waters. The captain’s blood alcohol level was 0.8.

Prison time for pair who defrauded hospital of 2 million kroner
Two men have been convicted of defrauding Lillebælt Hospital in southeast Jutland of 2 million kroner between 2015 and 2019 in relation to their provision of supplies. Both received 21 months in prison–- a sentence reduced to three months should they be willing to perform community service of 250 hours. A third man, who worked for the hospital, received a similar sentence in May.