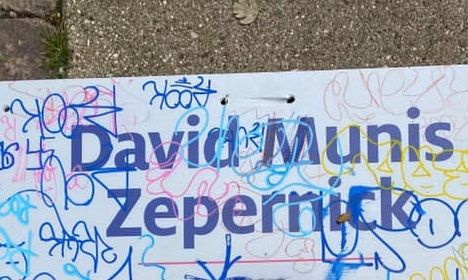 The 83rd anniversary of Kristallnacht (the Night of Broken Glass), a pogrom against Jews carried out by the Nazis on 9–10 November 1938, is approaching: a cue for anti-Semites all over the country to carry out vile vandalism.

Just two years ago they desecrated 80 headstones in Randers – just one of many cities targeted in the region. Vallensbæk, Silkeborg, Aarhus, Aalborg, Copenhagen and the Swedish duo of Gothenburg and Stockholm all sustained anti-Semitic slurs.

This year, they’ve come early. Over the weekend (from midday Saturday precisely), tens of thousands of posters were fastened to all manner of lamp-post, pylon and bridge in anticipation of the regional and local elections on November 16.

It was an open invitation to the creatures of the night, and they have quickly obliged.

Not the first time
David Zepernick is a Radikale councillor in Frederiksberg. His mother is half-African, and that has led to some rather daft assumptions over the years.

Tagged a “Niggerlover” two years ago, more often it is assumed that Zepernick is Jewish. In fact, 20 years ago, the politician discovered he was on a hard-right list of influential Jewish Danes along with names such as journalists Adam Holm and Martin Krasnik, as well as the politician Finn Rudaizky.

The evidence this morning is that the creatures have really gone to work, as his placard is daubed in all manner of graffiti.

A swastika is visible among the unwelcome additions. 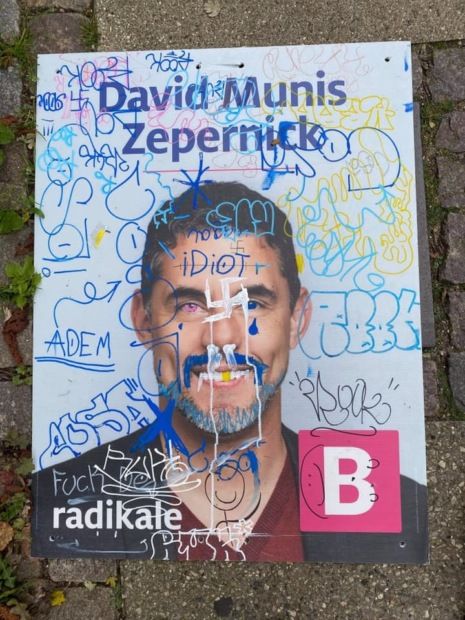 Surely a thing of the past!
“This is Denmark 2021! I must admit that I honestly thought Nazi-symbols were a thing of the past. I am quite surprised to see the ugly face of anti-Semitism and my name resurface,” Zepernick told CPH POST.

“Not least because I am not Jewish. But I guess my name ‘Zepernick’ and my relatively dark skin/ appearance could lead some people to believe otherwise.”

For Zepernick, the focus ahead is his campaign.

“I will not lose a single night’s sleep,” he continued.

“Actually I am now even more committed to fighting for our liberal democracy, liberty and freedom of speech and against any attempts to oppress or intimidate minorities – Jewish or others!

DF candidates too
Ironically, the swastikas fly both ways, as several Dansk Folkeparti placards have already received their fair share.

TV2 reports today that DF candidate Christian Bülow, who is also running for election in Frederiksberg, has also been subjected to Nazi-related graffiti, including swastikas, SS signs and Hitler-like moustaches.

Bülow, who has reported the matter to the police, has already had to replace eight of his posters due to the vandalism.

“These are people who obviously do not know me or my politics. Because I’m neither racist nor Nazi,” he told TV2.

“It’s insanely annoying and I’m actually getting really upset. It is perfectly fine that you disagree about things, but I can not understand the motive behind it.”

While DF is more often referred to as a right wing party, part of its ideology, like that of the German Nazi Party, is rooted in left-wing socialism.