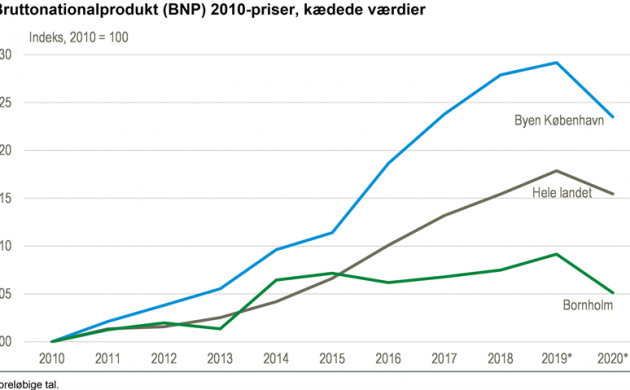 The Danish economy may have endured the COVID-19 pandemic better than that of most countries, but it didn’t get off scot free.

According to new figures from Danmarks Statistik, Denmark saw an overall 2.1 percent drop in GDP (Gross Domestic Product) for 2020 – with Copenhagen leading the way with a comprehensive 4.4 percent dip.

The decline occurred nationwide as every region of the country saw a fall in GDP.

Disposable income stable
The numbers showed that it was particularly driven by a potent downturn in economic activity within the realms of trade, transport, culture and leisure.

The good news was that household disposable income was not as adversely affected by the pandemic due to state support initiatives that financially aided various sectors and helped maintain employment stability.

Nationwide, the average household disposable income per citizen increased by 0.1 percent last year as a result – though the biggest drop was 1.3 percent in north Zealand.

Wage income increased in every region of the country, aside from Bornholm, where it fell by 0.7 percent.