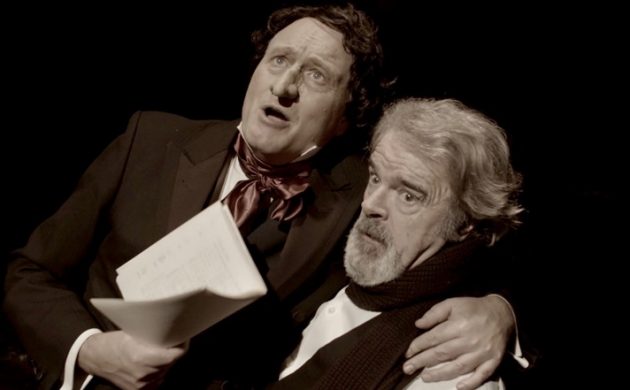 That Theatre Company’s celebrated ‘The Visit’ is back for another run at Krudttønden this November. Frolicsome, creative and loaded with history, this one’s worth a visit.

Written by and starring Barry McKenna and Peter Holst-Beck – who wrote and directed the ever-successful ‘Hamlet Live’ at Kronborg Castle – and co-starring That Theatre founder Ian Burns, ‘The Visit’ recounts the real events of HC Andersen’s overlong five-week stay at Charles Dickens’ family home in Kent in the summer of 1857.

On paper, the pair had the markings of a great friendship. Dickens was the pearl of 19th century British social commentary, while Anderson’s nine volumes of 156 fairy-tales have become touchstones of the collective literary consciousness in the West.

McKenna, Holst-Beck and Burns bring to life the authors’ tumultuous – and now notorious – comradeship in an arcing historical comedy that muses on the creative process of writing.

Familiarity breeds contempt
Burns and Holst-Beck’s chemistry on stage is nothing short of charming. The two go toe-to-toe, chatting, jesting, sparring and all-out clashing as equals in exchanges littered with humorous misunderstandings.

Holst-Beck’s Anderson toes a line between antagonising and pitiable, whilst Burns’ Dickens oscillates between short-fused and relatable.

McKenna – Dickens’ grouchy, whisky-swigging housewife – punctuates the battle with witty jibes. As the three navigate successive episodes of social-clanging microaggression, the roving finger of blame for the bad atmosphere never rests on one for too long.

Writers’ tears
It’s the swell and break of small tensions that prevents the prickly awkwardness from boiling over and, all said, an undercurrent of genuine regard between the two men is what comes out in the wash.

Near the end of his stay, Andersen breaks down in tears when he reads a literary review of his philosophical work ‘To Be or Not to Be’, in which it’s trashed as “confusing, meaningless and vulgar”.

It’s a touching moment, in which Dickens – by now offering nothing short of a cold front – drops his grudge and comforts Anderson with some well-chosen words of experience.

Literary boffs delight
Naturally, there are a wealth of Easter egg references to Dickens and Anderson’s collective oeuvre.

“Toodle pip! Wait … Pip … what an excellent name!” exclaims Dickens, from his writer’s desk. Later, Andersen wonders romantically whether a little girl selling matches might be wandering the streets of London.

Likewise, there is talk of Dickens’ newly-published ‘Little Dorrit’ flopping, and hints of Andersen’s ‘The Ugly Duckling’ peppered into the conversation on a country walk.

Split into ten ‘chapters’, the structure of the play also leans into the literary theme. At the outset, Burns introduces a large prop manuscript bearing the chapter names, the pages of which are turned throughout.

It’s one of a few visual gimmicks and creative props that succeeds in adding playfulness to the whole production without becoming kitsch.

A milestone production
When Anderson finally left, Dickens wrote on the mirror in the guest room “Hans Andersen slept in this room for five weeks – which seemed to the family ages!”, and his daughter Kate described him cruelly as “a bony bore”.

That said, the lasting impression of That Theatre’s visit is one of compassion, writerly influence and professional respect.

This is That Theatre Company’s 50th production – a fitting landmark for a performance that muses on the importance of artists supporting artists.

ends Nov 27, Mon-Fri 19:30, Sat 17:00; Krudttønden, Serridslevvej 2, Cph Ø; 175kr, teaterbilletter.dk
The team from That Theatre are taking us back to 1857 to the very home that Charles Dickens lived in. Director Barry McKenna and lead actor Peter Holst-Beck have penned an imagining of what it was like when HC Andersen came to visit and ended up staying for six weeks. First performed in the spring of 2020, but cut short by the pandemic, this is a chance to see a very special performance that CPH POST awarded six out of six stars to. That Theatre artistic director Ian Burns takes on the role of Dickens.