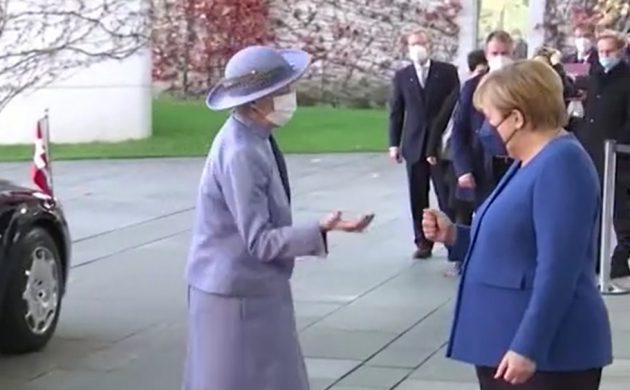 Given that Germany’s population is 13 times that of Denmark, its daily corona infection rate of 50,000 is not substantially larger than the 2,132 case confirmed by Statens Serum Institut this afternoon, but it is taking significantly more action.

And tomorrow that will impact Queen Margrethe II, currently part of a trade delegation visiting the country, as tomorrow’s state banquet with the Bavarian prime minister has been cancelled at short notice due to the rising cases.

Huge interest in Denmark
In Denmark the media have been taking a big interest in the attendance of the queen and her heir, Crown Prince Frederick, on the trip to Germany.

After all, worth 144 billion kroner a year, Germany is Denmark’s biggest export market.

“The Queen and the Crown Prince must open doors for Danish business in the midst of a German political power vacuum,” blazed the DR headline yesterday.

“It is of great importance that the Queen and the Crown Prince open doors down here,” Dansk Erhverv chief executive Brian Mikkelsen, a former minister, concurred to DR.

“Their ability to open doors at the very highest level is unique. The Danish companies that are down here get access to the German top brass. It really is the A level.”

Perfect match to help Germany digitalise and go more green
Germany is still waiting for a new chancellor to replace Angela Merkel some 45 days after the September 26 elections!

The man most likely to become chancellor is Olaf Scholz, a social democrat who needs the help of the Green Party and the FDP ´liberals. Pundits expect him to formally succeed Merkel next month.

Once Scholz’s coalition takes power, it is expected to announce a comprehensive digitalisation of the public sector and a faster green transition to make Germany climate-neutral – two areas that Denmark excels in.

“No-one is better than us when it comes to digitising the public sector,” Mikkelsen told DR.

“So it means a great deal if the new government is going to invest massively in that area. Danish companies will really be able to bid with many solutions.”

Faux pas at greeting
However, while the Danish media is enthralled, the likes of the Daily Mail and CNN have been getting their kicks from another aspect of the tour: an embarrassing greeting between the queen and Merkel.

When Merkel went to fist-bump Her Majesty, the sovereign raised her hand to her chest apologetically, leaving Merkel clutching at air.

Merkel then returned the gesture, before taking the monarch on a walk through the Brandenburg Gate – a favoured choice for state visits.