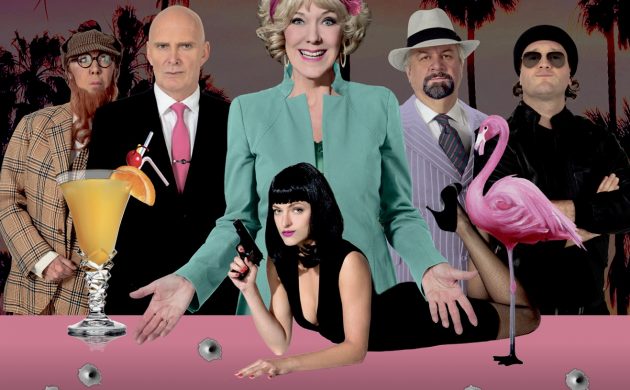 Did Vivienne McKee really retire? Well, yes, she tried in 2017, but her audiences didn’t let her.

“One more year, one more year,” they bellowed at the end of every performance of her Crazy Christmas Cabaret (CCC) show following her announcement until she gave in.

But yes, the reason why we haven’t heard much about Vivienne, and most thespians to be fair, is corona. CCC was completely cancelled last year, so the premiere at Glassalen theatre in Tivoli on November 16 will be the first show for nearly two years.

And given how corona has made time drag on much slower than normal, it’s been a long, long wait for the estimated 60,000 who return year after year.

That’s the CCC way!
A few years ago, we wrote up a history of the CCC, which began accordingly:
“If you want to know how to get Copenhagen, you must be prepared to go all the way – to not give up the fight until one of you is dead! So here’s how you get Copenhagen: he pulls the Dane, you pull the Dame. He makes one of yours cry with laughter, you make one of his die of laughter! That’s the CCC way!”

Yeah, someone alert David Mamet’s lawyers, as we ripped off his script for ‘The Untouchables’. But maybe our lawyers should dust off the cobwebs on their filofax (they really are that old) and give the CCC a ring.

Because they’ve only decided to give this year’s show a mafia theme. Granted, it’s more Al Pacino Scarface than the Al ‘Scarface’ Capone taken down by Eliot Ness in ‘The Untouchables’, but as looneys in US courts often remark: “It’s an uncanny coincidence”.

We needed warming up
Yes, just like Oliver Stone’s classic film ‘Scarface’, the CCC play ‘Tell Me About It’ is set in Miami.

McKee felt that after all the rotten luck we’ve had, we could do with a bit of cheering up and Florida sunshine.

“I knew I wanted to whisk audiences away from cold Denmark, and the fear of further Covid restrictions, and transport all of us to a warm, nostalgic world of sunshine and snap-happy music,” she explained in her latest Copenhagen Post column.

“So where and when should I set this year’s show to help us escape from today’s miserable pandemic and politics? I flipped open a travel magazine and saw a sandy beach and a soaring luxury hotel. Of course, where better than Miami  – much loved by sun-seekers, celebrities, criminals and Trump supporters?”

Vivienne’s fav decade
The era is also important, and just like the Stone film, this year’s CCC will be set in the 1980s.

“In my mind, the Eighties was a time of both innocence and excess. A decade of big hair, big shoulders, lycra, leggings, gadgets and gameboys. A time when young people still talked to each other, instead of burying their heads in their mobile phones or sitting at home hunched over their computers,” continues McKee.

“We had TV shows with family values like ‘The Cosby Show’ and ‘Soap’, soaps like ‘Dallas’ and ‘Dynasty’, movies like ‘Ghostbusters’ and ‘Dirty Dancing’ and action-packed series like ‘Miami Vice’ – iconic in every way, from its groundbreaking fashion to terrific music. And what about the pop stars in their prime: Michael Jackson, Madonna, Tina Turner and Prince?”

Nobody does it better
Nobody makes a better case than James Bond himself, she argues. While “Daniel Craig scowls his way through them with no funny lines or implausible gadgets”, Roger Moore “grinned and quipped through comedy capers with gadgets (and pussy) galore!”

As the tagline promises: “This is “No Time to Die’ – but time to die laughing!”
40-year jubilee show

This is McKee’s 40-year jubilee show, so expect something extra special – especially as the world can move on now Trump is gone and Brexit done and dusted.

The story of Don Calzone and his children Dino, Dolce Vita, Al Fresco and Cappuccino is exactly the pick-me-up we all need.

Running until January 15 this year to ensure nobody misses out, it’s still best advised you reserve your tickets as soon as possible, as an awful lot held onto the tickets they bought for last year’s show.