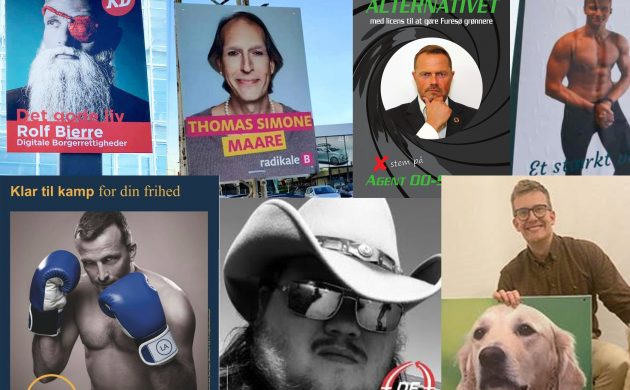 According to a 2021 study in political science journal Acta Politica entitled ‘Do campaign posters trigger voting based on looks?’, a “plethora of studies now suggests that candidates who look more attractive, competent, or otherwise appealing win more votes”.

That may be old news, but authors Michael Herrmann and Susumu Shikano found correlations in German election data that suggested that inundating voters with candidate posters, as in elections in Germany and Denmark, increased the incidence of “voting based on looks”.

So policies and promises aside, candidates hoping to win votes in the regionals would do well to leverage our basic instincts and look sharp on their campaign posters.

Cream of the crop
But how exactly do you do that? Sure, you can put on a shirt and tie and get a professional photographer, but isn’t everyone doing the same?

This isn’t just about a short back and sides – this is about standing head and shoulders above the competition. You want to be the Coca-Cola, Nike or Apple of personal branding … and that means taking risks.

That’s what these 12 candidates, who have all gone above and beyond to grab their constituents’ attention, will probably tell you, anyway. 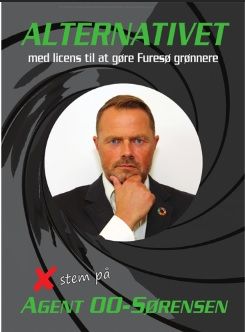 “I try to make my opinion known as a blogger and debater in the digital universe, especially on social media,” explains special operative ‘Agent 00 Sørensen’, who is a software specialist by day. He is rallying for “municipal de-bureaucratisation” and “more political transparency”, as well as binning austerity measures in the welfare sector. Catch him freediving with a harpoon in Furesø Lake, parachuting into government complexes by night, or at one of the municipality’s many local social community clubs.

By lacing up in a pair of boxing gloves for his campaign poster, commercial pilot HP Beck, 38, is literally fighting for our social rights. “I worked as a care assistant for almost 15 years for disabled children and adults,” he says. “I have been ‘on the floor’ – I’ve seen what happens when the funding for the disabled is cut and administrative requirements increase.” He stands for “realistic proposals for the country’s problems”, and he calls the light rail a “weird project” and a waste of taxpayer money. 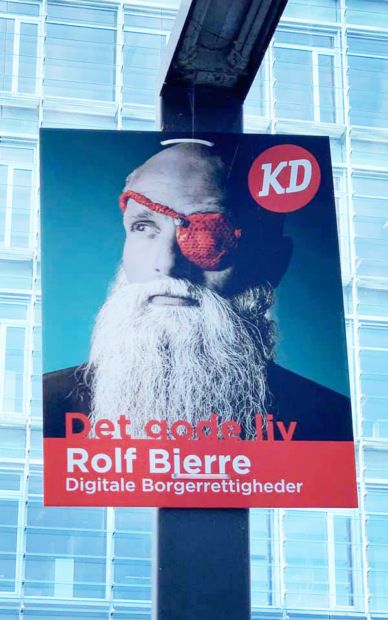 Let’s make no bones about it, Rolf Bjerre is a badass. Firstly, he’s wearing an eyepatch. Secondly, he’s fighting for “a proper digital foundation in Copenhagen and Denmark” and lists Edward Snowden as one of his political role-models. He wants to reorganise the capital’s digital infrastructure and encode it using open-source code, “so everyone can see how our data is processed”, and to build in digital civil rights to help us to navigate the coming digital era. 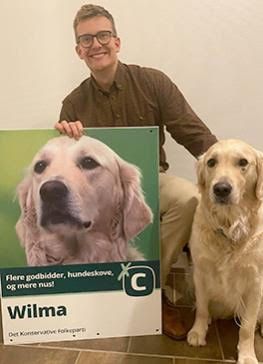 Clearly the rules governing election posters are loose, but surely a candidate must, at the very least, be a human? Well, no, as Andreas Karlsen has proved with his campaign billboard featuring his dog, Wilma. “Ringsted must be on the map! It is time for greater ambitions for Ringsted municipality,” says Karlsen. When asked who should be mayor of Ringsted, he answered “Andreas Karlsen”. Wilma, a golden retriever, had little to add on the matter. Maybe she supports Enhedslisten.

“I am a nonbinary trans person, born in 1968, married to Åsa and have two boys aged 13 and 15,” says Maare, who is holding the fort as the only trans-identifying election candidate. Their policies centre on urban communities with space for everyone – “because it is so important that we interact across social strata”, they explain. Maare has 26 years of experience working with city lighting – half of which has been in project-managing the construction of energy-saving lights around Copenhagen. 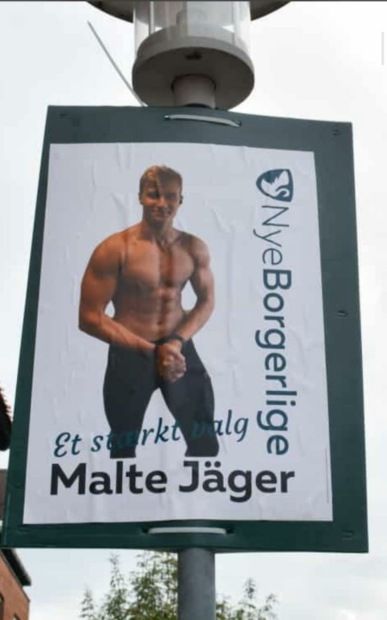 19-year-old Malte Jäger is taking the ‘sex sells’ approach by going shirtless on his election posters. To be fair to the man – he is ripped. Unfortunately his policies are less so. “Roughly speaking, all taxes must be reduced” and “basically, municipalities, regions and the state decide too much”, he asserts. Did he write them last-minute as the teacher was coming round to collect them? Jäger wants less state control, but has no idea how or why. Once more for those at the back, though: he is absolutely peeled. 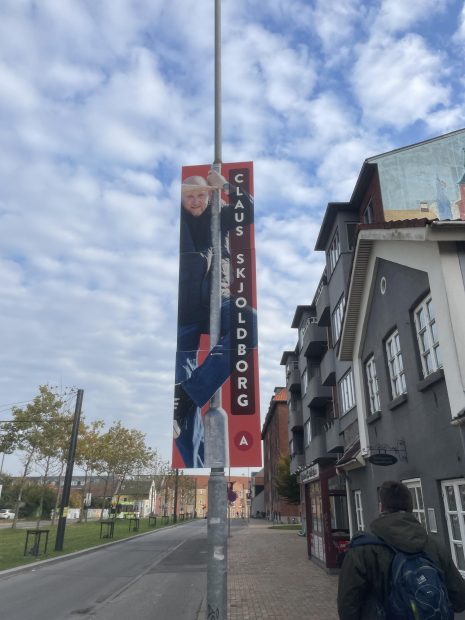 HP Beck might struggle in the ring against this contender. “I’m probably the hardest-hitting local politician,” says Claus Skjoldborg, who is both a city councillor and Mixed Martial Arts fighter. He’s the CEO of MyFightBook – a digital platform connecting MMA federations, clubs and fighters. Skjoldborg wins this year’s Most Creative Billboard award for wrapping himself around a lamppost in the fashion of someone about to perform a savage elbow drop from above on passing constituents. 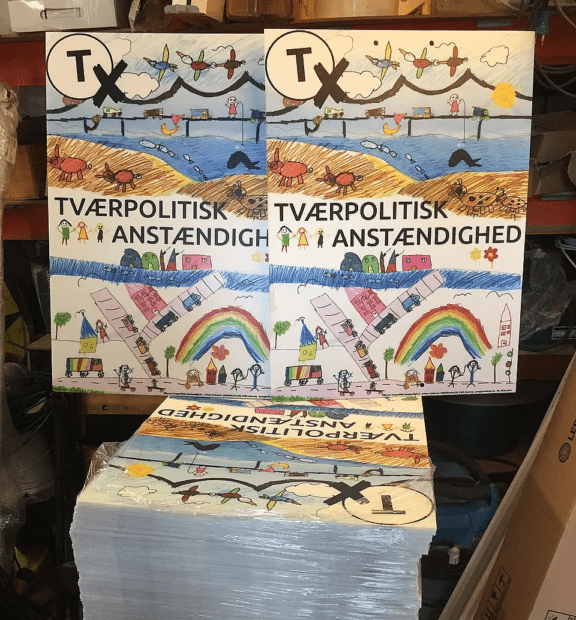 Instead of his face, Jens Andersen has opted for an illustration by six-year-old Sally Nyhus Madsen of what should comprise a good municipality. Sea animals, rainbows, cows, pigs, beaches, roads and bridges feature heavily – though Andersen’s election promises are more focused on improving communication between city council committee chairmen and local citizens and supporting core welfare services. It’s yet to be seen whether he will implement the controversial pigs-on-the-street pavement.

Per Clausen; Enhedslisten in Aalborg 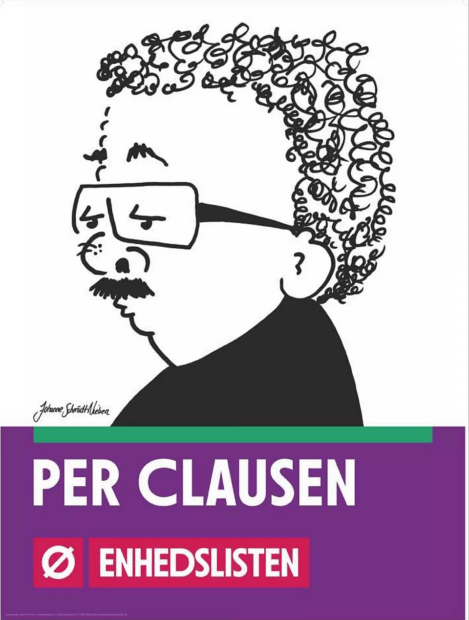 Per Clausen’s black-and-white caricature election-poster has become a cult image in Denmark. Penned by Johanne Schmidt-Nielsen, a colleague of Clausen’s in Folketinget, the cartoon appealed to Clausen so much that he decided to use it in his campaign back in 2017. Fast forward to today: if it ain’t broke don’t fix it. Clausen, who was a member of Folketinget from 2005-15, now sits on the Aalborg city council, where he has represented the landscape, elderly and disability and school committees.

“I myself have been diagnosed with bipolar disorder and therefore know how difficult help can be to find when one is mentally vulnerable, and I know the stigma that people with mental illness encounter,” says Ghanbari, who advocates for increased research and support around mental health, more affordable housing and more free art on the streets. Ghanbari has led by example by putting out a slew of artistic election posters adorned with paintings of local areas that reference film, art and modern technology. 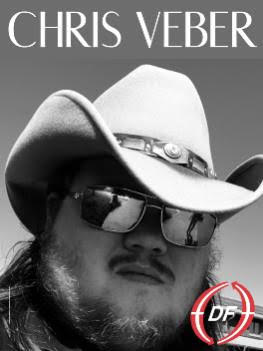 There’s a lot to unpack here: the cowboy hat, the mirrored shades, the nostalgic black-and-white, the tough-guy grimace and ‘CHRIS VEBER’ in cinematic font. Pictures speak louder than words, and Veber seems to be saying “There’s a new sheriff in Guldborgsund” and “I run a meme page”. Whatever he’s communicating, it’s a power-move – just like his role model, Nigel Farage. “He has fought for his cause and reached it. You have to respect that,” says Veber, of the widely-disliked ex-Brexit-Party leader.

Just who is the mysterious Alexander Ryle who has no picture at all? With a poster as personality-less as a PowerPoint slide, maybe he felt his face would distract from his political message. Maybe he couldn’t get a babysitter on the day they shot the portraits. Or maybe he’s just a rebel without a … Whatever the reason, a disembodied quote about society hanging blandly off a traffic light isn’t winning any points for visuals. Ryle wants more affordable housing and more spending on welfare for vulnerable citizens. 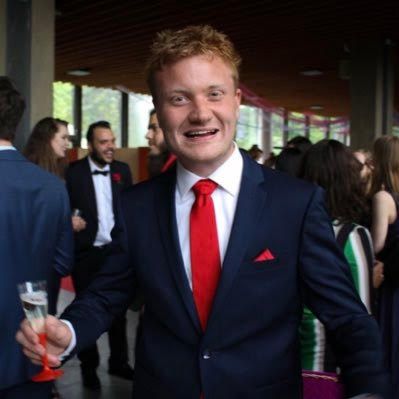 The ‘Mexican-themed Election Party’ party, headed by Michael Staal-Olsen, delivered on its one and only policy last Saturday by holding a Mexican election party. In that sense it’s nailed 100 percent of its election promises ahead of the vote. Impressive. Staal-Olsen invited a food truck to attend and rustled up 5,000 kroner from the party support pool, while a piñata was donated by the Mexican Embassy for the event. So a bit like Fastelavn meets Mexican Day of the Dead. 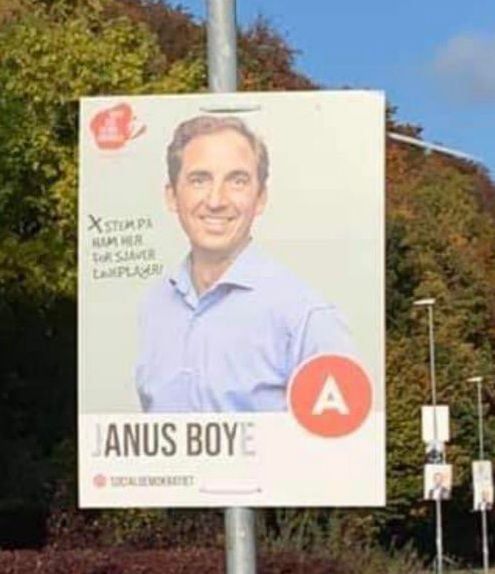 When Janus Boye’s election posters were ‘amended’ to read ANUS BOY just four days after going up, Boye offered a somewhat baffling explanation: the ink forming the letters J and E was not able to tolerate sun-exposure. “My first thought was how embarrassing,” he told Ekstra Bladet. The jury’s out on whether his next move was defiance or self-sabotage: “I considered taking them down, but then a friend said to me ‘it’s funny, leave them up’, so I did.”