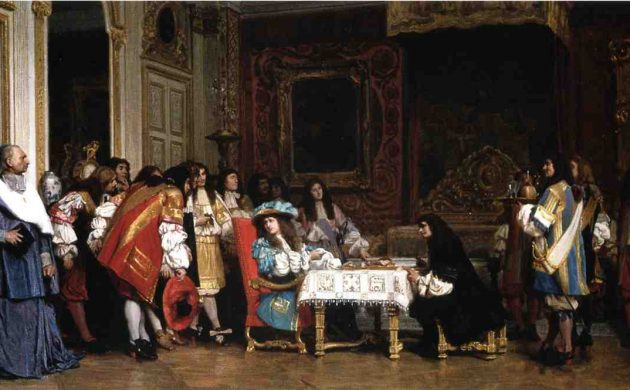 Two peas in a pod: 17th Century French playwright Molière, who was famous for his religious satire, with King Louis XIV , who was renowned for his sour relationship with Pope Innocent XI (image: Jean-Léon Gérôme, 1862)
November 16th, 2021 11:00 am| by Lena Hunter

What with the Holy War, the bloody infighting in Christianity and the general reports of medieval barbarism, it’s common to perceive the Middle Ages as more pious than the atheistic modern era.

But that might not be so. In a new paper, ‘The Gospel of Deviance’, satire researcher Dennis Meyhoff Brink from the University of Copenhagen has traced the early roots of religious criticism to the 1100s and argues that satire actually played a greater role in the spread of democratic values ​​in medieval Europe than Christianity itself.

The seeds of dissent
It was during the 12th century, slap-bang in the middle of the Crusades, that critical writings mocking the pope and his cardinals, accusing them of ‘hypocrisy’ and ‘greed’, first began to surface.

Literacy rates then were relatively low. “The satire of religion in the Middle Ages was an underground phenomenon, disseminated anonymously by a few learned men. It really took off with the invention of printing in the 15th century and the Reformation in the 16th,” explains Brink.

His thesis documents the crossover of tropes of religious satire into mainstream art and literature.

Engrained in art
“The playwright Molière’s play ‘Tartuffe’ from 1664 is a model example. It exhibits religious authority as deceptive and hypocritical. It was so successful that words like ‘tartuffery’ began to appear in dictionaries to denote hypocrisy,” says Brink.

He posits that this example, and many like it, of change in language and imagination wrought by satire had lasting effects on popular perceptions of authority and the self.

“Satire offers us a different perspective. Especially in the Age of Enlightenment, it gave Europeans the courage to step out of our submission to the state and church. That’s what the Enlightenment philosopher Kant is talking about when he describes the ‘enlightened man’,” he continues.

A formative influence
Brink therefore claims that satire proved to be more influential in the spread of democracy than Christianity.

“Satire is a special form of criticism. It exposes the abuse of power and privileges, and it takes liberties that other types of criticism cannot,” he ventures.

“It was extremely widespread in Europe. It’s very likely that it has had a formative influence on European culture.”

Danish chemist helps to prolong life of world-famous shipwreck
A Dane has helped to develop an advanced new X-ray method used to identify harmful substances that are quietly eating through the remains of the 400-year-old English warship Mary Rose, which is on display at Portsmouth’s Mary Rose Museum. The research team – including Kirsten Marie Ørnsbjerg Jensen, a chemist from the University of Copenhagen – hopes the method can extend the life of these and other famous remains. The Mary Rose sank in 1543 during a naval battle between England and France. It was first rescued in 1982 in what remains the world’s most expensive shipwreck rescue, watched on live TV by 60 million people. Some 19,000 other Tudor items were salvaged.

New study into plant protein extraction underway
Researchers from the University of Copenhagen are investigating how pea seeds make their protein bioavailable for germination. The hypothesis is that enzymes in the plant soften the seed to release the protein. Identifying the combination of enzymes may help to create a more sustainable commercial protein extraction method for peas, beans and lentils.

New species of beaked whale identified
New research, assisted by Professor Morten Tange Olsen from the University of Copenhagen, on the bones of a dead whale that washed up on New Zealand’s west coast 10 years ago has revealed that it did not belong to the species Trues Beaked Whale as was thought, but to a completely new species. Suspicion was aroused when a local Maori woman, Ramari Stewart, an expert on traditional Maori knowledge of the sea, flagged the carcass as unusual. The animal was named Ramiri’s Beaked Whale in her honour.

Danish electrolysis plant launches huge hydrogen project
The construction of a 100 MW electrolysis plant has just received 30 million euros in support from the EU Horizon 2020 program. The new GreenHyScale project, which is being supported by research from DTU, has been launched in the green industrial park GreenLab in Skive, where so-called ‘Power-to-X’ technology will convert renewable solar and wind energy into hydrogen fuel. The project is the largest of its kind so far.

New report warns of energy-hungry data centres
The growing need for energy-hungry data centres could jeopardise the EU’s goal to become CO2-neutral by 2050. In Denmark alone, they are forecast to increase national energy consumption by 17 percent over the next ten years. A report by a Danish project called Cool-Data argues we must rethink the way the climate footprints of data centres are calculated, match the power consumption with green electricity and reuse the surplus heat generated.

Bitten by a forest tick? Now you can register it
Some ticks are carriers of various bacteria, such as Borrelia, and viruses such as Lyme disease and tick-borne encephalitis (caused by the TBE virus). If you, your child or your pet get bitten in Denmark, you can now register the location of the bite at flåtinfo.dk to help researchers map the prevalence of ticks. You can also register crawling ticks. With a precise nationwide map of where and when tick bites occur, the data can be compared with the prevalence of various tick-borne diseases.

Deep-sea bacteria surprise scientists
SDU researchers have discovered a certain type of bacteria that thrives 10km below sea level under extreme pressure. The research team, led by Professor Bo Thamdrup, identified that so-called anammox bacteria are attracted to nitrogen in the deep-sea, one of many nutrients found down there. The bacteria ‘eat’ nitrogen compounds in the form of ammonium and nitrite and convert these into nitrogen gas, which is the main component in the atmosphere.

Top Belgian researcher moving studies to Aarhus
The Novo Nordisk Foundation has awarded a 50 million kroner grant to Belgian professor Peter Carmeliet, who will now continue his pioneering research at Aarhus University. Carmeliet studies methods for rapidly clarifying whether a potential drug target is of interest to the pharmaceutical industry or not – a process that usually takes many years and slows the progression of effective new drugs to market.