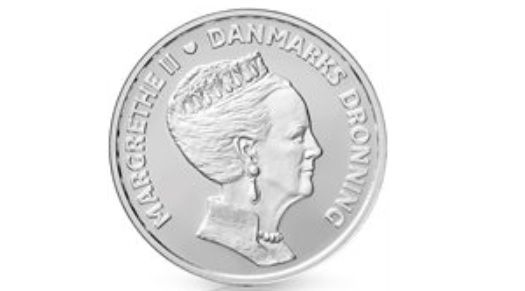 Three coins are being released on Thursday to commemorate the 50th anniversary of Queen Margrethe’s accession to the throne.

Apparently, the new headshot of the queen has been inspired by paper cuttings and is rooted in the Minimalist sculpture tradition, while the ‘tails’ motif is the number 50.

Among them are a celebration at City Hall, a gala performance at Gamle Scene and a service at Copenhagen Cathedral.

The queen has technically been monarch since 14 January 1972, so the exact 50-year anniversary is on Friday, although she had to wait a day until she was officially proclaimed by the then PM Jens Otto Krag from the balcony of Christiansborg Palace.

Firearms arrests in Copenhagen
Copenhagen Police have arrested seven men from the city’s gang environment in connection with the possession and smuggling of firearms. Several searches were carried out following the arrests. The men are all aged 20-24.

Vegan party co-founder thrown out
Veganpartiet, which in 2020 secured the necessary 20,000 endorsements to contest the next general election, has taken a backward step with the news that co-founder Henrik Vindfeldt has been thrown out of the party following some degrading and abusive behaviour. However, it hastened to add it was of a non-sexual nature.

Food wholesaler gets three years for VAT avoidance
A Frederiksberg  food wholesaler has been sent to prison for three years for cheating the state out of 31 million kroner in unpaid VAT. The 58-year-old man, who holds both Danish and Swedish passports, kept on letting his companies go bankrupt to avoid paying taxes. In total, it is believed he opened and closed 22 companies.

Cyclist promoted to role of joint captain for Tour de France
Jonas Vingegaard, the Danish cyclist who finished second in the Tour de France last year, has been promoted by his Dutch team Jumbo-Visma. Vingegaard will share the captaincy with Primoz Roglic, thus enabling him to compete for the Yellow Jersey for a second year running. Last year, he was promoted to the role of captain following the Slovenian three-time Vuelta a España winner’s withdrawal after Stage 8.

Cannabis smuggling arrests in Jutland
Four men were yesterday arrested in Horsens and Randers in connection with efforts to smuggle cannabis into Norway. Some 226 kilos of the drug was found at a Horsens address, confirmed the National Unit for Special Crime (NSK), which is working on the case in collaboration with Norwegian unit Kripos. It is believed that two October arrests are also connected to the operation.

Acclaim for Thy in New York Times
Thy in North Jutland has been named the 27th best climate-friendly place to visit in the world by the New York Times. Described as an epicentre for wind energy, Testcenter Østerild was recommended as a great place to visit and learn about the renewable energy close-up. The beer from Thisted Bryghus was also given a thumbs up, along with the Medvind fish auction. In total, there were 52 inclusions on the list.

Minister still looking for non-EU country to look after asylum-seekers
Mattias Tesfaye, the immigration and integration minister, remains hopeful that Denmark can find a partner outside the EU to look after its asylum-seekers. Another wave is shortly expected to hit Europe, originating via the Mediterranean, warns the UN High Commissioner for Refugees, and Tesfaye wants to have a system in place fast to deal with spontaneous refugees who show up in Denmark.