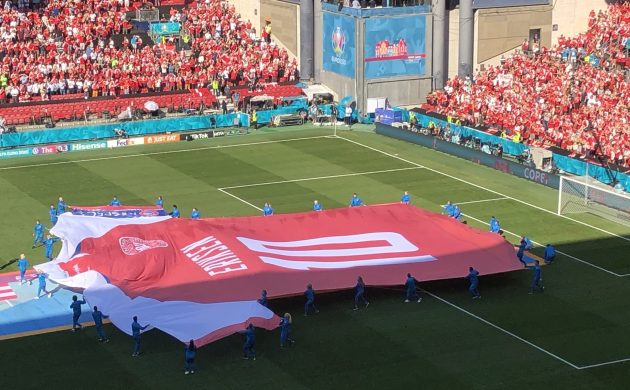 The shirt befitted the big hand shown by the nation (photo: Christian Wenande)
January 20th, 2022 5:17 am| by Christian W

Ah 2021. Ye olde bugger. How many sporting delights you brought us, and yet many of us are pleased to see you in the rear view mirror.

So no review of Danish sport would feel complete without a bottom five as well.

But somehow, a year that pushed athletes to the limit also managed to become one of the most memorable in recent history … at least in Denmark.

Ample to pick from
Despite facing tough restrictions and empty stadiums, Denmark managed to accumulate 16 medals at the Olympic and Paralympic Games in Tokyo – which was more than predicted.

2021 provided loads of exceptional sporting endeavours that could have made our top five, but ultimately fell just short – casualties of a nation punching above its weight.

But there could only be five, so some were bound to undeservedly miss out.

1 Men’s football team
Who can forget the emotional rollercoaster of Euro 2020. From the brutal lows of Christian Eriksen’s collapse to the crescendo of excitement as the team battled back to reach the semi-finals, the team galvanised a nation and beyond with its gritty determination and indomitable spirit. Coach Kasper Hjulmand and players like Simon Kjær, Joachim Mæhle and Mikkel Damsgaard could easily have made this list on individual merit alone, but it was as a team that Denmark inspired millions in the tournament. Emotions have rarely run as high as in Parken Stadium in the games against Belgium and Russia. You had to be made of stone not to have got a little misty-eyed. The icing on the cake was how the team then proceeded to qualify for the 2022 World Cup in stunning fashion, not conceding a single goal in their first eight games.

2 Viktor Axelsen
If it wasn’t for Euro 2020, Viktor would have been the victor. No doubt. In what was arguably the best year for an individual in Danish badminton history, Axelsen was untouchable for much of 2021, finishing the year ranked number one in the world. Among his accomplishments were winning the Thailand Open, Denmark Open, Indonesia Open and bringing home Olympic gold. He also reached the finals of the All England and the World Tour finale. In short, an epic year for the Funen lad.

3 Jonas Vingegaard
Kasper Asgreen and Magnus Cort both enjoyed great seasons on the World Tour, but it was the relatively unknown Jonas Vingegaard who really turned heads. Aside from winning the Settimana Internazionale Coppi e Bartali and stages on the UAE Tour, Vingegaard showed he is the biggest Grand Tour winning hope to come out of Denmark since Jakob Fuglsang when he finished second in the Tour de France. It was the first time a Dane has made the podium of the world’s most gruelling sports race since Bjarne Riis in 1996. Can he go all the way in 2022?

4 Clara Tauson
When 2020 ended, Denmark’s new tennis darling, ranked 152nd in the world, set a personal goal to crack the top 100 in 2021. Well, mission accomplished … and then some! Despite battling some injuries and temper issues, the 19-year-old won two WTA titles and landed her first Grand Slam appearance at the Australian Open. As 2021 came to a close, she had vaulted over 100 spots up the world rankings to 44th, well ahead of her personal goal. What can she accomplish in 2022? If she can steer clear of injuries, the top 25 could be well within her sights.

5 Men’s handball team
To be honest, it’s tough to omit the men’s handball team pretty much any year these days. Mikkel Hansen and company just keep gobbling up medals. This year was no different as the lads picked up gold at the World Championships and a silver at the Olympics in Tokyo. More medals could be on the horizon with the European Championships lurking around the corner. Special mention goes out to 22-year-old Mathias Gidsel, who burst onto the handball scene in 2021 with a series of cracking performances.