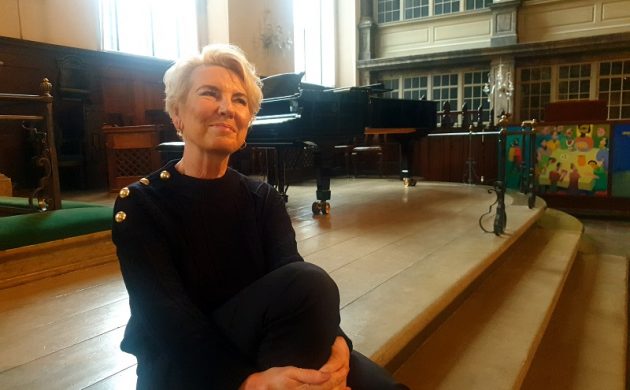 Pia Søltoft has great experience in hosting evenings like these, and few places are as ideal for the group discussions as Christians Kirke, she says: “This room is not alone beautiful and very unique. The possibility of gathering in the gallery rooms makes adds a safe and private touch to the group discussion.”
January 19th, 2022 9:27 am| by This content is sponsored

By the foot of Strandgade, Christianshavn, the old Rococo-style church Christians Kirke is opening its doors to internationals seeking a deeper understanding of the cultural heritage of Denmark – and an exploration of the perhaps hardest question of them all: what it means to be a human being

In the years of The Golden Age, one could barely take a stroll along the streets or walls of Copenhagen without passing by some great artist, thinker or writer, one after the other! The time was a spiritual and intellectual crucible and new ideas and thoughts coursed their way into all matters of existence. But three great thinkers were particularly important for the spiritual and religious blossoming during this time: Hans Christian Andersen, Søren Kierkegaard and Nicolai Frederik Severin Grundtvig.

These are the three great thinkers international citizens are invited to explore during a series of events in Christians Kirke, Christianshavn.

Pia Søltoft, reverend at Christians Kirke and host of each evening, explains the vision behind the concept and the reasons for highlighting these three great thinkers for an international audience eager to get a deeper understanding of Danish culture. Read more about the event here.

Why are these three thinkers singled out to lay the basis for the events in Christians Kirke?
H.C. Andersen, Kierkegaard and N.F.S. Grundtvig are all essential to understanding Danish culture and our cultural heritage. This heritage is inseparable from Christianity and the role which the church and Christian values play in the way we see and understand ourselves, even on an unconscious or unspoken level. From this perspective, it is only natural for the church to host a series of events introducing these three thinkers for international citizens.

Can you give any examples of how each of these thinkers was influenced by Christian values – and vice versa?
The world-renowned fairy tales by H.C. Andersen always make an ethical point and stem from a religious mindset expressed in a new literary form. Furthermore, his writings have had a substantial influence on what is considered morally good and bad in Danish society to this day. In The Ugly Duckling, for example, we learn the message that inner values are what really count. In The Emperor’s New Clothes we are reminded that arrogant pride will be revealed and bring you down.

The priest and famous hymn writer N.F.S. Grundtvig has without doubt been of great importance to the role trust and community spirit play in Danish society today. His influence on the idea and concept of folk high schools and his legacy in Danish hymn writing are beyond comparison – as is his influence on the liturgy of the Christian worship service in Denmark and on the concept of the Danish Folkekirke in itself.

Søren Kierkegaard’s views on individual choice and matters of faith probably have not marked the general public consciousness as much as Andersen and Grundtvig. Globally, however, his works have greatly influenced how we – philosophically, religiously and existentially – think of human nature as well as the nature of anxiety and love. From Kierkegaard we have also learned about personal responsibility – and that faith and love are experienced the same way: like throwing oneself out into waters “70,000 fathoms deep”.

The concept combines short introductions with group discussions. Why is that?
During these evenings, we don’t only bring forth ideas and thoughts born in The Golden Age. The concept itself stems from that era as well. Back then, members of the esteemed part of society would gather around food and wine and share conversations – but not focusing on personal and social matters. Instead, the focus of these conversations were particular topics chosen in advance.

This concept has laid the foundations for the upcoming evenings in Christians Kirke. Here, we will begin with an introduction to the work and legacy of the thinker in question. Each evening we have invited a highly esteemed scholar to introduce us to the most important aspects of the thinker’s work and to their biographical and historical background. After this, participants are divided into small groups and asked to share their thoughts on a number of existential questions, selected in advance and handed out to them. It could be questions exploring the nature of free will, despair, sorrow or love.

You have great experience hosting this form of events in Christians Kirke and other churches. What makes the concept and the church location go so well together?
Due to its outstanding and rare architectural style, Christians Kirke is ideal for this type of gathering. The galleries of individual seating areas invite the sharing of one’s thoughts in a safe and almost homely atmosphere. After the group discussions we gather around a light serving of cheese and wine in the open church space – and bring the various thoughts shared in the smaller groups out in the open.

But beyond any architectural features, the church offers a space for all the big questions in life – no matter what religious observance one may or may not have. The Danish Folkekirke is characterized by a high level of openness – and in Christians Kirke, we hope to open our doors for international citizens not only to important pieces of Danish cultural heritage, but also to the open space where we can all get a deeper understanding of who we are as human beings.

Great Danes on The Golden Age is hosted in Christians Kirke, Christianshavn, during Spring 2022 – the first time being on January 26. Last chance for signing up is January 23. Read more and register your attendance at https://christianskirke.dk/great-danes