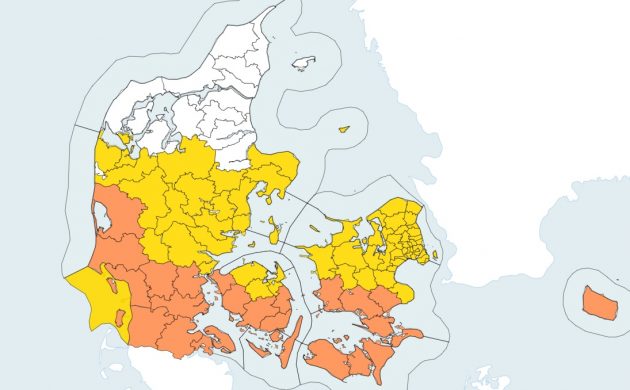 Move aside Malik because Storm Nora is heading our way.

Last night – the remnants of a storm called Dudley in the UK – was just the warm-up act because Nora looks set to cause havoc when it sweeps across Denmark over the course of Friday night.

It’s been christened Eunice in the UK, but the DMI weather forecaster has judged that as too difficult to pronounce.

That might not go down well with EU headquarters as the 27 members agreed this week to give storms the same name in each country to avoid confusion.

Friday night, Saturday morning
Nora will hit Denmark with hurricane-strength gusts. It will pass over the country between 20:00 on Friday and 10:00 on Saturday.

It is forecast to hit the southern part of the country and Bornholm most severely, but central Denmark and the capital region will sustain high wind speeds.

According to DMI’s weather warning, average wind speeds will range from 20 to 27 metres per second, and gusts from 32-37 m/s.

It will move quickly, so each area should only sustain strong winds for three to six hours.

The exact trajectory remains uncertain, so the whole of the country is very much in the firing line.

In other storm-related news:

– Following last night’s high winds, water levels are critically high in the Wadden Sea: between 2.4 and 2.7 metres above normal.

– Two sailors aged 55 and 48 are feared dead in waters off northwest Zealand. They yesterday embarked on a sailing trip from Røsnæs to Havnsø. A search was called off due to the high winds, but might resume today.

– A fallen tree brought a complete halt to train services between Odense and Fredericia last night. A replacement bus service has been in operation. Meanwhile, on the Copenhagen to Helsingør line, services have been seriously disrupted by a fallen tree near Nivå.

– Several ferry routes were cancelled on Thursday, including routes between Fynshav and Bøjden and between Gedser and Rostock. Bornholm services were also suspended.

– A 23-year-old man lost his life in a work accident at Skoleskibet Danmark in Assens on Funen yesterday. He fell from a mast. It is unclear whether high winds played a part.

– The cost of lumpfish roe has soared this year due to the high winds because they have made it far harder to be collected. The price per kilo of the ‘poor man’s caviar’ is currently 650 kroner, compared to 389 last year. One auction house has sold only 1.8 tonnes, compared to 11 tonnes this time last year.