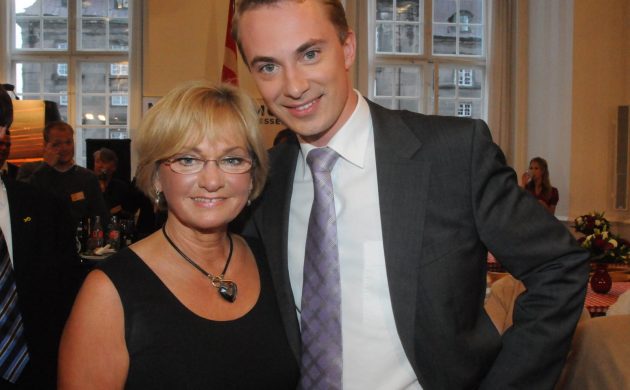 It would appear voters are more persuaded by ‘dream team’ Pia and Morten than the five MPs who have thrown their toys out of the pram and deserted the party (photo: Hasse Ferrold)
February 23rd, 2022 10:03 am| by Bartholomew Skala

On the face of it, yesterday was what they call a bad day in politics for Dansk Folkeparti leader Morten Messerschmidt, as no fewer than five of the right-wing party’s 16 MPs have jumped ship to become non-attached members.

However, a very different story is being told in the polls since Messerschmidt’s election last month.

Since then, the party has theoretically gained four seats in Parliament – an increase in public support of 50 percent since December 8, according to the Epinion poll conducted on February 17.

Suddenly the race is tight again
Not only do these polls indicate that Messerschmidt is well liked by right-wing supporters, but he is also fuelling a general rise in popularity for the right coalition.

If a general election were to take place today, the red bloc would win 49.5 percent of the vote (88 seats), and the blue bloc 48.3 percent (87) – accounting for 175 of Parliament’s 179 seats. The remaining four, representing Greenland and the Faroes, tend to be shared.

This is the closest the right has been to a majority since well before the 2019 General Election, which the left bloc won with 93 seats, compared to the right’s 76.

Since December, three seats have flipped from the red bloc to the blue bloc: a swing of six. Two have been lost by Socialdemokratiet – pundits concur the government party took a hefty number of DF voters with its pre-election anti-immigration policy – and one from SF.

Pia Kjærsgaard blamed for toxic environment
Nevertheless, losing five MPs in one day is troubling – particularly as the action has obviously been co-ordinated to hurt the new leader.

Many of the departing MPs have expressed their disapproval about the influence of Pia Kjærsgaard, the co-founder and long-time, inaugural leader of the party, who clearly views protégé Messerschmidt as her natural successor.

It is alleged she brings a toxic environment to Parliament.

“There are a lot of people who are nervous when they see Pia in the hallways,” one of the departing MPs, Liselott Blixt, told DR.

“It is adult bullying … and a work environment that is not healthy. We have people who go home crying.”

Blixt will now continue as an independent, but with public support for the party she left growing at a fast rate, it is doubtful she has good prospects heading towards the next election.