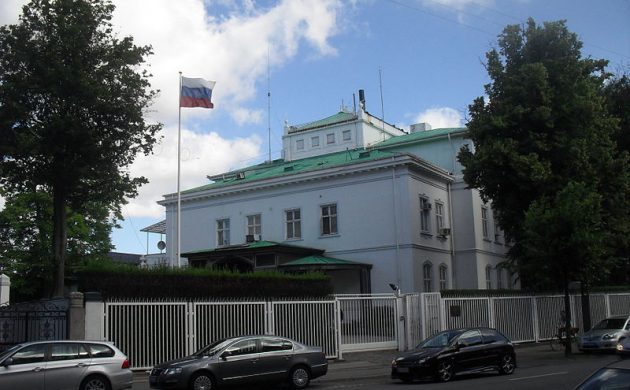 Spies with diplomatic status at the Russian Embassy in Copenhagen (photo: Niels Elgaard Larsen)
April 5th, 2022 10:39 am| by Christian W

The Foreign Ministry informed Russian ambassador Vladimir Barbin of the move this morning, citing that the individuals have two weeks to leave the country.

According to the ministry, the 15 individuals have been working under diplomatic cover at the Russian Embassy in Copenhagen.

Barbin was also confronted with the government’s condemnation of Russian brutality against civilians in Ukraine – most recently laid bare by the horrific images from Bucha.

Maintaining ties to Moscow
“This will signal to Moscow that we won’t accept Russian intelligence officers spying on Danish territory,” said the foreign minister, Jeppe Kofod.

“They constitute a risk for our national security, which we cannot overlook. Along with a number of our closest allies, we are therefore puting our foot down on the espionage the identified persons practise under the cover of diplomatic status.”

The Foreign Ministry underlined it did not want to sever diplomatic ties with Moscow as the embassy in Copenhagen is the primary channel of communication with the Kremlin.

Aside from Denmark, France, Germany and the Netherlands have undertaken similar actions this week.