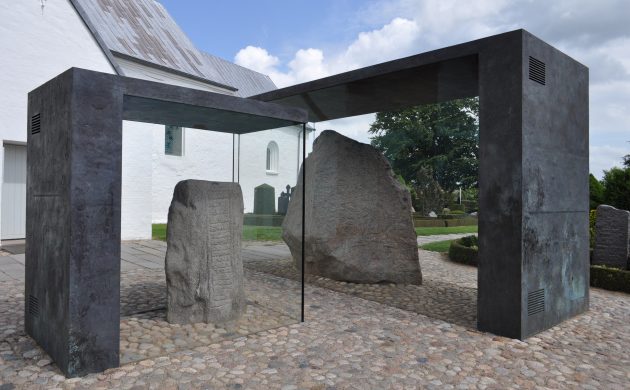 The stone discovered outside Randers is likely older than the Jelling Stones (photo: Ajepbah)
June 16th, 2022 2:10 pm| by Jared Paolino

A centuries-old runestone has been discovered beneath a property near Randers, reports DR. The stone is two metres long and 80 centimetres wide, weighs almost 900 kilos, and may be older than Denmark’s famous Jelling Stones – the 10th century monoliths that, in addition to the burial mounds and small church nearby, make up one of the country’s seven UNSECO World Heritage Sites

Lene Brandt and her husband Anders Nielsen discovered this piece of history while renovating their kitchen. After turning down a neighbour’s offer to cut the stone into pieces, the couple lifted the stone out with a crane. It was then an amateur archaeologist who noticed the runes in a picture shared on Facebook

“The more floor we removed, the larger the stone became. I’m a little proud that it was found here, and that we managed to get it transported out in one piece,” said Brandt.

Mosekærstenen
The couple first contacted an archaeologist from Museum Østjylland to verify their discovery. The museum’s chief inspector and archaeologist, Benita Clemmensen, then contacted Lisbeth Imer, a runologist at the National Museum in Copenhagen, who deciphered the writing on the stone.

The stone will now be included in the National Museum’s official collection, with the possibility of it later being lent to Museum Østjylland for an exhibition. It has been named “Mosekærstenen” after the village of Mosekær in which it was discovered.

The Danefæ bounty
Mosekærstenen is the 44th rune stone found in the area around Brandt and Nielsen’s home, but it is the first since 1995, when one was discovered during construction work at Borup Church north of Randers.

Under the Law of Danefæ, which ensures that important finds from Denmark’s past are preserved for future generations, Mosekærstenen now belongs to the state. However, it is possible to receive a so-called Danefæ Bounty – the amount of which is determined by the National Museum according to the rarity and material value of the find.

Brandt and Nielsen are still waiting to find out if the Danefæ Bounty will cover the cost of their kitchen renovation.