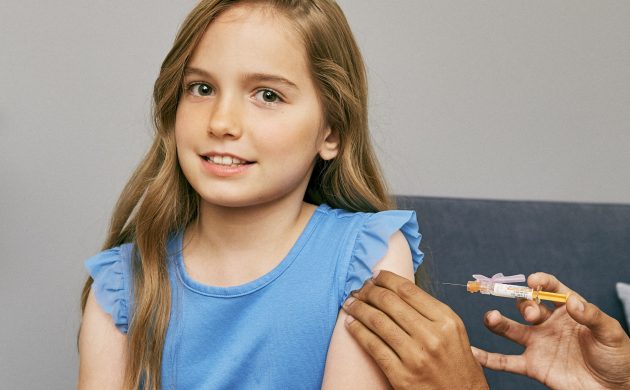 The Danish prime minister says she does not regret recommending vaccinations for children in the past (photo: SELF Magazine)
June 24th, 2022 12:33 pm| by TheCopenhagenPost

The COVID-19 vaccine will no longer be recommended for children, according to Søren Brostrøm, the head of the Sundhedsstyrelsen health authority.

Instead, only particularly vulnerable and Danes over the age of 50 will be recommended a vaccine in the autumn.

PM defends the decision
According to Brostrøm, the vaccination of children last autumn and winter did little to slow the spread of the virus.

PM Mette Frederiksen has stood by the decision, saying that no harm was done, and that it was the best decision given the information available at the time.

Four-year sentence for Danish money launderer
Copenhagen City Court has sentenced a 49-year-old woman to four years and one month in prison for laundering almost 30 billion kroner from 2008 to 2016. Camilla Christiansen allegedly ran her operation through Danske Bank’s Estonian branch, and her clients included – among others – the super-rich of Russia. Christiansen is already serving three years and 11 months on a different money laundering conviction, raising her total time left to serve to 8 years.

Fly species spotted for the first time in 170 years
Kåre Würtz, a biologist, has rediscovered a species that had last been seen in 1850: the Nordic wood sap fly. He made the discovery in the Stenderup forests, working as part of a team that registers nature in state forests on behalf of Naturstyrelsen – the Danish Nature Agency. Along with nearly two dozen other Danish forests, the Stenderup forests have been designated to remain untouched as part of an effort to protect endangered species and promote biodiversity. According to Naturstyrelsen, the discovery of the Nordic wood sap fly is a sign that their efforts may be working.

Bird flu detected, but no need to worry
Fødevarestyrelsen, the Danish Veterinary and Food Administration, has determined that bird flu is responsible for the deaths of seabirds along the west coast of Jutland. The dead birds likely came from British Isles but floated ashore here in Denmark, said Sten Mortensen, head of veterinary disease control at Fødevarestyrelsen, to TV2. According to Mortensen, there is not yet any cause for concern, but Fødevarestyrelsen encourages people to exercise caution around poultry and report any sightings of dead birds.

Investing in hydrogen power
Danmarks Erhvervsfremmebestyrelse, the Danish business promotion board, has decided to invest 225 million kroner in projects related to Power-to-X (PtX) technology – a blanket term for methods that use electricity to produce hydrogen fuel. The board received 19 applications, and 14 projects are now receiving support. The support for the projects is between 0.9 and 88.8 million kroner, and expenses for the projects must be incurred no later than the end of August 2023.

Invasive garden ant species on the way to Denmark
A new species of invasive garden ant is likely to arrive in Denmark this summer, according to researchers at the University to Copenhagen. A warming climate has made Denmark more hospitable to the species, which can form colonies 10 to 100 times larger than the common black garden ant. The invasive garden ant will not impair biodiversity, said the research team, but has the potential to “wreak havoc” on gardens, houses and roads, reported TV2.

Odense light rail is too loud
The Odense Letbane, a new light rail system that open in the city May, has received over 140 noise complaints. Now, the engineering company Cowi has investigated the matter, finding that the tram exceeds municipal noise limits at several locations along its route. Chairman of the board of Odense Letbane, Jesper Rasmussen, has apologized, and both the company and municipality are now looking into solutions.

New grads celebrating dangerously
Across the country, graduating students are now celebrating the completion of their education in a new way – by cruising through city streets with their upper bodies hanging out the car window. The Copenhagen police received 14 reports of the practice on Thursday night and handed out seven fines. Aarhus police have also registered the problem, with spokespeople from both departments criticizing the practice as reckless and dangerous.

Denmark stepping up its NATO involvement
Denmark is sending soldiers on a new NATO mission in the North Atlantic, as well as continuing its involvement in operations in Iraq and the Strait of Hormuz – one of the world’s most important strategic sea passages. Denmark will contribute a frigate of the Iver Huitfeldt class and up to 135 soldiers to the deterrence effort in the North Atlantic, hand over leadership of NATO’s mission in Iraq to Italy, and increase its participation in the European-led monitoring mission in the Strait of Hormuz.