If you’ve been to the city centre recently, you’ve probably noticed that the capital is gearing up for something. Something big.

That analysis would be correct as the Tour de France is in town for the first time in history. Not only that, but for a time trial first stage on July 1 of what is the biggest cycling race on the planet.

And while the cycling capital of the world is oiled up and ready to celebrate, not everything will be smooth pedalling … particularly traffic-wise.

Leave the car
In fact, the public are encouraged to use public transport, cycle or simply walk when moving about the city in the coming few days as numerous key roads will be closed off due to the race.

Fences are going up all across the city on each side of the roads being used in the 13 km time trial … so a bit of simple maths brings it to 26 km of fence.

Some roads, such as HC Andersens Boulevard, are already being closed off, but the entire time trial route will be blocked off from 01:00 on Thursday night to 16:00 on Saturday.

And it’s not just cars that will be blocked out. Bicycles and pedestrians will also be shut out, although there will be a few points (see interactive map here) where all three modes of transportation will be able to cross during limited hours (not from 12:00-20:00).

Parking situation
When it comes to parking spaces, something the city already struggles with, there is more to contend with.

There will be no parking or stopping along the 13km route from 09:00 on Thursday until 16:00 on Saturday.

Furthermore, the same rule will be in force on a number of side-streets adjacent to the route, including big roads like Nørre Voldgade, Vester Søgade and Blegdamsvej.

Illegally parked cars will be removed at the owner’s expense.

Resident parking licenses for the city centre will be temporarily expanded to encompass all parking zones in the city from June 27-July 4.

Similar traffic ramifications can be expected along the routes of the other two stages taking place in Denmark.

Read more about the traffic here (in English). 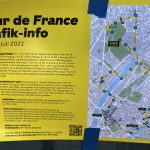