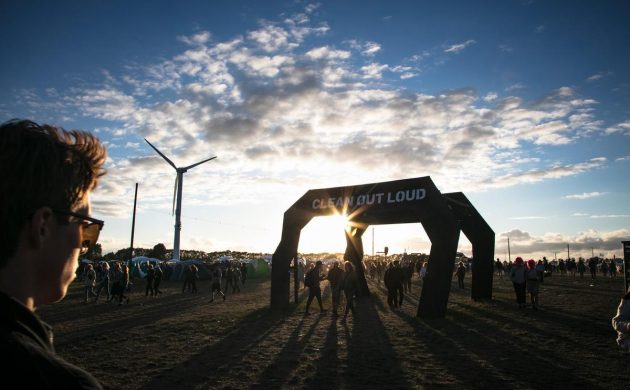 The ‘Clean Out Loud’ campsitse was one of the largest community camping areas at Roskilde Festival this year (photo: Preston Drake-Hillyard)
July 4th, 2022 5:16 pm| by Jared Paolino

It’s a fine line between irony and hypocrisy, and with climate sceptics and deniers always ready to pounce, it’s a line frequently trodden by environmentalists who must balance their ideals with the reality of their own carbon footprint.

Roskilde Festival, the iconic Danish music festival, walks that line at an organisational level. Even though the organisers of the festival have placed greater emphasis on environmental sustainability – as part of a “holistic” sustainability campaign based on environmental, social, artistic, and economic considerations – it has continued to have an enormous environmental impact, especially in terms of waste generation.

If nothing else, the Roskilde Festival is honest about the mess it leaves behind. According to the festival’s own findings, the amount of waste generated by the event increased by 76 tonnes every year over the 20-year study period, resulting in 2,000 tonnes of waste being generated in 2019.

By embracing the reality of its impact – and accepting the irony of its message – the organisers have prepared a solid defence against accusations of hypocrisy. Still, some have said the festival can and should do more to reduce its environmental footprint, while also expressing concern that Roskilde Festival has overstated the breadth and impact of its sustainability efforts.

“It’s inevitable that we create waste …”
I am meeting Sanne Stephansen, Roskilde’s head of sustainability, at ‘The Circular Lab’ – a temporary venue in the festival camping area for young entrepreneurs to share their ideas about green development, waste reduction, and climate action.

The ground is littered with trash. The debris – crushed cans, discarded cups and plastic wrappers – extends not only around the lab, but throughout much of the adjacent camping areas, including two of Roskilde’s community camping areas: ‘Dream City’ and ‘Clean Out Loud’.

Stephansen does not hesitate to acknowledge the irony – or the fact that Roskilde still has a long way to go. I asked her what she’d say to those who’d call it hypocrisy.

“It’s a fair point, and it’s a necessary discussion,” she responded. “When we build the Roskilde Festival, we build a temporary city of 130,000 people. When you gather that many people, it creates a large impression. It’s inevitable that we create waste and that we use resources.”

But there’s a however. “We also have to see what else we bring to the table in terms of arts and activism, community, music, freedom,” she ventured.

A “free space“
It’s true that Roskilde is a yearly highlight for many participants – and a rite of passage for many young Danes. In addition to music, its offerings have come to include speeches, exhibits and other events, while the festival itself has been celebrated as a unique ‘free space’ where young people can explore their identities without the suffocating pressure of societal norms and expectations.

Moreover, the Roskilde Festival is a non-profit event, with its earnings going to a wide range of charitable causes. According to its 2020 report, for example, more than 2 million kroner went to initiatives focused on sustainability, the environment and climate, while millions more were donated to organisations dealing with issues such as human rights, mental health and poverty.

All of this does not excuse the Roskilde Festival’s local environmental impact, said Stephansen, but is at least justification for its continued existence. The question that remains, she said, is “how can we both lower the waste created, and how can we make sure that when waste is created, it’s not lying around like it is lying around us here, but is actually collected, sorted and recycled.”

“The overall goal is to reduce as much as possible”
As a first-time festival-goer, I spent most of my time outside the festival site itself, instead wandering through the expansive campsites that make up the greater Roskilde Festival city. And it is a city, in a metaphorical sense and, to a great extent, a literal one. There are neighbourhoods and districts, alleyways and shortcuts, and thousands of hastily erected homes.

As I walked through them for the first time in the early morning, sleep-deprived and possessed of an overactive imagination, it was like some sort of dystopian wasteland laid out in front of me: a bright sun filtered through haze; haphazard arrays of mismatched shelters; cans, bottles, and broken glass strewn about; and in the early morning – with most festival-goers still recovering from the previous night’s activities – not a soul in sight.

At one point, against the foreground of this rubbish-strewn expanse, a wind turbine in the background, pumping green, renewable energy into the festival site, stands tall as a perfect picture of irony.

It is in these campsites that the majority of waste generated at the Roskilde Festival will be found. According to one estimate, waste abandoned in the camping areas makes up approximately 75 percent of the total waste generated at the festival, largely due to the abandonment of cheap camping equipment by festival-goers. Consequently, waste reduction efforts at the festival have increasingly focused on camping.

According to its resource and waste management plan, the Roskilde Festival aims to reduce waste by 600 tonnes by 2024 – a 30 percent reduction relative to 2019. The target, said Stephansen, was set to be achievable, “but the overall goal is to reduce as much as possible.”

General waste reduction efforts include measures to decrease the use of disposable products, refine temporary construction methods, and improve the sorting of waste. In the camping areas, a new program has been piloted this year to rent out camping equipment – including tents, pavilions and air mattresses.

Other efforts in the campsites have been centred around changing the behaviour of festival-goers, thinking of them as “participants”, rather than just guests.

Not everyone is getting the message. As I walked away from our interview, I watched a young man nonchalantly toss an empty beer can to the ground. Overall, however, the effort has apparently gained traction. Of the estimated 60,000 people who camp at the Roskilde Festival, Stephansen said the majority are living in so-called ‘community camping’ areas, such as ‘Dream City’ and ‘Clean Out Loud’, as well as camps such as ‘Common Ground,’ ‘Leave No Trace’ and ‘Settle’n Share.’

To live in these campsites, “participants indicated ahead of time that they would contribute towards a positive waste culture and keep the area clean during the festival as well as after they leave it.”

Victoria, a 25-year-old from Denmark at her sixth Roskilde, signed up for community camping because it comes with a reserved spot, allowing her to avoid the free-for-all that otherwise takes place as festival-goers rush to find a campsite on opening day.

“I applied so I don’t have to run in and fight with everyone to get a place,” she said.

At the same time, however, she has noticed Roskilde stepping up its sustainability effort, as well as the rise in community camping. “Every year I come here, there’s more messages,” she said. “A couple of years ago, there was not so many areas like this. Now, most of it is Clean Out Loud, or areas like this.”

Tai, a 27-year-old with over a decade of Roskilde experience, expressed his satisfaction with the community camping experience, saying the Clean Out Loud Camp was not only better mantained, but felt safer and friendlier than other areas. However, gesturing to the well-littered ground around him, he conceded that Clean Out Loud was not exactly clean. He also said there were no consequences for failing to live up to the community guidelines.

This was confirmed by the Roskilde Festival in an email, which said: “There are no sanctions for those of the participants who do not clean up their camp after leaving the festival.”

Instead, the email said: “This collaboration between the participants and the festival is based on trust.” The email further stated that no more than four groups in the Clean out Loud area left the festival without cleaning their site in 2018 and 2019.

With that said, Roskilde has also introduced an alternative camping scheme with a more concrete accountability mechanism. Festival-goers who signed up for a ‘Get a Place’ or ‘Get a Camp’ option were required to pay a deposit to reserve their campsite, which is only returned once they have proven their campsite is up to snuff.

“Why are we even allowing other forms of camping?”
Gitte Haar, the head of a private consulting firm called the Center for Circular Economy, has levied criticism against Roskilde Festival for what she has said is an inadequate and exaggerated effort to reduce waste.

Speaking to me over the phone, she identified herself as a long-time festivalgoer herself, and she recognised the societal and cultural significance of the Roskilde Festival, as well as acknowledging the importance of the steps that have been taken so far.

However, according to Haar, the Roskilde Festival could be doing more. She has expressed support for the community and deposit-based camping schemes, for example, but asks: “Why are we even allowing other forms of camping?”

Haar has also expressed concern that the sustainability of certain efforts by the festival, including its camping equipment rental scheme, has been overstated without the documentation to back it up.

“Time will tell …”
Back at the Circular Lab, Stephansen stressed the success of broader sustainability efforts. She noted, for example, that the Roskilde Festival eliminated diesel power this year. Last year, she said, they used 72,000 litres of diesel to generate electricity.

Stephansen also expressed optimism regarding the potential of the festival’s efforts to reduce waste.

“Even though there’s some waste lying around here, I’m thinking it’s better than the last time we’re here,” she said. “But time will tell when we get the data.”