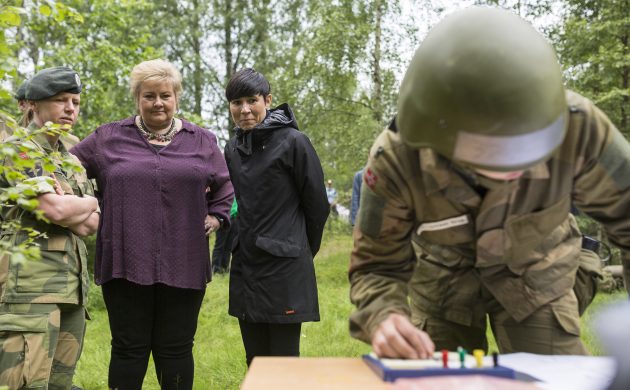 There will be no Forsvarets Dag this year, should a Defence Ministry bill be passed by Parliament.

Forsvarets Dag (defence day) is the name given to the process by which young men are selected for national service by a lottery draw.

Should they be deemed fit enough to serve, an ‘unlucky’ draw will require them to drop all other plans and join the Danish military for a period of 4-12 months, although there are a few exemptions.

Let-off for 30,000
However, corona has been disrupting Forsvarets Dag since 2020 to the extent that the bill will make all men who have turned 18 between 2020 and 2022 exempt from serving.

Closures and restrictions have made it difficult to hold the medical tests that are required before they can serve.

Looks like it has backing
The defence minister, Morten Bødskov, reasons it will take too long to catch up on all the young men who should have been eligible to serve.

“It makes me very sad that it has been necessary [to scrap it] – particularly in light of the current security policy situation with the war in Europe,” he said, according to DR. “I accordingly encourage all young men to enlist voluntarily.”

Benfica thrash FCM to derail their Champions League dreams
FC Midtjylland lost 1-4 to Benfica in Lisbon last night in the first leg of their Champions League qualifier. The winner will advance to the playoffs – where it has been confirmed FC Copenhagen will face Turkish outfit Trabzonspor , the side of its former striker Andreas Cornelius, on August 16 and 24 – and loser to the group stage of the Europa League. FCM, which sacked its coach Bo Henriksen last week, were always going to be huge underdogs. Meanwhile, Brøndby face FC Basel, another unfortunate draw, in the first leg of their Conference League qualifier tomorrow, with a place in the group stage up for grabs should the winner make it through the final round of qualifying. In related news, police made arrests after two officers were injured trying to control supporters of Brøndby and Polish side Pogon Szczecin after their Conference League qualifier.

Guards deployed to Copenhagen railway stations to increase security
Since Monday, 29 guards have been placed at previously unmanned railway stations in the capital area to increase security. As part of the government’s new security package announced last November, DSB is also ensuring the quick deployment of personnel to a further 13 stations. A total of 700 new cameras will be set up at 46 stations and the number of video surveillance staff has also been increased.

Are the police struggling to recruit new officers?
Police cadet numbers are struggling if the Nykøbing Falster training centre is anything to go by. Just five enlisted for the course that started on August 1. Often the course attracts up to 25 prospective police officers. Nykøbing Falster holds four courses every year, with the next one starting in October.

Noise complaint rate appears to be falling
Police in Central and Western Jutland have received far fewer noise complaints this summer. In 2020 and 2021, when more people stayed at home due to corona, they received 3,400 complaints – mostly about loud music. But so far they have only received 558 reports, compared to 1,257 at the end of July last year.

Serious crime unit closes 340 websites suspected of fraud
National enhed for Særlig Kriminalitet (NSK), the national unit for serious crime, has closed down 340 internet domains linked to extensive fraud. Cases continue to escalate, with the elderly, ever encouraged by the state and municipalities to go online for their digital well-being, the most likely victims. Recent scams include fraudsters posing as celebrities seeking investments for made-up projects.

Jobless number rises for second month due to Ukrainian influx
Unemployment rose slightly in June for the second month in a row, according to Danmarks Statistik. The number rose by 1,900, meaning 73,300 people are now unemployed in Denmark – 2.5 percent of the workforce. In May, the rise was 800. However, more Ukrainians (4,500 in May) are judged to be unemployed than before.

Bumper cat delivery to Bornholm animal shelter
An animal shelter got a shock on Bornholm recently when a pensioner handed them 37 cats after conceding she was too old to cope. According to Dyrenes Beskytselses, the cats are very well behaved but a bit flea-bitten. It calls on the islanders to come and adopt one of them.