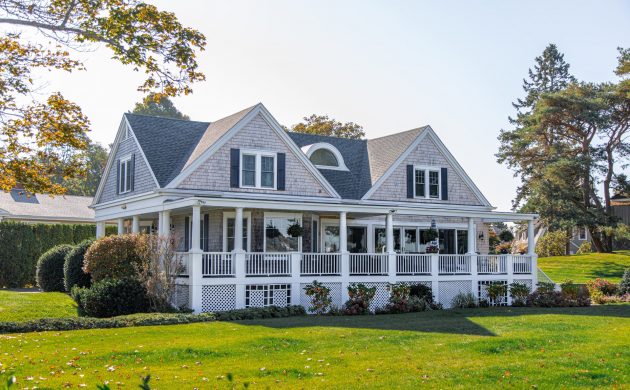 Data from Boligsiden reveals that the price of villas and townhouses fell by 1 percent in July due to high inflation, while the price of flats fell by 1.5 percent. Economists expect further falls in the autumn and winter.

Taking seasonal factors into account, this is the biggest fall in more than a decade. According to Jeppe Juul Borre, the chief economist at Arbejdernes Landsbank, it could be just the start of a long-term decline in housing prices.

Encountering headwinds
Since the spring, central banks around the world – including Denmark’s Nationalbanken – have raised interest rates in response to high inflation.

Lise Nytoft Bergmann, who is Nordea’s chief analyst and housing economist, said in a written comment: “The housing market has encountered headwinds due to rising interest rates and high inflation, so it’s not surprising that prices are starting to fall is not surprising.”

No need to panic
Since last summer, interest in buying a home has slowly diminished, while price trends have “gone from frantic to moderate” and have fallen slightly over the past month.

Bergmann expects this development to continue, but at the same time, she sees “no reason for people to panic”.

“If you’ve owned your house for a long time, it’s not necessarily a bad deal. In the last two years, house prices have risen by around 20 percent. So even if the fall in prices continues into the autumn, overall you’re still profitable,” she said.

Family business Panduro acquired by Nordic group Lekolar
The owners of the world-renowned hobby chain Panduro from Denmark are selling the family business. It was founded in Denmark in the mid-1950s and is currently based in Malmö. The hobby shop chain has a total of 95 shops in Sweden, Denmark, Norway, the Netherlands and Belgium. Its new owner is the Nordic group Lekolar, which supplies schools and daycare facilities with playground equipment, furniture, and hobby and learning products. According to Thomas Panduro, the chain’s current deputy head, it was a difficult decision, but Panduro is convinced that it is the right solution for the company. The deal will take effect in the autumn.

Price increases outpace wage rises
According to Dansk Arbejdsgiverforening (DA), wages rose by 3.4 percent in the second quarter compared to the same period last year in the second quarter – an increase well short of the 7.4 percent rise in prices that took place in the same period. As a result, so-called ‘real wages’ have fallen – i.e the spending power of earners to buy the same things as before. According to Dansk Metal chief economist Erik Bjørsted, it is the biggest fall in real wages in recent decades.

Several indicators simultaneously show that the Danish economy is growing again
After a slight dip in GDP growth in the first three months of the year, new figures from Danmarks Statistik point to a surprising 0.7 percent increase in the second quarter of the year. Michael Svarer – a professor of national economics at Aarhus University, who is also a former chief financial officer – told TV2 that the figures were “very positive”. Meanwhile, the employment indicator also showed a 0.7 percent increase in total employment in the second quarter. Despite the obstacles of sky-high energy prices and rising interest rates, Danish companies would appear to be highly competitive.

Water shortages in important rivers could further increase the cost of living in Denmark
The hot and dry weather in Europe in recent months has caused water levels in rivers to fall to extremely low levels. Rivers are an important way of transporting large quantities of goods and raw materials, and when large river barges cannot navigate Europe’s rivers it could lead to more expensive goods in Denmark. One of Europe’s most important waterways, the Rhine in Germany, is currently facing a water shortage, which will mean that imports from Germany are likely to become more expensive. Ole Sloth Hansen, the commodity analyst at Saxo Bank, told TV2 that transport and production are becoming increasingly expensive due to the pressure from the high energy prices.

Wind turbine manufacturer Vestas posts a loss in the second quarter
Vestas announced last Wednesday morning that its accounts for the second quarter of the year showed a pre-tax result of minus 139 million euros due to an increase in the cost of necessary components, energy and raw materials. Its revenue fell by 7 percent to €3.3 billion compared to the same period last year. Chief executive Henrik Andersen attributed this to geopolitical uncertainty and disruptions in the supply chain, which in turn led to higher costs. Its rival, Siemens Gamesa, which filed its accounts a fortnight ago, also had a dismal performance.

Maersk refuses to deliver higher taxes
For the first six months of this year, Maersk has declared a profit of 113 billion kroner, which is almost as much as the shipping company made in the whole of 2021. On Tuesday, it raised its 2022 profit forecast by more than 50 billion, and if Maersk achieves this, it will write Danish history with a new record for the biggest profit. The treasury wants Maersk to contribute more to the treasury, but Maersk’s chief executive sees no reason to pay more tax under the existing tonnage tax system.

Danish electricity prices reach their highest level in 12 years
Affected by a combination of factors including war, drought and a lack of wind, Danish electricity prices became exceptionally expensive during dinner time last Wednesday evening. According to data from the Nordic Electricity Exchange, the price rose all the way to 5.5 kroner between 19:00 and 20:00 that evening and, with taxes and VAT factored in, the actual price reached between 8 and 9 kroner. Jim Vilsson, the senior economist at Energinet, told TV2 this is a level that hasn’t been seen before. However, compared to other European countries, such as Estonia and Lithuania, where prices reached almost 30 kroner per kilowatt hour on Wednesday night, the Danish electricity price situation is still much better.

Lloyd’s Register marks 150th year in Denmark
This August, the British maritime technology company Lloyd’s Register (LR) is celebrating 150 years of business in Denmark. It has worked closely with Danish Shipping, the industry association for Denmark’s shipowners, and in recent years it has provided technical support for decarbonisation strategies and worked closely with the Danish shipping company Maersk and Torm.