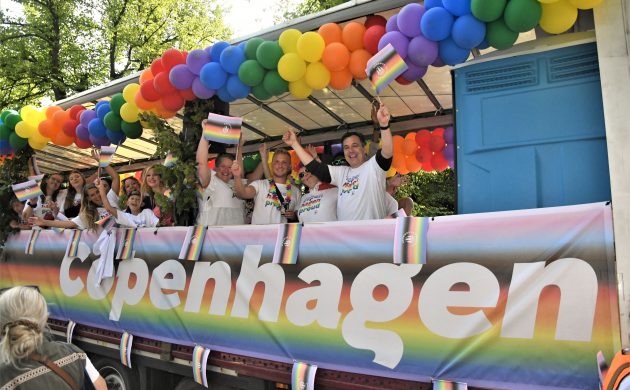 Over 130 events, 30,000 participants and a quarter of a million attendees at an unforgettable Parade, and countless others … the 2022 edition of Copenhagen Pride (August 13-21) will undoubtedly go down in history as a success.

With corona in rear view mirror, this was the chance to stage the first proper parade since 2019, and it’s no exaggeration to say they put on a hell of a show on August 20.

Raising awareness of …
With its chosen theme of freedom, Pride set a focus on upholding LGBTQ+ human rights around the world, zeroing in on Qatar – which has a death penalty for homosexuality – ahead of its controversial hosting of the 2022 World Cup.

Also in the firing line was Scandinavia, which has still not banned conversion therapy, Turkey for its ban of Pride events, and anti-trans organisations in the US and Russia.

Huge support
Leading the Pride Parade was LGBT Asylum on the occasion of its 10th anniversary, followed by the Ukrainian LGBTI+ delegation, present to highlight Russia’s extensive violations of human rights.

People went all out, coming dressed in the all the colours of the rainbow from head to toe. Many families also attended the parade with their children, helping to spread awareness of the human rights movement.

Michiel Maertens, Kerin Ayyalaraju and Henri Schumacher, the respective ambassadors of Belgium, Australia and Luxembourg, were in the parade as they moved down the streets of Vesterbro

Danish PM Mette Frederiksen also made an appearance, walking beside Lars Henriksen, the head of Copenhagen Pride since 2013