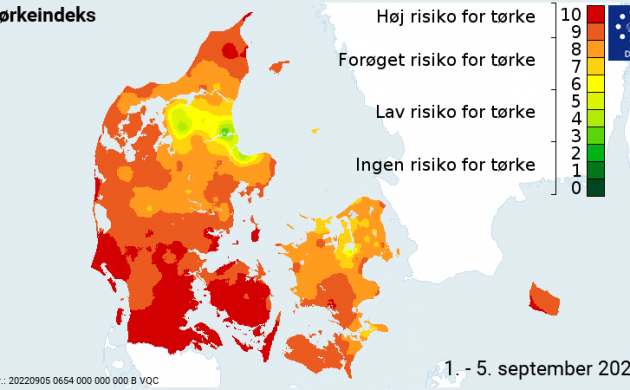 Here’s a sentence you wouldn’t normally expect to see: The Danish countryside is desperate for rain.

But it’s true nonetheless thanks to the driest August in 19 years and a Drought Index that is at its highest for this time of year ever measured.

Normally, August provides 82.1 mm of rain nationally on average, but this August only 46.6 mm fell. That has pushed the Drought Index up to 9.4 out of 10 at the moment.

Take into consideration that the average index figure for this time of year is just 3.7. And the previous record was at 7.6. Daily drought figures first began being registered back in 2005.

Relief on the horizon
It’s particularly bad in south Jutland, Funen and Bornholm, among other places, where the index has reached ‘full capacity’ at 10 out of 10.

The rain gauge in Nørreløkke near Sønderborg has registered a paltry 16.5 mm since August 1.

The good news is that rain is on the way.

A low pressure system from the UK is set to move across Denmark on Wednesday and heavy rain is expected on Thursday and Friday – 30-50 mm over the two days in parts of the country.

Meanwhile, temperatures are also predicted to drop, down to about 16 degrees on Friday.