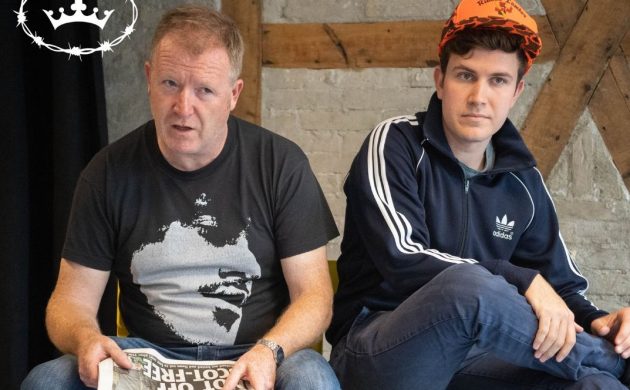 John Kelleher, who thousands know as the long-time quizmaster at The Globe and face of Gaelic sports in Denmark, is among the cast of a new play, ‘The Queen’s New Border’, making its worldwide premiere this Wednesday in Nordvest (all photos: CTC)
September 13th, 2022 1:19 pm| by Frank Theakston

With a change of monarchy just days into her shift, the new British PM Liz Truss certainly has her hands full.

After all, things were already bad enough with the aftermath of Brexit to deal with: the matter the British public were told that “Boris got done”.

Well, with the pandemic in the rearview mirror, its ugly head is emerging once again: brilliant timing for the opening of the Copenhagen Theatre Circle’s new play, ‘The Queen’s New Border’!

Worldwide premiere of Brexit play
An original work written by long-time member Alun Thomas, it looks at Brexit and the small matter of the border between the UK and the EU. With the Northern Ireland Protocol up for further negotiation very soon, it’s the political hot potato that won’t go away!

We do not of course know as yet what stance our Liz will take with the EU, though it is unlikely to involve a hard border between Northern Ireland and the Irish Republic. So this unlikely scenario provides an ideal setting for this hilarious satire.

The story follows the absurd and chaotic construction of installations for the new border controls. As the project descends into farce, the play shines a light on more serious topics and personal struggles, touching on universal themes such as love, deception, football, murder and Jaffa cakes.

But overshadowing the drama are the very real implications of Brexit for life in Northern Ireland, and the upheavals threatening to jeopardise the fragile peace.

Drawing on his experience
Alun Thomas is a world-renowned engineer originally from Northern Ireland.

Thus in his second play, he draws on his own experience, both personal and professional, lending humour to an otherwise seriously dangerous scenario with roots going back centuries.

This play exudes the infectious energy of a writer who is inspired by the subjects closest to his heart.

Please note that this play contains strong language throughout; parental guidance is advised.

Alun Thomas (Seamus) is the author of The Queen’s New Border. In his spare time he pursues various literary and theatrical endeavours, among which was to
produce an open-air play at the Edinburgh Fringe Festival in 2000. Since washing
up in Copenhagen 10 years ago, Alun has appeared regularly at CTC events such
as Open Stage and has performed in three plays at the Fringe Festival — the most
recent being Space Cadets, which he wrote, directed, produced and starred in!

Anant Atul Visaria (Ed) is originally from India, where he was active in theatre and street plays. Professionally he works as an energy consultant, but his heart lies with theatre. In an ideal world, he would prefer to spend his time performing on stage, writing and simply being silly with theatre folk.

María Francisca Díaz (Anne) holds a BA in Education from the Universidad Austral de Chile and an MA in English-Speaking Cultures from the University of Bremen. She is a teacher of English language and a theatre instructor, and has performed theatre in Chile and Germany. She recently moved to Denmark after marrying an Irishman.

Kathryn Dorgan (Fiona) originally hails from Ireland but has lived in Copenhagen since 1986. She is a relative newcomer to the theatre scene, her with most recent roles being in the Leftfield Theatre production of Queers in 2018 and CTC’s The Effect in 2020. Kathryn is delighted to participate in a play with an Irish theme, saying it reminds her of her roots: plenty of swearing and emotional outbursts, but mostly great craic!

John Kelleher (Gerry) is originally from Dublin and has been involved in acting for over 30 years. Throughout his time in Denmark, he has worked on numerous TV adverts, been involved with different theatre groups and also dabbled with some short and full-length movies. His first love has always been theatre and living in Denmark has allowed him the opportunity to work with some wonderfully talented actors, directors and playwrights. He always looks forward to the next challenge that the performing arts world throws at him.

Roger LeBlanc (Finn) is thrilled to be returning to the stage for his first performance in over ten years. While growing up in Littleton, Massachusetts, Roger acted and performed in several musicals and developed a strong love for theatre. Roger is also the Communications Officer for the CTC and is grateful to have found this organisation where he can grow, learn and build new connections.

Kathrine Lundorff (Mary) is delighted to be a part of The Queen’s New Border. Kathrine has an extensive background within the performing arts. She has performed professionally as a singer and dancer both in and outside of Denmark, but this is her first straight acting role.

Co-director Joan Bentsen is an actor from New York who has lived in Denmark since 1985. She worked at Jytte Abildstrøms Teater for many years, where her first role was as a kangaroo. She learned to puppeteer and toured Denmark with children’s theatre, including two solo puppet shows. She also worked on Danish television, playing Ælling in Bamses Billedbog. For the past many years, Joan has worked as a sign language interpreter.

After being brought up in a family of drama queens, co-director Iven Gilmore left home and enjoyed a brief hiatus before venturing back to performing at the age of 21 as a mummer with his show The Big Green Suitcase. Encouraged by a modicum of success, he went on to found Cirkus Hovsa, which included memorable acts such as Clarence the tangoing lion, Bill and Ed the performing fleas, and the armless synchronised swimmer known simply as Bob.