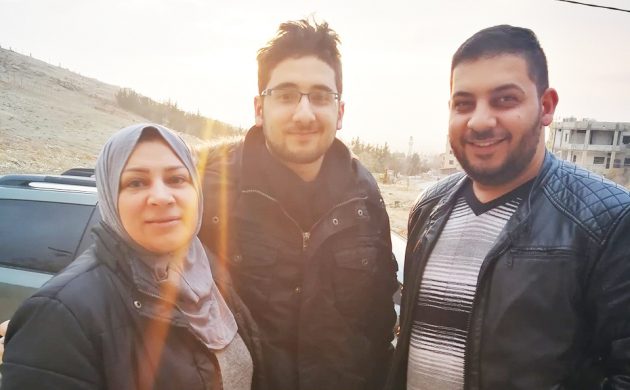 Samia Farhat with two of her three sons (third is in image in story) who Denmark has prevented from visiting her
October 1st, 2022 5:46 am| by Lara Bodger

A woman with limited vision has been denied a visit from her children as she battles life-threatening cervical cancer.

Based overseas, they might be denied a chance to see their mother before it is too late.

Spread to lymph nodes
Samia Farhat, who is in her 50s, moved to Denmark in 2013 from Lebanon. She was diagnosed with cancer in January 2022.

The disease is now at an advanced stage and has spread to her lymph nodes – necessitating an aggressive treatment plan that requires daily radiation and weekly chemotherapy.

Despite countless visa applications, Farhat’s three adult sons have not been able to visit their mother in her new home.

Lebanon is regarded as a high-risk country for immigration by the Danish authorities, but the law states that in circumstances of life-threatening illness, a visa can be granted.

However, despite letters from Farhat’s GP, oncologist and psychologist describing her condition, the application of one of her sons, the Beirut-based political journalist Hussein El Hajj Hassan, has been denied on the basis there was no proof of the exceptional circumstances.

Rejection “incomprehensible”
Hassan’s subsequent appeal was then rejected by the Immigration Appeals Board due to “reasonable doubts” about his intention to leave Denmark following the visit.

Hassan contends that this to be solely down to assumptions made about his Lebanese nationality.

“It is completely incomprehensible to me that Samia Farhat’s son has not been granted a visa to visit his mother,” he said.

“Samia Farhat has a life-threatening illness and is completely and utterly dependent on help and support.”

Disabled and alone
In Denmark, Farhat is regarded as disabled, as she only has three percent vision in her eyes. This makes it difficult to maintain a normal life and take care of herself. She lives alone and has been unable to prepare healthy food to support her healing.

Hassan described the turmoil his mother has been facing: “My mom went through all this by herself; it was so exhausting for her. She didn’t even have the appetite to drink water after her treatments.”

Despite the chemotherapy, the cancer is continuing to grow and is spreading all over Farhat’s body.

The treatments have also left her with severe side-effects, described by Dr Nøttrup as including severe tinnitus, muscle pain, nausea, a reduced appetite, fatigue and sensory disturbances.

State’s stance misguided
Hassan works as a journalist but has been prioritising supporting his mother emotionally as he cannot be there in person.

He’s attempted to keep her spirits up by calling her daily, “staying on all day, just so she had the sense that there was someone on the other side listening to her … otherwise, she wouldn’t have survived, as she told me once.”

Farhat is currently undergoing another round of chemotherapy, but without family support, Dr Nøttrup is pessimistic about her prospects: “I have great concerns about whether she will manage on her own without the support of her family”.

The Immigration Appeals Board suggests that Hassan can reapply for a Schengen visa if his mother’s condition has worsened. However, in the time that the new application will take to be lodged, Hassan fears it will be too late.

“They’re not considering her fundamental human rights and rights as a patient. She’s at a very advanced stage of cancer, and she needs someone by her side to fight this battle and to win. This is the priority, not anything else,” he said.