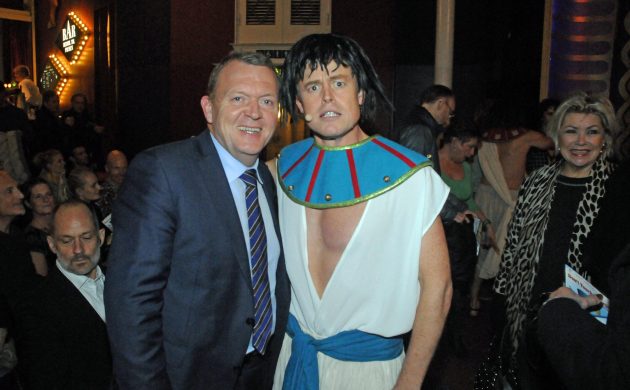 The former PM and the former president. Let’s hope Lars doesn’t get caught with his pants down (photo: Hasse Ferrold)
October 21st, 2022 5:43 pm| by Ben Hamilton

Danish actor Caspar Phillipson probably thought the most controversial moment of his career – when he was sued by London Toast Theatre for sneaking off to Paris to audition for the role of JFK in ‘Jackie’, even though he was contracted to star in the Crazy Christmas Cabaret at Tivoli – was behind him.

But he would be wrong, as the whole world is up in arms about his cameo in ‘Blonde’, the new Netflix film depicting the life of Marilyn Monroe.

The two-minute scene has been condemned as “horrifying”, “insane” and “disrespectful” by viewers, who could not be certain whether the penis was real or as fake as the excuse Phillipson gave to London Toast in 2014 – namely that he was at home due to poor psychological conditions at the theatre.

Hart Bageri name-dropped on trending US restaurant drama series ‘The Bear’
There’s no doubt that Disney series ‘The Bear’, with a whopping 88 on Metacritic, has been one of the most acclaimed TV shows of the year. Set in a New York takeaway joint, it tells the story of a world-renowned chef who returns to take over running the hard-up establishment following the death of its previous owner, his brother. It transpires the chef has previously worked for Noma, but that isn’t the only Copenhagen culinary name-dropping going on, as in episode 5, the chef in charge of desserts suddenly reveals his biggest inspiration. Hanging on his wall is a picture of Richard Hart, who the chef confirms is the British owner of top Copenhagen pastry establishment Hart Bageri before making some doughnuts. Which is nice … although Hart Bageri doesn’t make doughnuts. Cardamom bun beauties on the other hand … now you’re talking.

Konservative leader loses out on ‘LGBT+ Person of the Year’ award to a comedian
Despite enjoying a momentous year, Søren Pape Poulsen missed out on being named ‘LGBT+ Person of the Year’ at the annual Danish Rainbow Awards at Cirkusbygningen in Copenhagen. Instead comedian Nina Rask won the prize. However, not every politician went home empty-handed, as Helle Thorning-Schmidt won the ‘Ally of the Year’ award. “As prime minister, she introduced the right to marriage for same-sex couples, and she was the first prime minister to join Copenhagen Pride,” applauded the jury.

Whopping crowds turn out for Culture Night at Danish Parliament
Culture Night has never taken place during an election campaign before, so it was no surprise to see so many people attend the events traditionally hosted by Parliament on October 14. In total, more than 8,000 people turned up, forming colossal queues ahead of the doors officially opening at 18:00.

Matador star to play Margrethe in musical
It has been confirmed that ‘Matador’ star Ulla Henningsen will play Queen Margrethe as she is today in the new musical about the monarch’s life, which will premiere at the Royal Theatre on June 23. In total, four actresses will play the queen in ‘Margrethe’, with singer and actress Xenia Lach-Nielsen taking on the task of portraying Margrethe through the first 30 years of her reign. Henningsen played Iben in ‘Matador’, the wife of the bank manager.

Tracking down the missing Danish Order of the Elephants
You’ve probably heard of the Danish Order of the Elephant, the country’s top honour, which is awarded to Danes and internationals who truly excel. A smallish medal bearing an elephant and diamonds, it is designed to be worn around the neck or on a jacket. However, once the recipient dies, it should be returned, but according to the DR program ‘Jagten på Elefantordenen‘ (the hunt for the elephant order), many have not been returned and ended up in museums and private collections. For the purpose of the program, the hosts visited countries including France, Ethiopia and Russia in a bid to find some of them – an estimated 70 should be in circulation at any given time. Historically, recipients include Niels Bohr, Mærsk Mc-Kinney Møller, Napoleon, Winston Churchill, Nelson Mandela and Haile Selassie.

Matriarch of the stage: Theatre will outlive Netflix! And Instagram is boring!
On the occasion of Danish theatre celebrating its 300th birthday, distinguished Danish actress Ghita Nørby has made a bold prediction: it will outlive Netflix. “We don’t need to be afraid of the theater’s survival at all,” the 87-year-old Matador star told DR. “It will exist long after we have all blown up and the globe has gone under. It may be down in some hilly valleys, but then it will come up again. The theatre outlives us all because it is much stronger than Netflix.” However, she would not go as far as saying it “is alive and well”, conceding that it needs a boost. But while she was scathing of Netflix, Instagram is something she can’t relate to at all. “It seems boring, selfish and empty,” she said.

Icelandic design studio to sue Danish brand
Icelandic design studio Flétta last week announced that it is taking legal action against Danish brand Ferm Living for infringing the copyright of its ‘minute candleholder’, reports the Reykjavík Grapevine. “It saddens me to see a Danish brand like @fermliving stealing that idea, and not only creating unfair competition for a small studio, but more destroying the very purpose of this beautiful message completely,” wrote the candleholder’s Danish designer Martin Clausen on Instagram. “The reason brands get away with this is because consumers care less about authenticity and more about price.”

How ‘The Exorcist’ was inspired by a classic Danish movie from 1955
Slashed.com has been reflecting on how one of the world’s most revered horror films, ‘The Exorcist’, was inspired by the Danish masterpiece ‘Ordet’. Directed by Carl Theodor Dreyer in 1955, the film website observes that it is “a film so heavy that it has its own gravity”, adding: “That is to say, a patient viewer who makes it past the film’s austere opening movements will likely find themselves locked in its grip.” ‘The Exorcist’ director William Friedkin called ‘Ordet’ the “most spiritual movie” he’d ever seen. “It shows a literal resurrection, so believable. I knew because of that film that I could show a literal exorcism. So I thought a lot about that film while I was shooting mine.”

How PM Mette Frederiksen inspired the latest season of ‘Borgen’
‘Borgen’ creator and screenwriter Adam Price has confirmed that PM Mette Frederiksen was a major influence on the plot of season four – namely her top-down leadership and tendency to centralise authority. “We have a premise for Borgen … can you remain in power and still remain true to yourself?” Price told Reuters. “Naturally, we were inspired by elements in the character of our current PM.” Price revealed that the decision to make a fifth season following main character Birgitte Nyborg to her new job at the EU in Brussels does not lie with him. “I’m sure a lot of people in the UK would enjoy that, especially if we weren’t very friendly towards Brussels,” he quipped.

Banned by eBay: Dahmer might be Denmark’s most popular Netflix show, but you can’t buy the outfit!
If you were thinking of dressing up as Jeffrey Dahmer for Halloween, forget it. The series depicting his life might have been the most watched program on the Danish Netflix site this autumn, but online marketplace eBay has banned the sale of US prison clothing – the orange jumpsuit most associated with the cannibalistic killer. However, Amazon continues to sell the clothing, along with glasses that resemble the ones he wore and t-shirts with slogans such as “I eat guys like you for breakfast.”

Vandalised painting returned to museum
The Asger Jorn painting ‘Den Foruroligende Ælling’ has been restored and returned to its home at Museum Jorn in Silkeborg following its vandalism in April. Ibi-Pippi Orup Hedegaard used a permanent marker and glue to make what she called a modification, claiming she was only doing what Jorn did, when he created the work in 1959 as part of his Modifications series by painting over an older painting he bought at a flea market.