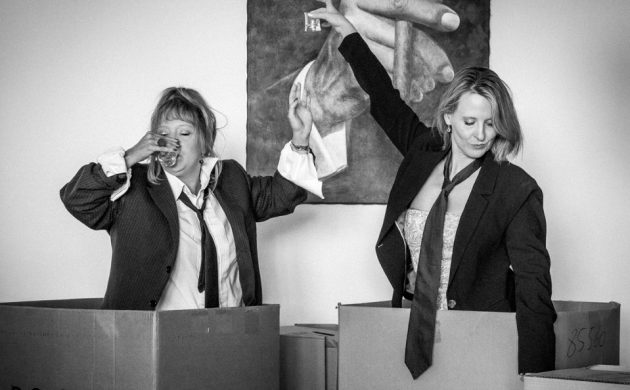 Normally, it’s the Swedes who cross the Øresund in search of the booze! After all, there’s a low volume limit on the beer sold in their supermarkets, and you can only buy spirits from specialist shops where you’re required to queue … often for a whole day.

Visit any Copenhagen centre bar or pub before midday in November or December, and you’re guaranteed to find a party of Swedes enjoying a few swift ones before they go about their shopping. And Norwegians too – after all, a pint of beer in Oslo will set you back over 100 kroner!

But this weekend, a Danish-based group, HIT International Theatre Arts, is taking the booze in the opposite direction. It is staging the play ‘Vodka Talks’ and, for once, the drunkest people in the theatre will be on stage!

English-language premiere of German play
‘Vodka Talks’ is the debut play of Danish author Arne Nielsen … which he wrote in German. Now that does sound like the result of a long night on the town.

It has been touring Germany to great acclaim – a journey almost as nomadic as its creator’s. Tinker, tailor, soldier, sailor – well, two out of four, although he was probably a mischievous child. He’s also dabbled in diplomacy and electro-pop.

While Nielsen is a theate rookie, the team adapting his play are anything but. Active since the 1970s, Danish director Lars Junggreen is a legendary veteran of Danish theatre. While the two stars of the show, Jana Pulkrabek and Vanessa Poole, are equally familiar with the stage … and each other. Recent collaborations include ‘HAP’ in Hamburg last year and ‘The Clean House’ in Copenhagen in 2019.

Busy season for HIT International Theatre Arts
In ‘Vodka Talks’ – which will be performed  in collaboration with Playmate Theatre Malmö from November 11-13 at Bastionen Theatre, and then April 20-22 at Teatert ved Sorte Hest in Copenhagen – two sisters share revelations and stunning discoveries as they sort through their late father’s estate.

For HIT International Theatre Arts, ‘Vodka Talks’ is not the only play of its 2022-23 season written by a debutant playwright, as in the late spring the group will be staging ‘Don’t Mention the War’, an English-language satirical work set in Denmark that reflects on the build-up, execution and aftermath of Brexit.

Sounds like vodka will be needed for that one too.

Ballet head looking over his shoulder following racism claims about ‘Othello’
Nikolaj Hübbe, the artistic director of the Royal Danish Ballet, has been living in fear since claims of racism were made in relation to his production of ‘Othello’, which had been scheduled to premiere on November 5 but was cancelled. He told DR he found himself “looking over his shoulder” in light of the vitriol nature of the outcry. According to A4 Ligestilling, a planned sequence of the ballet, based on choreography by John Neumeier, required performers to beat themselves on the head whilst making monkey sounds. Some claimed it was a stereotypical interpretation, but Hübbe claims this description, of what is a warrior/tribal dance, is “a bit distorted”. Right-wingers have also been up in arms, and Dansk Folkeparti politician Dennis Flydtkjær has even asked the culture minister, Ane Halsboe-Jørgensen, to intervene.

Seven European Film Award nominations for films with Danish links
The Danish-produced Iranian-language film ‘Holy Spider’, the country’s official selection in the Oscars this year, has been nominated for four European Film Awards: Best Film, Best Screenplay, Best Actress for Zar Amir Ebrahimi, who won the award at Cannes, and Best Director for Ali Abbasi. Additionally,  Simon Lereng Wilmont’s ‘A House Made of Splinters’ has been nominated for Best Documentary and the Danish-based Croatian actor Zlatko Buric has been nominated for Best Actor for ‘Triangle of Sadness’. He will face competition from Danish-American actor Elliott Crosset Hove for his role in the Danish-Icelandic film ‘Vanskabte land’ (‘Godland’). The award show will take place on December 10 in Reykjavik.

Roskilde Festival explains why it wants to be more diverse
The Roskilde Festival has confirmed its first 16 acts for its 2023 edition. Upon their announcement, the festival explained they represented how the festival would in the future be embracing a more diverse future in which the key characteristic is ‘movement’. “Whether it is a showdown with existing societal norms or an exploration of one’s own identity, the program package emphasises that it is through art and culture that we tread new paths in life,” it noted. “Roskilde Festival must be synonymous with curiosity and diversity.” The acts include Ghanian gospel star Florence Adooni, Nigerian singer Burna Boy, and alternative K-Pop group LEENALCHI. Full festival tickets for next year’s edition cost 2,400 kroner and one-day passes 1,200 kroner via roskilde-festival.dk. The festival will run from June 24 to July 1.

Portuguese pop-up to open in Tivoli at the end of next week
Vistas Rui Silvestre, a Portuguese Michelin-star restaurant, will be inhabiting the Japanese Tower at Tivoli from November 19 to December 31. Headed by chef Rui Silvestre, who became the country’s youngest Michelin chef at the age of just 29, the Algarve pop-up will serve Portuguese dishes featuring the likes of  bluefin tuna, Carabineiro prawns and lemon caviar, as well as a few Christmas specials. Silvestre, who draws on both his India and Mozambican roots for inspiration, favours menus in which the ingredients do the talking.

Ballet featuring Queen’s artwork to return to Tivoli for Christmas run
Tivoli’s Christmas line-up this year includes the return of the classic ballet ‘The Nutcracker’ – a show that Queen Margrethe II has designed the scenography and costumes for. It premieres on November 26 and continues until December 23. Set to the classic music of Pyotr Tchaikovsky, Peter Bo Bendixen’s choreography cleverly blends the story with Tivoli’s attractions, taking us all back to how the themepark looked in 1874. Tivoli will be opens for its Christmas season from November 19 until December 31. The star attraction this Christmas is the brand new home for Santa, while the biggest firework shows will be held on December 25, 26 and 31 at 23:00.

How a museum sets an example for immigrants
Visitors to Østerbro museum Den Hirschsprungske Samling this November can choose between English and Danish-language options to enjoy ‘Layers’, a hybrid art and performance show arranged in and around an exhibition by Ejnar Nielsen. Over the last two weekends of the month, both Saturday and Sunday 15:00-16:30, visitors can enjoy sound installations, performances, dance and storytelling. “I fell in love with the history of the museum: how it was founded by a Jewish family that decided to make Denmark their home,” explains the project’s creator Delia Trice. “It speaks a lot about immigration, and how we as newcomers can contribute to our new country’s culture.”  Entry costs 150 kroner.

Zak Abel confirms Pumpehuset performance
British singer-songwriter Zak Abel is performing at Pumpehuset on May 3. His deep vocals and R&B-inspired pop have won him plenty of fans, although his most recognised works so far have been songs written for other artists, such as  Paloma Faith and John Legend. Tickets cost 225 kroner via ticketmaster.dk.

Macklemore to perform at Vega in May
US rapper Macklemore is performing at Store Vega on May 7, where he will be promoting his new album ‘Ben’ as part of a 19-date tour. It is now ten years since he and Ryan Lewis released their GRAMMY-award winning hip-hop album ‘The Heist’. Tickets cost 400 kroner via ticketmaster.dk.

Gazza’s coming to Glassalen
It’s probably old news to some, but former England national football player Paul Gascoigne will be reflecting on his life and career at Glassalen in Tivoli on January 21. Tickets cost 400-500 kroner, while a VIP option includes a meet & greet with the star a few hours before the show in the Tivoli bar Anarkist, which includes beer and pizza (isn’t providing that normally Five Bellies’ job?).

Globe Irish Pub celebrates 25th birthday in style
The Globe Irish Pub celebrated its 25th birthday over the weekend with a party attended by former staff and past and present friends. Landlord Brian McKenna and his wife Nikki turned back the clock a quarter of a century, inviting party-goers to turn up in their favourite 1990s garb. Movies were a popular theme, and a surprise guest stole the show with a tribute to 1994 film ‘The Adventures of Priscilla, Queen of the Desert’. The Globe opened the same week as That Theatre Company. Its founder Ian Burns remembers it well: “Our first show coincided with The Globe’s opening night. So when most of the audience took up my offer of a pint next door, we arrived in an almost empty bar, at which point Brian the landlord nearly fell off his barstool”