City centre bar Bootleggers will take you back to the Prohibiton era (All photos: Alexandra Shaporeva-Gathelier)
October 3rd, 2015 6:50 pm| by Ella Navarro

Right next to Torvehallerne, we found Bootleggers, a Prohibition era-inspired bar run by manager Eugene Melnik, who invited us into his illegal world and pampered us with a night of guilty pleasures.

It truly is a place for the prohibited, whether it’s tastes, new flavours or secrets. As Bernard Shaw once said, and they state on one of their walls: “Alcohol is the anesthesia by which we endure the operation of life.”

Never too young to roar
Melnik is only 25 years old. So young and already manager, we were impressed. Originally from Latvia, he started off as a dishwasher. His ambition, hard work and talent helped him climb the ladder and took him to the position where he is now.

In spite of his age, Melnik draws his inspiration from the 1920s and the 30s, which is why the bar’s named after the illegal transporters of alcoholic beverages during Prohibition, an era that lasted from 1920 to 1933 leaving nobody any wiser what its real goal had been. If anything, the speakeasys made people drink even more. Still, it wasn’t just the gangsters who profited as creativity flourished too as people rebelled against a common enemy (not too dissimilar to Vietnam).

There is a charm in “trying to go back”, Melnik explains, because we all know forbidden things attract and intrigue people. And this is what the guys at Bootleggers want to bring back to life: that period of excitement when people went crazy for what was being denied them and it became glamorous to be secretive.

“It’s all about the gimmick: making you live a night like it’s the roaring 20s!” says Melnik. 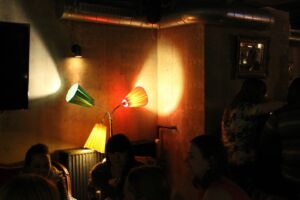 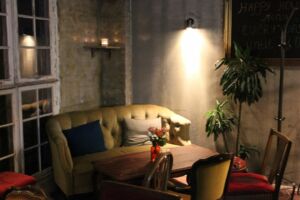 Castro would love it here!
Together with Leonardo Flores, the main bartender, this duo will leave you dazzled and astounded by the magic they perform behind the bar. Flores is Chilean, so we exchanged some Spanish, but he has lived most of his life in Denmark. His gift radiates through his mixing show, of which the end-result is exquisite from the very first sip to the last, a swallow that leaves your palate painfully asking for more.

Perfect for the ladies and no doubt inspired by my choice of cherry lipstick for the night, Flores first offered us the ‘Red Lips’ cocktail. But don’t worry, it won’t sabotage your make-up although you’ll be staggered by its mix of berries and white chocolate.

However, it doesn’t take us long to realise that the gentlemen are the more pampered ones here! A cocktail called ‘Cubed Old Fashioned’ comes with a bonus: a golden envelope containing a fine Cuban cigar and a discount at The Gentleman’s Store, where you can drop by the next day if you survive the night!

I just hope the next time ‘Red Lips’ comes with a free lipstick. Is that negotiable? 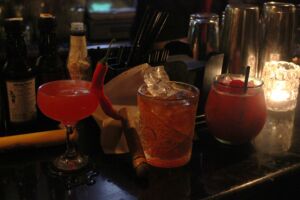 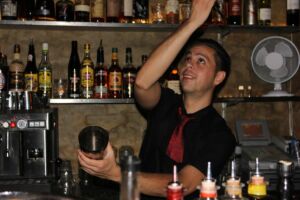 Some like it hot!
After all that fun, our night ended in spicy fashion. Captivated by the idea of trying chilli in a drink, I dared myself to try the ‘Chilli Berry Martini’, which I now regard as my favourite. First you’re hit by the sweetness, then the alcohol and finally the tabasco, and boy is that some feeling. The ‘Mexican Salad’ also comes recommended if you like it hot.

“We like pushing it to the limit,” says Melnik, who advises everyone to stay alert for the events they host every weekend to surprise their customers and keep them on their toes. Just like at a speakeasy, your whole evening can be transformed in the blink of an eye.