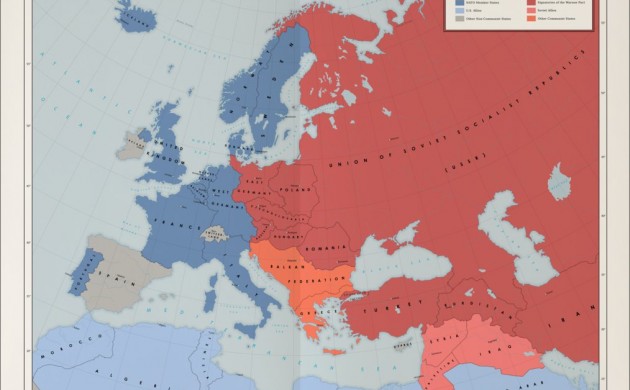 In addition to making northern Norway and the whole of Finland part of the Soviet Union, the map hands the West German state of Schleswig-Holstein over to East Germany.

Meanwhile, over in the Mediterranean, Greece and something the mapmaker called ‘the Balkan Federation’ –  a combination of Albania, Yugoslavia and Bulgaria – are all listed simply as “other communist states”, while most of the Middle East are listed as  “Soviet allies”.

Turkey, which is also included as part of the Soviet Union, has been a part of NATO since 1952.

Seriously?
It seems the publishers had borrowed a completely fictional map created by Icelander Andri Jónsson originally published on the Deviant Art website. It took an observant reader to point out that the map did not reflect anything resembling accepted modern history.

“Naturally, I was surprised,” Jónsson told Norwegian broadcaster NRK. “I don’t understand how this could happen. But first and foremost, I think it’s funny.”

On the Lindhardt & Ringhof Facebook page, the editor responsible for social studies and history, Stefan Dybdal Emkjær, initially claimed the map was wrong because it had used “the wrong colours”.

“Originally, I thought the publisher had not looked at the map properly and that it was a mistake made in haste,” Jansson told Politiken. “But it turns out that the editor knows very little about history. I do not have the words to describe the lack of professionalism that was displayed.”

Minor details
According to Emkjær, the person responsible for the mistake was looking for a map illustrating the Cold War period in Europe and “missed a few details”. He also said the authors of the book had originally suggested another, more accurate map.

Emkjær said that no upper-secondary students (ages 16-19) have used the book, which was still being vetted by teachers. Sales of the book have stopped, and the company has promised to release a new version.